I thought I'd put up a post highlighting some of the nicer moments in the comics. In Superman #96 (March 1955), there was a story about the Girl Who Didn't Believe in Superman. The Daily Planet is holding their annual "Lovely Child" contest, and Alice Norton is the winner of $1,000 and an around the world tour with Superman. But there's a catch: 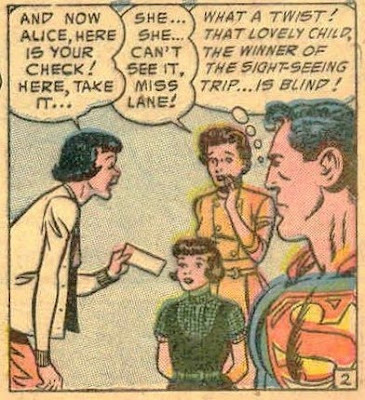 We learn that she became blind after a car accident. And it turns out little Miss Norton is quite the skeptic: 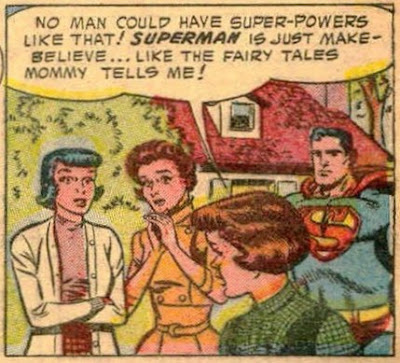 Superman is determined to prove that he does exist, but Alice has a rational explanation for every super power he demonstrates: 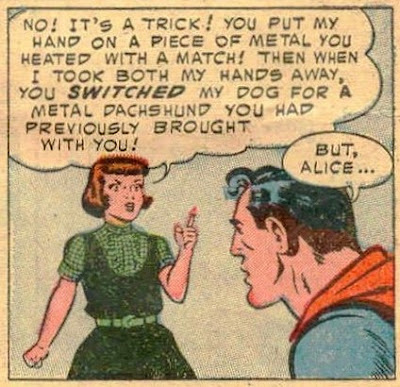 But then he discovers that Alice's blindness may be caused by a tiny sliver of glass behind her optic nerve. Paging Dr Superman:

And sure enough, the surgery is successful. Alice gets her sight-seeing tour: 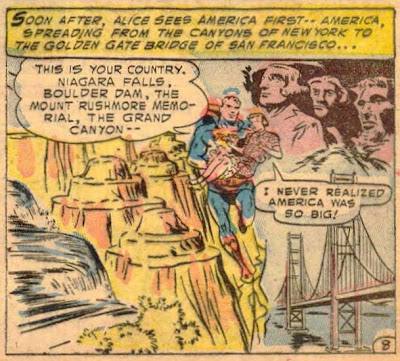 And it gets even better. Superman spots some vagabond spying on the Norton residence, but it turns out to be Alice's father. He's been consumed with guilt ever since the accident. Mrs Norton tells him that the car's brakes were faulty and that it wasn't his fault. The family is reunited and in the end: 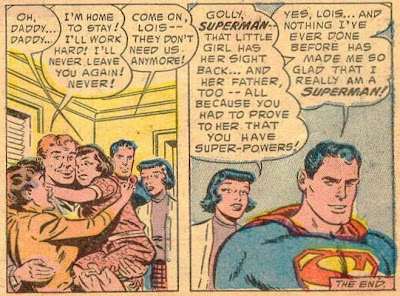 In Superman #97 (May 1955), we learned the story of Superboy's last day in Smallville. He did a lot of civic improvement for the town and the people turned out for a farewell: 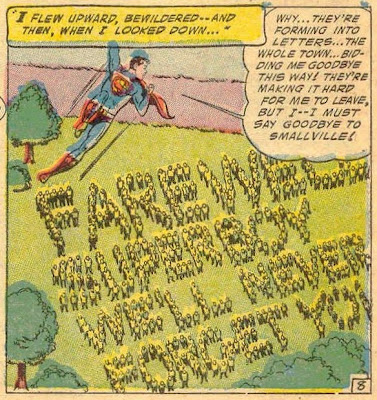 Update: As requested by longtime blog-buddy Bill Jourdain, I'm including reprint information on these two stories.

Superboy's Last Day in Smallville was reprinted in 100-Page Super Spectacular #DC-18 (1973) and in a Pizza Hut Collector's Edition (1977) of Superman #97, as well as the Superman in the Fifties:


Update II: An anonymous commenter points out that the Superman in the Fifties book notes that the story of the blind girl saved by Superman also appeared on the Adventures of Superman TV show. I found mention of the episode here. It appeared on TV about a year before the comic book version.
Posted by Pat at 10:11 AM

Gotta love those "tear jerker" stories from the 1950's. Great stuff! Have any of those stories been reprinted?

Saving a little girl's sight (and her family) is a delightful tale indeed. Activities like this used to be all part of being a real Super Hero. I recall a moment (only three panels, not full story) where Thor, Black Panther, and Captain America made a public appearance handing out toys to less fortunate children.

There'd be far fewer "Registration Acts" and "Kryptonians banned from Earth" if the heroes did a little more good deed P.R. like this.

I was just looking through Superman in the Fifties yesterday. It was mentioned that "The Girl Who Didn't Believe in Superman" was also an episode of The Adventures of Superman under the title "Around the World with Superman." They didn't say which came first though.