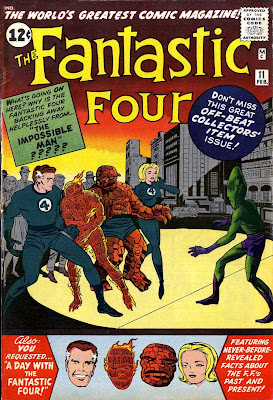 After awhile, I'm sure that comic fans winced whenever they saw the word "offbeat" on a Marvel cover, as it seemed to indicate, "We ran out of ideas this month so we decided to try being funny."

As the story begins, we see more of the fourth-wall breaking that first appeared in FF #10. The new Fantastic Four issue is coming out and there's a line out the door of the newsstand as folks clamor for the latest story featuring their heroes. Kids play at being the various members of the team: 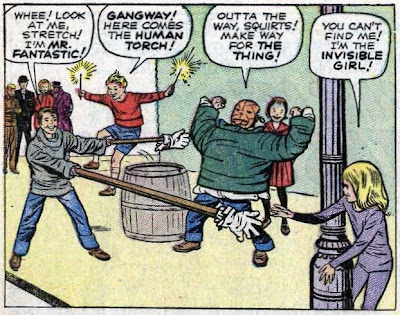 When the FF get to the Baxter Building, they find tons of fan mail, including a jack-in-the-box punch for the Thing from the Yancy Street Gang (their second mention). Later, Reed comes up with another serum to try to turn him back into Ben Grimm: 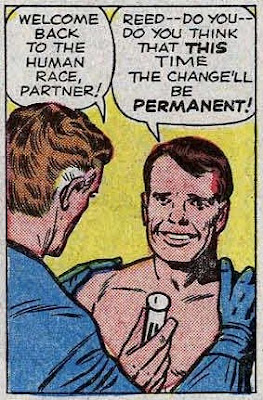 Not to ruin the suspense or anything, but it wasn't permanent. Via a flashback, we learn that Reed and Ben had been roommates in college. And afterwards: 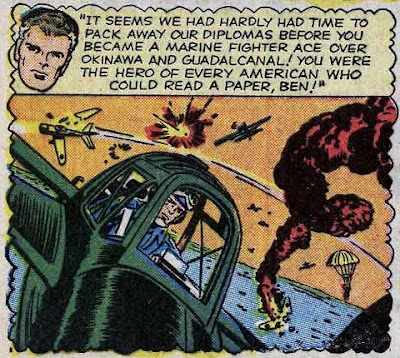 Of course, back then (1962) you could argue that this made Reed and Ben merely in their late-30s; nowadays they would have to be geezers to have fought in WWII. We also learn that Sue was Reed's girl next door, although of course that's getting into some pretty murky territory. If Sue's as old as Reed, how can she have a teen-aged brother? Anyway, they go on to reminisce about their origin as the Fantastic Four, and then mention the adventures they've had. But Sue wails a bit that the others have had adventures, while she's been something of a fifth wheel: 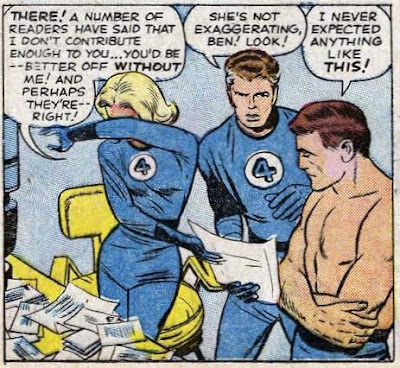 It's a reflection of a debate that had been going on in the FF letters page about how useless Sue's invisibility power was. Which is certainly true; hence the force-field ability that she began to develop not long afterwards. But it's rather amusing to Reed and Ben defending her as a valuable member of the team to the readers.

And then it turns out that it's Sue's birthday, and Reed, Ben and Johnny have baked her a cake. Ben turns into the Thing again, and Sue realizes that her problems with the FF's readers are trivial compared to him turning into a pile of orange rocks. And the story ends on that note.

Comments: Certainly an oddball tale, but it does show that Stan and Jack were paying attention to the readers and trying to promote Sue as a more valuable member of the team than we might otherwise assume. IIRC, this is the only FF issue that features two different self-contained stories.

The second story is the cover one, and it's quite "offbeat". The Impossible Man comes from the planet Poppup in the Tenth Galaxy. He possesses amazing powers, including flight, teleportation, the ability to turn his body into steel, etc. He shows up at a hobo jungle and asks for some food. They tell him he has to get some money, so: 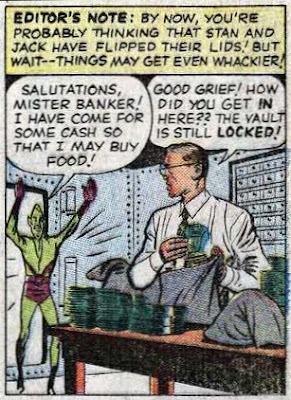 After robbing the bank, he grabs a meal at a restaurant where the FF encounter him. They discover his extraordinary powers. After some battling: 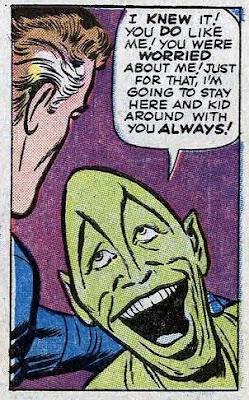 So he's sort of the Marvel equivalent of Mr Mxyzptlk or Bat-Mite. But Reed figures out how to get rid of him: 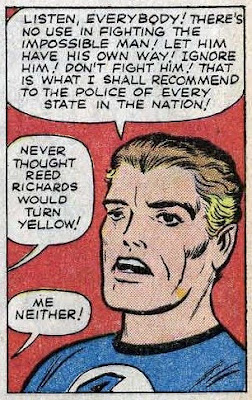 And that turns out to be the solution; the one thing the Impossible Man can't handle is being ignored.

Comments: Not Marvel's finest hour, by any means. The Impossible Man did not return for many years.
Posted by Pat at 1:11 PM

A few years ago, when Marvel redid this issue for "Marvel Age Fantastic Four", the useless member of the team focused on was Reed rather than Sue.