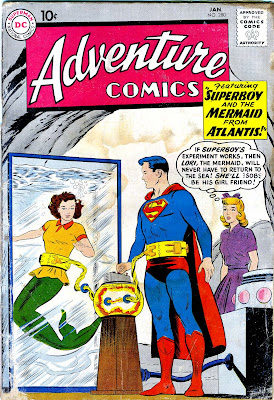 This story is symptomatic of one of the major problems with Superboy in the Silver Age. Characters that had been introduced in the Superman books often ended up appearing in Superboy, even though that appearance contradicted the Superman tales. Lex Luthor, who for years had bedeviled the Man of Tomorrow, turned out to have been the best friend (however briefly) of the Boy of Steel. Lois Lane and Mr Mxyptlk also appeared in the Superboy chronicles, so it was perhaps inevitable that Lori Lemaris would also pop up in Smallville eventually. Never mind that we had been assured in her first Superman story that she was a girlfriend of his during his college years at Metropolis U.

The story itself is a classically zany Silver Age tale. Superboy decides to help out a local "aquarium" (really an aquatic zoo) owner by bringing him terrific attractions like electric eels, sharks and a giant whale. Lori and her friends observe this from under the sea, and Lori lies a bit shamelessly: 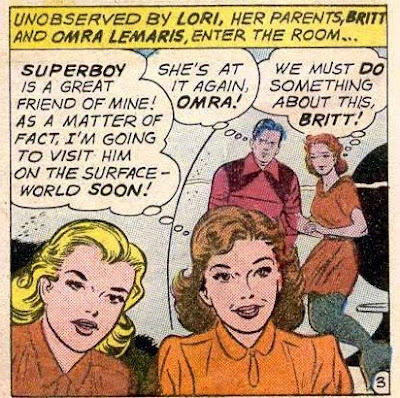 It turns out that Lori is bored with Atlantis. BTW, those who think that there wasn't an explanation for the Lori Lemaris Atlanteans and the Aquaman contingent are wrong:

Lori decides to get Superboy to "rescue" her from a floating mine. When he does, she again indulges herself in a whopper: 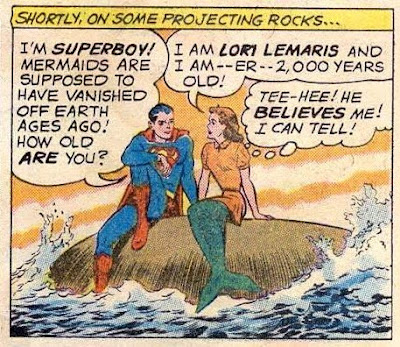 But she trips herself up with a bit of "proof": 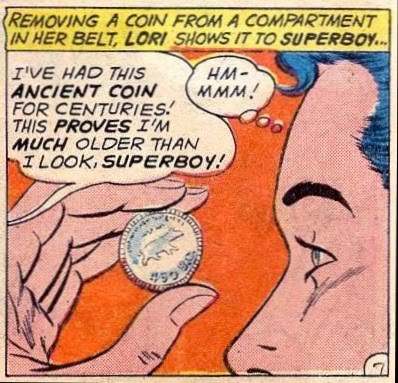 Of course, this was something of a cliche in the Silver Age; since BC means "Before Christ", nobody would have dated a coin 450 BC; that was the year applied after the birth of Jesus became considered a dividing point.

Lori explains that she wants to live outside the water, as a normal girl, and believes that Superboy will be able to accomplish this. He sets up the experiment, but Lana comes along: 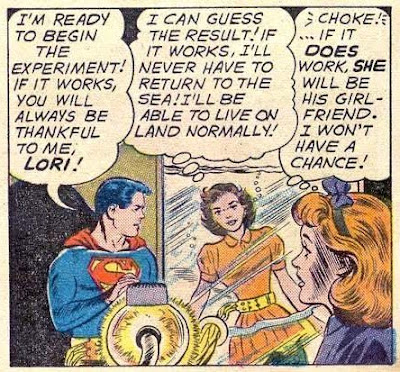 The experiment will take 24 hours, during which time Superboy is away on a space mission. Lori is so confident the procedure will work, that she gets out of the water and drains it off. Bad move: 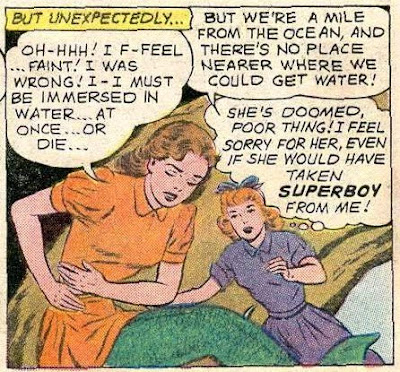 Say what? Smallville only a mile from the ocean? I guess we can rule out Kansas as the location of Superboy's hometown. Fortunately, Lana remembers that there's a pool inside the cave, and it turns out that the experiment was not to let her live on the land, but: 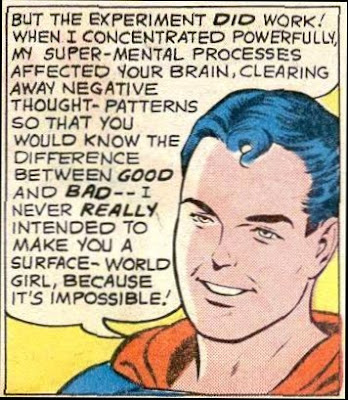 Still, how do we get to where Superboy and Lori have no memory of ever meeting before their college days? Lori's father goes to work: 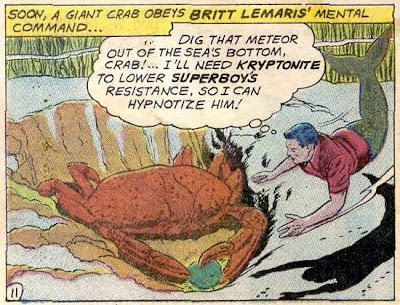 Yep, he hypnotizes Superboy, Lori, and Lana into having no memory of the incident.

Comments: It's pretty obvious why this story has never been reprinted (as far as I know). The details are weird, the hypnotism bit makes little sense (except to get Weisinger out of the problem of explaining why the story contradicted Lori's first Superman appearance), and Lori's compulsive lying puts her in a bad light. On the other hand, there is a rare good bit of characterization for Lana Lang, as she saves Lori's life despite fearing that Superboy will prefer the mermaid.

The Congo Bill/Congorilla tale is a fairly pedestrian tale. Congo Bill is hit on the head, and when he changes into Congorilla, he does some oddball things, changing into characters from a nursery rhyme:

The story was dusted off and reused a few years later in a Superman story in Action Comics.

The Aquaman story features Aquaman and Aqualad helping out with the TV show, Sea Chase. This is a reference to a popular syndicated TV show of the times called Sea Hunt, starring Lloyd Bridges and two of his sons, Jeff and Beau Bridges.

Update: Commenter Osgood Peabody points out that the story has just recently been reprinted in this volume:

This is such a weird mix. The whole idea of young Lori Lemaris having an ordinary teenager personality trait like making up tall tales, as well as Lana Lang being sympathetic and helping someone she considered a rival…both of these are pure Jerry Siegel at his best. Out of all the Superman writers, he always put the female characters in the most sympathetic light. But the plot mechanics are just so contrived, and that "brainwashing you to be good because fibbing is by definition evil" thing is beyond disturbing. (Siegel also tried it out in a Legion story, as I recall.) If only that plot had been tossed out and something new done with the same general premise and characterization, it could have been a real gem.

Also, the Atlantis continuity reference doesn't feel like Siegel, does it? I wouldn't be surprised if it was dictated by Weisinger, anticipating that if proper acknowledgement wasn't paid to both versions of Atlantis seen in the pages of Adventure, questions would be raised in the letters page. (The fact that Mort created Aquaman may also have been a factor.)

オテモヤン said...
This comment has been removed by a blog administrator.
9:15 PM

One correction - this story was finally reprinted just last month, in the Superboy - Greatest Team-ups Ever Told softcover!