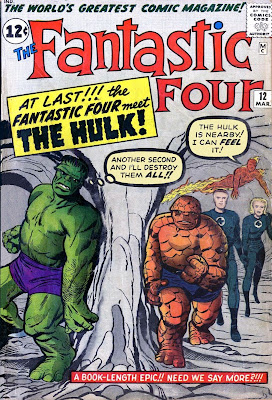 One of the keys to Marvel's success in the Silver Age was the relentless use of crossover stories to introduce the readers of one Marvel mag to characters in other titles. This story marks the very beginning of that trend.

Ben and Alicia are leaving a performance at the symphony, when Ben's appearance attracts the attention of some soldiers, who suspect he's the Hulk: 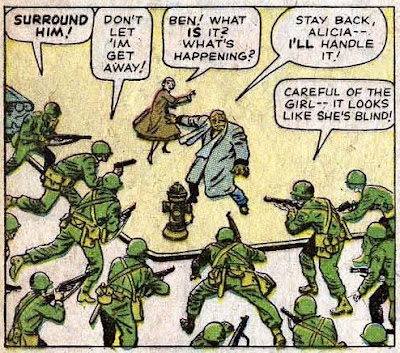 After the confusion is resolved, Ben learns that Thunderbolt Ross (the Hulk's nemesis) is requesting the aid of the FF to capture old Greenskin. There's a cute little sight gag: 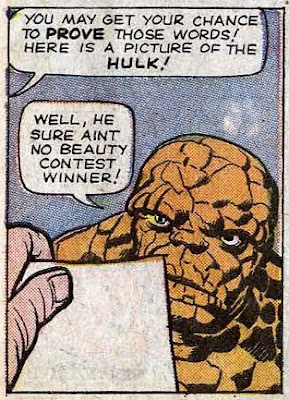 After the boys brag about how they'd defeat the Hulk, we get another taste of Sue's inferiority complex: 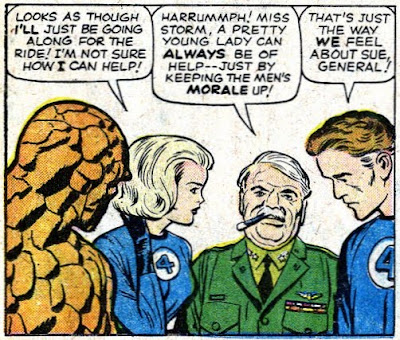 The Hulk is suspected of destroying a secret project in the Southwest. But Bruce Banner believes that the actual culprit is the Wrecker. It turns out that the secret project was an early version of "Star Wars"; a plan to safeguard cities from nuclear attack: Banner's assistant, Karl Kort, drops his wallet, which conveniently contains a membership card in a "subversive communist front organization". Thus the Wrecker's identity is revealed to Rick Jones. Before he can tell the others, Kort kidnaps him. He leaves a note for Banner telling him to get rid of the FF or he'll never see Rick alive again. So Bruce decides to turn himself into the Hulk again. Remember, this is during the era where Stan and Jack were still experimenting with the Hulk's transformations; at one point it was voluntary, at another it was brought on by nightfall. It was only later that they hit on the idea that stress caused Banner to change.

A little later all three groups are in an underground cave. The first meeting of the FF and the Hulk: 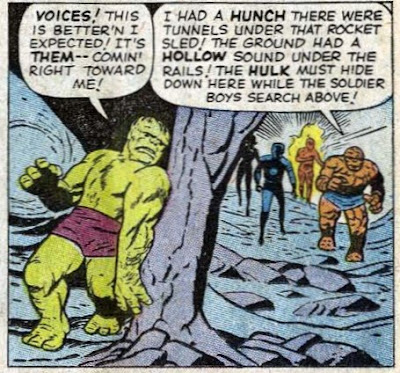 Note as well that the Hulk's vocabulary is a little more extensive than the "Hulk smash!" character of the later 1960s.

There are several pages of the FF mixing it up with the Hulk, when suddenly a beam weapon incapacitates the behemoth. The Thing, angry that his battle was cut short, discovers the culprit: a giant robot controlled by the Wrecker. He makes short work of the robot and the team confronts Karl Kort, who has one last card to play: 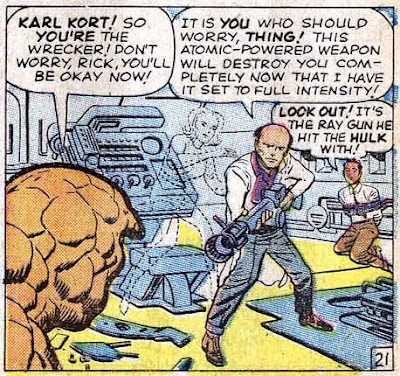 But as you can probably guess from that panel, Sue proves useful for more than just morale-boosting. The Hulk gets away.

Comments: Obviously a hugely significant issue in terms of a preview of things to come in the Marvel line. One oddity; the crossover came too late to save the Hulk's own magazine, which saw its final issue come out that same month (March 1963). Incidentally, there was another FF crossover in Amazing Spiderman #1, which also had a 3/63 cover date.

Colin Smith said...
This comment has been removed by the author.
5:24 AM

Colin Smith said...
This comment has been removed by the author.
6:32 AM

Thank you for nudging my memory with this, and apologies for managing to fill up your comments with two deleted notices. I'm thoroughly embarrassed to have done that.

I can't help but feel that it was so much more fun when the crossovers were much rarer. I enjoyed all the nods and hints to a "Marvel universe", such as Thor flying past an unacknowledged and annoyed Spider-Man, or even the appearance of the X-men briefly in the shadows in a Magneto v Thor story, far more than the constant, or as you rightly say 'relentless', mega-crossovers. It meant that crossovers felt special, and left space for the reader to fill in some of the details of the big picture for themselves. But then, might as well bemoan MP3s replacing vinyl. (And MP3s have their virtues too ...)

One of my favs from way back when. You forget how excited kids got when this kind of comic came out; we were in 7th heaven..Lee, Kirby , Ayers, Hulk and FF almost too much!