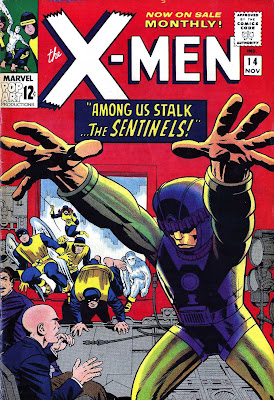 The long-running antagonists for the X-Men debuted in X-Men #14. An anthropologist named Dr Trask warns mankind that the mutants are among us and that they are a severe danger to mankind: 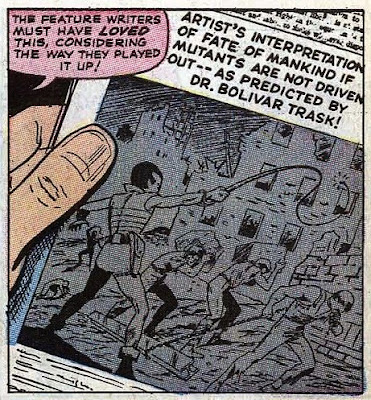 For starters, it seems unlikely that an anthropologist would be issuing this warning; anthropologists study other cultures and attempt to do so without making judgments about right and wrong (not always successfully, mind you). And later events in the story make the idea that Trask is an anthropologist very unlikely. For example, after Professor X demands a TV debate with Trask, the latter brings out his sentinels: 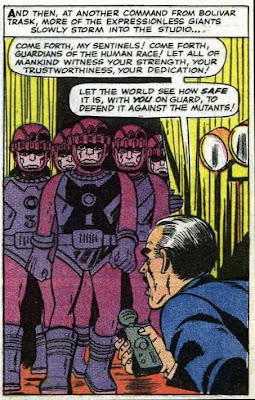 Okay, so now we've got an anthropologist who's skilled at making robots? Then again, maybe he's not all that skilled, for the Sentinels quickly turn against him: 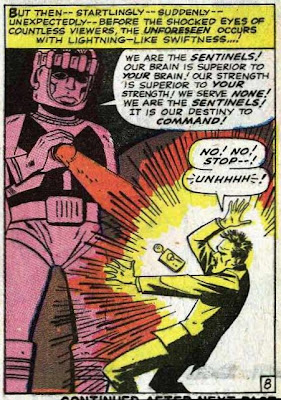 This is possibly the biggest cliche of the Silver Age: robots and computers were constantly rebelling against their masters. Indeed, the series Magnus, Robot Fighter which I have discussed several times recently, is based on that premise. But there are many, many other examples, like Computo rebelling against Brainiac 5, or Wonder Man (one of Superman's robots) who briefly replaced Superman.

It also ties into one of the odder conundrums of the Silver Age. While there was enormous respect for "science", the writers were considerably more suspicious of technology (i.e., applied science). To a certain extent, this may be due to the shoddy workmanship of electronic devices of the time.

The X-Men race to the TV studio in response to a mental summons from Professor X. Most of the Sentinels leave with Trask, but one remains behind. The X-Men have a minor battle with it, when it inexplicably keels over: 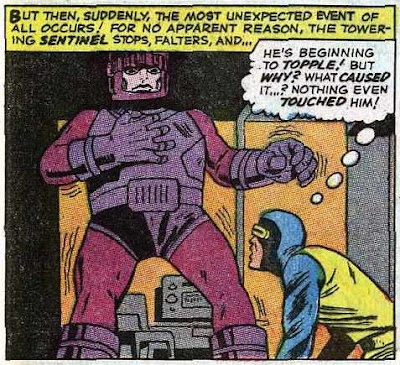 Professor X hears the robot say something about a "Master Mold" before it collapses. He is also able to get an impression of the HQ of the Sentinels. The team heads there, but they get split up and the Sentinels start catching them: 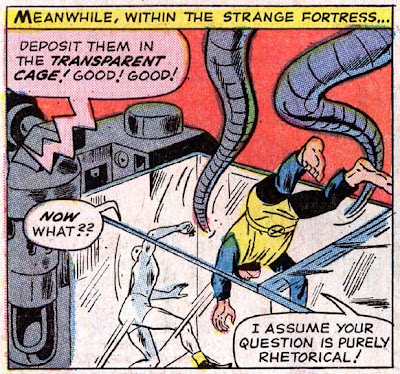 Trask, now a prisoner of the Sentinels himself, learns of the real mission of the X-Men: This story also tells us the origin of the Beast, aka Hank McCoy. His father worked at an "atomic project", as an ordinary laborer, which of course raises the question where Hank got his prodigious loquacity (of course, in the real world, he got it from Kirby's earlier "Big Words" character, who got it from "Johnny" in the Doc Savage series, who probably picked it up from somewhere else). Hank discovered that he had extraordinary agility, which he put to good use on the gridiron: 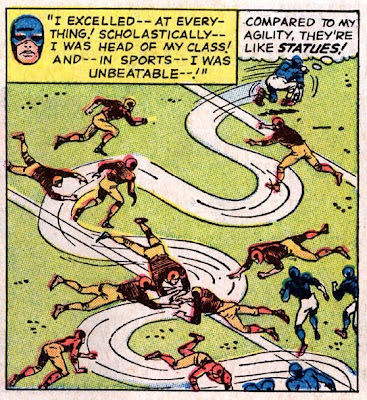 His extraordinary feats brought him to the attention of Professor X, who invited him to join the X-Men.

In the finale (X-Men #16), the team escapes from the prison where the Sentinels were holding them, and using teamwork are able to hold them off briefly. Meanwhile, Professor X has determined what stopped the original Sentinel in the TV studio; it was a crystal which interfered with the transmission signals from the Master Mold to the Sentinels. Professor X has the crystal flown to the Sentinel's headquarters. At the same time, the Master Mold is forcing Trask to create more Sentinels: 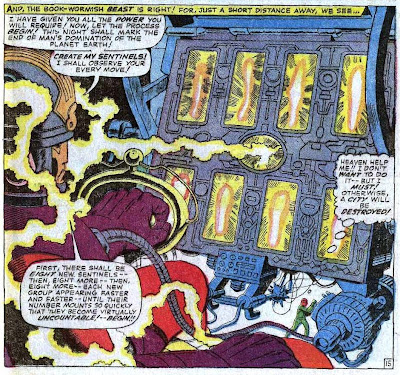 But at the last moment, Trask rebels: 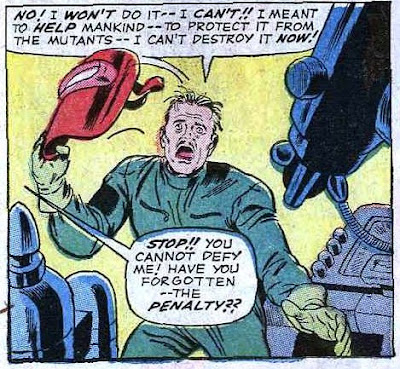 Trask destroys the Master Mold and is killed in the process. The X-Men manage to escape the Sentinel's HQ via some solid teamwork.

Comments: A terrific and exciting tale with lots of excellent characterization. If the entire X-Men run had been as solid as this one, it would not have been canceled before the end of the Silver Age.

The stories described in this post have been reprinted here:

Scientists in Silver Age comic books were often "generalists." I think this was a reflection of what you described as the "enormous respect" that many Silver Age writers had for science. Hank Pym was an entomologist who invented a shrinking gas and a cybernetic helmet on the side. Over at DC, Professor Ira West (Barry Allen's absent-minded father-in-law) was a theoretical physicist who invented a rocket fuel, a supercomputer, an advanced telescope, and a ray that enlarged fruits and vegetables. Reed Richards is probably the outstanding example of the omni-competent scientist, but Dr. Trask stands in that company too.

The theme of robots rebelling against their human creators wasn't confined to the comic books of the period. It can be found in many science fiction stories, movies, and television shows as well, and you can trace it back to Karel Capek's play R.U.R. and Ambrose Bierce's story "Moxon's Master" (among many other literary works).

Hey, if we can have a real-life "evil psychiatrist" like Dr Wertham, then why not a fictional "evil anthropologist." Here in the 21st Century, where Orwellian euphemisms are the norm, I guess I'm not that surprised to see "Anthropologist" and "Xenophobe" treated interchangeably.

As for the seeming conflict between a respect for science and a fear of it in the SA, remember that even though the general feeling of the age was pro-science, comics were often created by old guys, who typically view new technology with a wary eye (and in this case, guys who were veteran creators, in the 50s, of tales of science gone horribly wrong). Also the same decade that gave us transistors, lasers and moonshots was also overshadowed by the threat of the H-Bomb and Soviet spy satellites, so I imagine most people had a love/hate relationship with scientists in general.

Cool story that lays the groundwork for what would become a central theme in the X-universe in later years.

I've always wondered why DC had fewer major brain characters than Marvel. The biggest, smartest, make time machines out of toasters scientist was Lex Luthor. A villain. Off the cuff, I'd say most of the inventors and scientists of note in the DC Silver Age were madmen who provoked the sad comment "If only they had used their genius for good."

For A-List heroes, you've got Ray Palmer, and to stretch a point, Barry Allen, forensic technician-scientist. In the "B-List" we'd have Prof. Haley and Dr. Magnus. Sure, the rest of the heroes were dammed sharp (ie: Batman), but none of them put "Scientist" on their business cards.

Over in the Marvel Universe, we're hip-deep in scientists on both sides of the morality coin. I shan't even bother listing them all.

I wonder if DC felt that their readership was just too young to fully appreciate, understand or desire technobabble spouting brain heroes?

Ah, but Blaze, you are forgetting the biggest scientist of them all, Jor-El, who also probably qualifies as a major brain.

Niles Calder, "The Chief" was another DC super-genius and expert in any field that even sounded vaguely like science.

It could be that "super-smart" just isn't a very exciting premise for a hero in the "spandex and cape" sense. I mean I like Reed Richards well enough, but the guy's as dull as dishwater next to just about any other Marvel character and a good deal of DC's. If there's anything more tedious than a guy who's physically omnipotent, it's one who's mentally so.