Over at Silver Age Gold, there's a post on what a bee-yatch Iris West (later Iris Allen) could be. As I mentioned in the comments, that's true on one level. But if you look at it from the writer's viewpoint, she's a perfect comedic foil for Barry. She thinks he's the slowest man on Earth, while we know (from the cover) that he's secretly the fastest man alive. I noted that this gave the writer a nice little ending for his story.

How common was this ending? I was surprised when I looked.

In Flash #105 the first story is Conqueror from 8 Million BC; here's the ending panel: 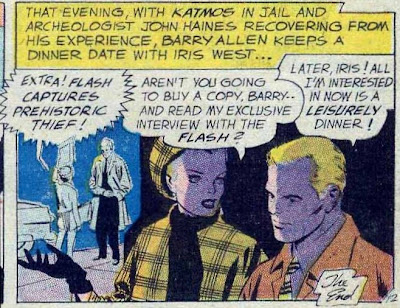 The second story is the Master of Mirrors. It too features an Iris finale: 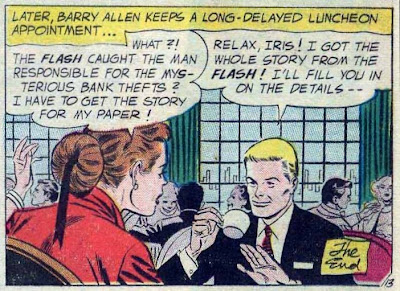 In Flash #110, Barry screws up and the Flash arrives for a date with Iris: 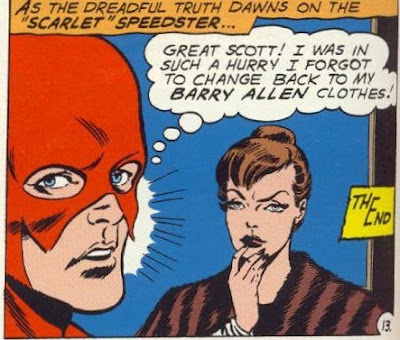 The second story is the first Kid Flash tale, but it too has an Iris ending.

The ending to Flash #111's opening tale has Barry getting a rival for Iris' affections:

More on Dr. Summers later. The second story in this issue is a solo Kid Flash tale, so Iris is not featured at all.

Flash #112 has the introduction of the Elongated Man, and ends with the Ductile Detective and the fastest man alive at a banquet, shaking hands as only superheroes can do:

But in fact the panel before shows her introducing the two heroes to the attendees at the banquet. The second story again doesn't count as it stars Kid Flash.

Flash #113 has two stories, both ending with Iris. Here's the first:

And in the second, Barry reclaims his woman from the wiles of Dr Summers: 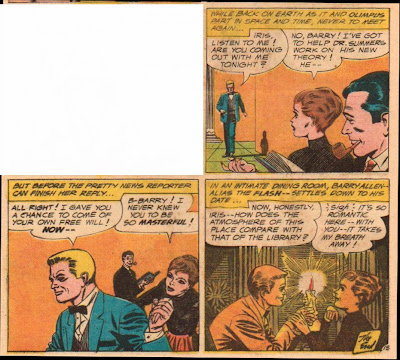 In Flash #114 Captain Cold gets the, err, hots for Iris, but the first story ends with her and Barry, and the second is another Kid Flash tale.

So putting it all together, in the first 10 issues of Flash, there were 20 stories. Three of those were Kid Flash solo tales and therefore I'll deduct those from the total leaving 17. Fifteen of those stories, or 88% of the total, ended with Iris. And it's not like it stopped, from 115-120 Iris only missed the denouement of one Flash solo story.

So it appears obvious that Julius Schwartz and John Broome approached Iris as essentially a character who told us the story was over. That's not to say that she didn't have some significant scenes early in comics, but in a lot of cases that was to establish the basis for the final conversation between Barry and Iris.

How does that compare with some of the other DC girlfriends? I'll try to take a look at it in the near future.

Update: I meant to mention as well that closing a story with a domestic scene like those is a very common practice. For example, every episode of Welcome Back, Kotter, would end with Kotter telling his wife a joke about one of his uncles, just as every episode of Hill Street Blues would conclude with Daniel J. Travanti and Veronica Hamel sharing a quiet moment together.
Posted by Pat at 3:52 AM

Pat: Nice work! Thanks for taking the time to break that down for us. I don't think I could've handled that much Iris !

Good point about Iris as the bookend. Reading the Showcase volumes told me three things:
1. Barry & Iris ate out constantly.
2. Iris hated her job.
3. Iris was a much bigger pain-in-the-neck than Jean Loring.

That panel of Barry shaking hands with the Elongated Man raises the question -- How many banquets does the Flash attend in the course of a season? Given his metabolism, and how often he takes Iris to a restaurant, I suppose a free meal would be hard to turn down.

Heheh, good point anonymous, although the Barry Allen Flash never had the metabolism problems that Wally West did in the 1980s.

I had no idea Barry Allen was so romantic!