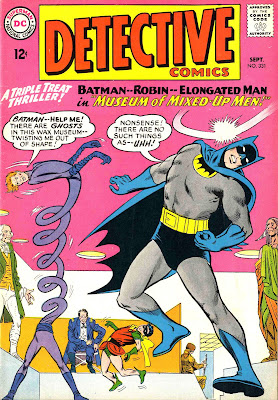 For its first 330 issues, Detective Comics had always published multiple stories, but this issue provides a book-length tale combining the two features that the mag was publishing at the time: Batman and the Elongated Man. It's the fifth issue into the New Look, and the interior (and cover) artwork is by Carmine Infantino, while the story is by Gardner Fox.

As the story begins, Bruce Wayne is visiting a wax museum dedicated to American history, that was funded by the Alfred Foundation (see ending for a discussion of the Alfred Foundation). But when he poses for a picture at the Matthew Brady exhibit something odd happens: 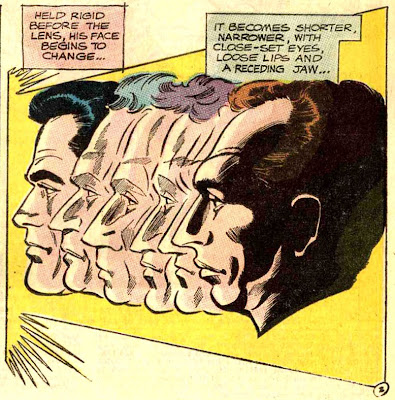 Yet another reminder that Julius Schwartz didn't get rid of all the science fiction elements of the Jack Schiff years. Bruce has temporary amnesia, and around the same time as he's stumbling around the city in a daze: 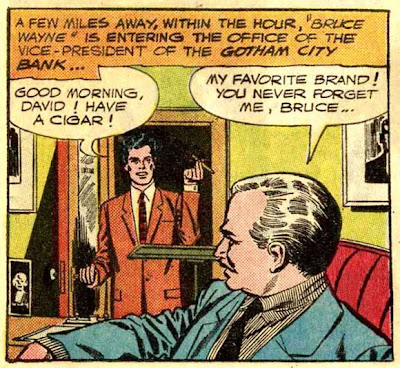 As you can probably guess, it's a phony Bruce Wayne, who's well-prepared and cons the bank VP into letting him withdraw $500,000 from his account.

Later that night, Robin is forced to battle some jewel robbers on his own. But fortunately for him, Batman recovers his memory and helps out. Now they have to figure out what happened during his amnesia. Robin tells him about the withdrawal from the bank (apparently the bank officer was a little casual about Bruce's privacy).

Meanwhile, Ralph and Sue Dibny have arrived in Gotham and visited the wax museum themselves. Ralph gets curious when he notices a few pictures that his wife took: 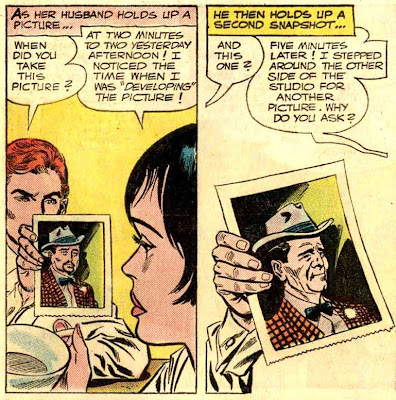 Realizing that the man's face had changed dramatically, Ralph smells a mystery. As it happens, about the same time Bruce and Dick have visited the bank, where it turns out that the man in the photograph has been robbed in a similar fashion to Bruce. When they learn that before being robbed he had visited the Matthew Brady exhibit at the wax museum, they change into their fighting togs and head there, meeting up with the Elongated Man inside. The three are attacked by invisible enemies, as shown on the cover. When Batman makes it to the Brady exhibit: 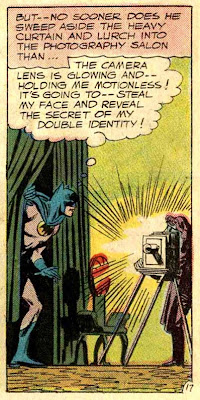 We learn a bit about the "science" involved here from the crook, Boss Baron: 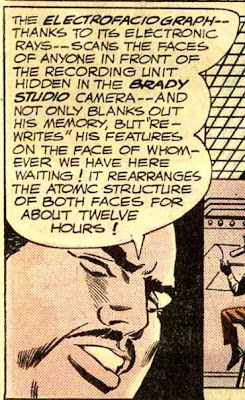 Fortunately, the Elongated Man sticks his face in front of the camera to protect Batman's secret identity. This works, but at the cost of Ralph losing his memory temporarily. Batman and Robin start wiping up the crooks with a little sluggish help from the Ductile Detective: 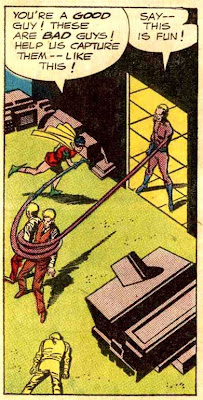 And in the end, Batman shares a secret with the Elongated Man: 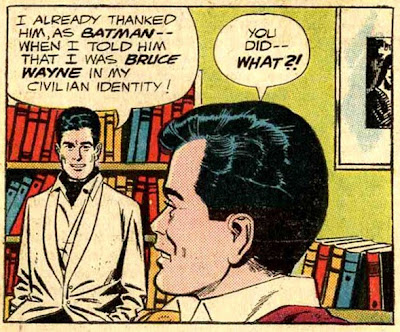 But it's okay, because Ralph will lose his memory of Batman's secret identity when the face-change wears off.

Comments: An interesting and fast-paced story. I confess, however, that the plot device of the face-changing machine (electrofaciograph) seems rather far-fetched.

Postscript: The Alfred Foundation was a charity that Bruce Wayne set up in the aftermath of Alfred's (apparent) death in Detective #328. After he was brought back to life (discussed here), Bruce changed the name of the charity to the Wayne Foundation.
Posted by Pat at 4:13 PM

But who were those "invisible assailants"?

Pat: In the "should have been done sooner" department, I have you linked up at my new blog: http://www.kingdomkane.com/

Jim, making the electrofaciograph even more improbable, it was some rays from the machine.

The obvious advantage to having multiple stories is that maybe at least one of them is a good story.

Definitely a Gardner Fox story. The "electrofaciograph" is the sort of thing you'd expect to find in one of his Justice League stories.

This also looks like one of those times when Julius Schwartz came up with an idea for a cover and told the writer to come up with a story to go along with it. The "ghosts" are clearly extraneous to the main plot, yet Fox had to figure out some way to put them into his script.