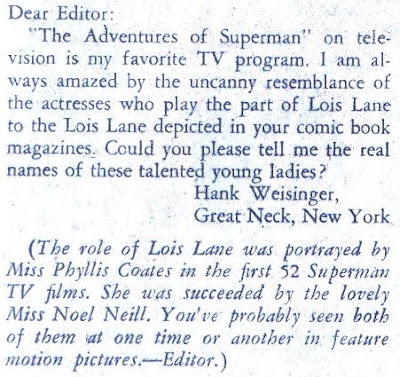 Hank Weisinger? I'm guessing it's Mort's son, because Mort himself was from Great Neck, as mentioned here:

For many years before and five years after that globe was constructed, Mort Weisinger drove from Great Neck towards that incredible city of towers and terrors, his mind filled not with the grandeur of the metropolis before him, but with the problems of plot... how could he get an almost invulnerable character into and out of dangerous situations this month?

Update: Two terrific comments on this post. CMN points out that Phyllis Coates only appeared in the first 26 episodes, not 52 as stated by Weisinger Pere. And an anonymous commenter points out that Weisinger's son, Hendrie (Hank), wrote a comment on a blog post here where he states:

Also, many of the letters in the mailbags he made up, many times signing my friend's names. He would often do this to plant ideas and to develop the superman mythology.

Incidentally, that blog post goes into some detail about Weisinger's difficult nature (he apparently browbeat his writers and artists), and while I don't disagree about that, I do disagree with this:

But Weisinger had very little talent -- less, say, than a writer coming up with a funny dream sequence for The Dick Van Dyke Show. The Weisinger neuroses poke thru the stories like broken bones thru skin. God, are they painful. There's no aesthetic payoff, just the fascination of the awful. But, okay, I'll settle for that.

So too I think it is with the writer's assessment of Weisinger's talent. It can be difficult to see as an adult in 2010. Yes, if you've read Watchmen or DKR, those 1960s Superman tales seem banal and juvenile by comparison. But that's the point, we hadn't read Watchmen back in the 1960s, and we were juvenile.
Posted by Pat at 3:35 AM

By the way, Phyllis appeared in the first 26 not 52 episodes. You think Mort would know.

According to wikipedia, Mort had 2 children, a daughter and a son called... Hendrie, who is now a highly respected author and speaker on aspects of psychology.

I assume that his parents called him by the diminutive Hank, since a thread Dr. Weisinger started on one of the Comic Book Resources forums is entitled "hank is here!"

On that same thread Dr. W gives the url of his website as www.drhankw.com

In a comments post to a fascinating discussion about the personality of Mort Weisinger, Hank/Hendrie made the following observation: "Also, many of the letters in the mailbags he made up, many times signing my friend's names. He would often do this to plant ideas and to develop the superman mythology."

That fascinating thread can be found here:
http://hoodedutilitarian.blogspot.com/2009/03/letter-to-believer-about-mort-weisinger.html

Many thanks for a consistently entertaining and fascinating blog.

Anonymous said...
This comment has been removed by a blog administrator.
12:42 AM