Classic Stories of the 1960s: Super-Menace

A friend of mine suggested I review this terrific story from Superman #137 (May 1960): 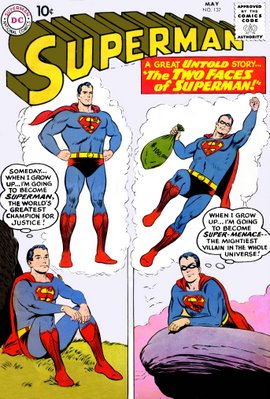 It starts with a brief retelling of Superman's origin, with one striking new detail: The rocket which Superman came to Earth in had hit an alien space ship which bathed the rocket in a duplicator ray. The second rocket also landed on Earth, but this time near the hideout of a gangster and his moll. At first they worry that the super-infant inside has been sent by their enemies to kill them, but then they discover that he's actually friendly. They decide to pretend to love the boy, whom they dub Super-Brat so that when he grows up, he will help them with crime.

In the second act, both Superboy and his doppelganger, now referred to as Super-Bully, are teenagers. Super-Bully despises Superboy, and dreams of defeating him. This seems quite possible when he discovers that unlike the real Kal-El, he's immune to Kryptonite. In a bit of irony, Super-Bully actually helps out Clark. While Superboy is busy, he changes into Clark's clothes and visits Lana Lang, who tries out some Kryptonite to find out if Superboy is secretly her neighbor. Super-Bully also tries imitating his rival with Krypto, but this turns out badly as the super-dog recognizes that this is not his master.

The final sequence tells us about Super-Menace's adulthood. His crime boss father wants him to go kill Superman, knowing that this will result in his daddy becoming the leader of the crime syndicate. But the gangster mistakenly admits that he never really loved Super-Menace, and the latter overhears this.

The battle between Superman and Super-Menace initially starts out pretty even, but of course with the latter's invulnerability to Kryptonite, it isn't long before he brings down some meteors of Green K. They both discover that Super-Menace is actually a "force manifestation" and not really alive.

But as he watches his enemy dying, he wonders if the mobster and his moll never really loved him, perhaps the other things he was taught by them were untrue as well. He saves Superman, then rushes off to confront the couple who raised him. He converts himself into pure energy, ending his life as well as theirs.

Comments: A terrific story with many entertaining features. For example, this was a precursor to the Reverse Flash; a character exactly like a hero but evil. In addition, the sad ending echoes Frankenstein in some ways (the movie, of course, not the book). It also includes a brief retelling of Superman's origin.
Posted by Pat at 9:07 PM