In the early 1960s, the World War II generation began to come into power. This was reflected in both politics, where Navy veteran John F. Kennedy was elected to the White House over fellow Navy vet Richard Nixon, and in pop culture, where the theatres were filled with WWII features like The Longest Day, The Great Escape and The Guns of Navarone. On TV, there was Combat, the Rat Patrol and McHale's Navy.

So it's not surprising that as Marvel was casting about for new ways to wrest 12 cents out of the nation's youth, that they hit upon the idea of Sgt. Fury and His Howling Commandos. As is de rigeur in such series, there is an ensemble cast: 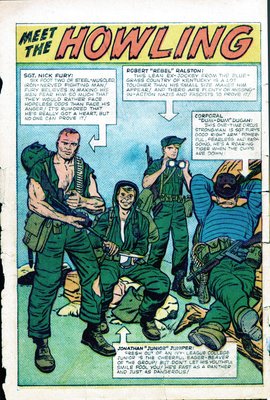 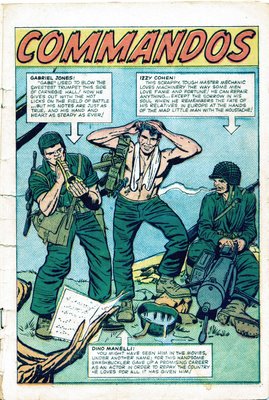 This was a tradition dating back to the Boy Commandos (also co-created by Jack Kirby) and Blackhawk, and movies like Destination Tokyo. But this group was a little more integrated than most. Although it isn't obvious in the portrait above, Gabe Jones was a black man, and Izzy Cohen the first explicitly Jewish heroic character that I can remember in comics.

The Howlin' Commandos typically get the suicide mission assignments with big stakes. In SFAHHC #1, they have to rescue the resistance leader who knows the planned date of D-Day, while in #2 they are assigned the task of destroying Hitler's attempt at an atomic bomb. By the standards of the time, these were incredibly violent comics, although Kirby avoided the gore with some clever tricks: 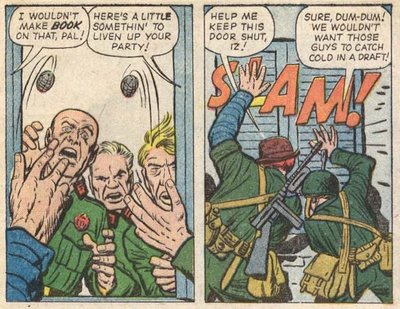 There are many memorable moments in the first few issues, such as when the Howlers intentionally get themselves imprisoned in a concentration camp: 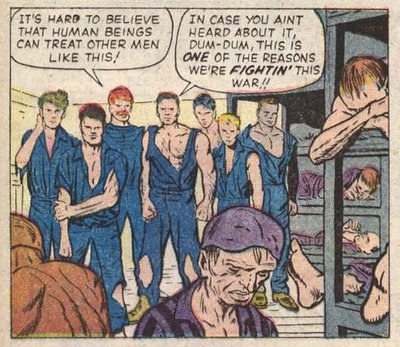 As always with Marvel, there were frequent crossovers. For example Reed Richards appears as a young major in #3, while Baron Zemo, Captain America's nemesis, pops up in #8. Cap and Bucky themselves fight side by side with the Howlers in #13.

As with most war comics, the bullets hit all around the Howlers but seldom were stopped by them. However in Sgt. Fury #4, that changed suddenly: 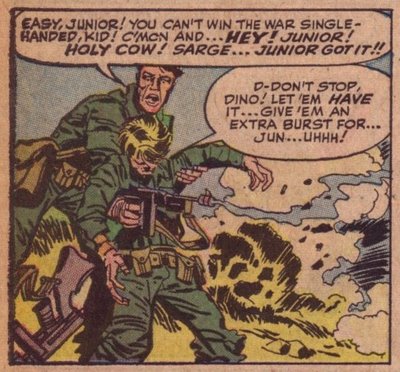 We have already discussed how Sgt. Fury #6 tackled the subject of racism. In retrospect, it is obvious that Stan was using the backdrop of World War II to talk about issues that were on the front burner in 1964.

Of course, another issue that was moving to the front burner that year would eventually doom the war comics: Vietnam. For the times, they were a-changing.
Posted by Pat at 2:38 AM