I've talked briefly about Thor in the past, but now it's time to discuss him in a little greater detail. Thor is the Norse god of thunder. His initial appearance in Marvel was in Journey Into Mystery #83. JIM was one of Marvel's horrible "horror" mags, which featured stories like "I Unleashed SHAGG Upon the World!" and "I Found RRO... The Thing from the Bottomless Pit!"

Don Blake, a lame physician, was on vacation in Norway when he discovers a plot by alien invaders from Saturn. He is spotted by the Stone Men, and runs into a cave. There he discovers a small staff, which is fortunate because he has lost his cane. But when he strikes the cane against a boulder blocking his way, he transforms suddenly into the Mighty Thor! 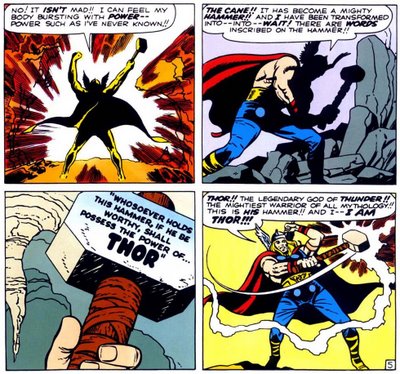 Thor has many powers. He is virtually invulnerable and fantastically strong. But even more important is his mighty hammer (the staff transformed), which makes it possible for him to fly and which destroys almost anything it's thrown against and returns automatically to his hand like a boomerang. It can also cause lighting and storms.

But of course with this power comes a weakness. If the hammer leaves Thor's hand for 60 seconds, he reverts to Don Blake, the lame physician. As always in the Marvel universe, there is also a love interest. Nurse Jane Foster secretly loves Dr Blake, and he adores her but worries that she could never love a weakling like him.

Initially Thor battles fairly traditional enemies for superheroes: Aliens intent on a hostile takeover, communist dictators and assorted crooks. But quickly a supervillain worthy of Thor's interest was discovered; his evil brother, Loki, the God of Mischief. Loki first appeared in JIM #85, and was returned quite often in the early issues: He is featured in JIM #88, 91, 92 and 94 as well as Avengers #1.

The characterization of Nurse Jane Foster in these early issues stinks. She's the typical 1960s Marvel eye-candy airhead. We see her thinking about how much she loves Don Blake, but she has an eye for Thor (not realizing that they are actually one and the same). And the first time Loki shows up, he's quite a prize as well: 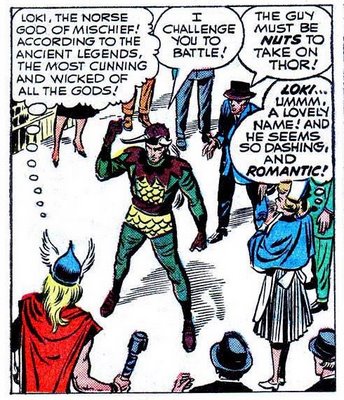 This is all too typical of Marvel at the time. Girlfriends/love interests existed mostly as potential hostages for villains and were generally placed in traditional women's occupations: nurses like Jane Foster and secretaries like Karen Page, Betty Brant. Compare that with DC, which had Lois Lane as a reporter, Vicki Vale as a news photographer, Jean Loring a young attorney and Carol Ferris running an aircraft factory.
Posted by Pat at 8:48 PM