As we have discussed in the past, if there was a religion in the DC Universe back in the Silver Age, it was science. In a way, this is probably a natural outgrowth of the postwar era, as it seemed that technology, government and industry were forging ahead to move us into the glorious future. But it looks just a tad creepy with the benefit of hindsight.

For example, consider this bit from Flash #153, the June 1965 issue. Professor Zoom, aka the Reverse Flash, aka Eobard Thawne has apparently reformed thanks to the "electro-reeducation" provided by prison authorities in the year 2465: 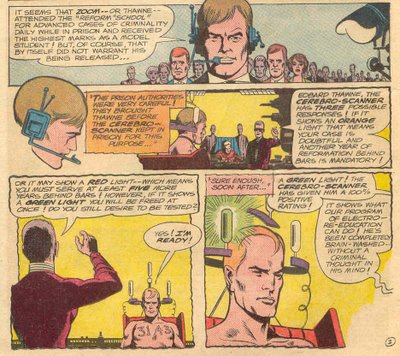 Of course as often happens in these stories, there is something wrong with the machine. In fact, Professor Zoom has tampered with the Cerebro-Scanner to make sure that he will pass the test despite not having gone straight at all. As was the case in Superman #132, once the machine is repaired, nobody stops to think, hey, maybe we shouldn't be setting murderous crooks free just on the basis of them passing a test.
Posted by Pat at 7:52 PM