Getting Smaller, Getting Bigger

Following the Fantastic Four, the next super-powered hero to appear in the pages of a Marvel comic was the Ant-Man (technically, anyway). Hank Pym was introduced in Tales to Astonish # 27, January 1962, in a short story entitled The Man in the Ant-Hill.

Hank is a scientist interested in pursuing his own line of study. He creates a pair of serums that will shrink and later expand objects. He decides to test it on himself, but unfortunately he forgets that he will be too far away from antidote to expand back to normal. The ants are after him, but he manages to elude them with the aid of one friendly ant. Eventually he makes his way back to the serum that restores him to normal size. He decides that the method is too risky, and throws away the twin potions.

But in Tales to Astonish, #35, Hank returns, this time in full superhero garb and with additional powers: he has learned how to communicate with the ants. 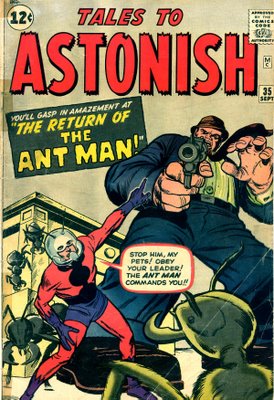 At first, Ant-Man changes sizes by pouring liquid on himself from a test-tube. In TTA #36, this changed to a gas that he could inhale; later still it became just a matter of swallowing a pill.

In TTA #44, things changed dramatically for Ant-Man. He had been thinking that he needed help in his fight against crime, an assistant to take some of the load off his shoulders. In a flashback, we learn that Hank had been married to a woman named Maria, whose father had defected from Hungary. She wants them to visit her homeland for their honeymoon, but when they arrive the commie rats kidnap and kill her. In a way, she had led to Hank becoming the Ant-Man, by telling him jokingly that he should "go to the ants".

Back in the present, Hank meets a fellow scientist and his attractive but young daughter, Janet Van Dyne. She reminds him of his wife, but he insists she's too young for him. Meanwhile, she's thinking that she doesn't want a scientist, she wants a man of action.

When her father is murdered, she turns to Hank Pym. However, the Ant-Man answers her summons. She expresses a desire for revenge and Hank wonders if she might be the one he's been looking for. Yep: 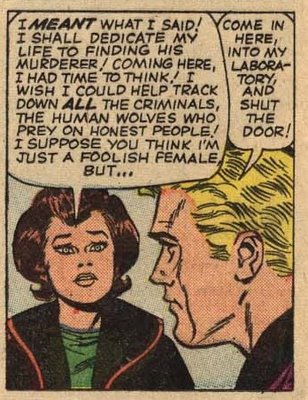 He discloses his secret identity to her and outfits her with a small pair of wings and antennae that only appear when she shrinks down to tiny size. However he maintains a strictly business attitude towards her, not wanting to be hurt again with the loss of a lover. But in the end, we see she is determined to win his heart.

Comments: I confess I did not remember these stories having the charm and entertainment value that they did.
Posted by Pat at 4:13 PM