The Inside Scoop on the Outsider

In the early 1960s, sales of the Batman magazines started to falter. It's not surprising; Batman was at an all-time low in terms of quality of stories and art. DC decided to restaff the editor's desk, putting Julius Schwartz in charge effective with the May 1964 issues of Batman and Detective.

The announced move is here: 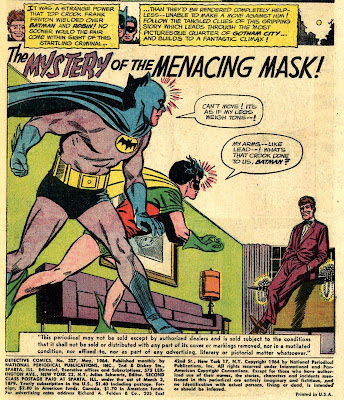 It's that little yellow circle around the bat on Batman's chest. This was intended to mark a turning point.

Most of Schwartz's other changes were unannounced, but became apparent over time. Many characters who had been around for years, like Batwoman, Batgirl (Betty Kane), Bat-Mite and Ace the Bathound disappeared suddenly. The three aspects of the early 1960s Batman that sucked the most, the aliens, weird transformations, and monsters, also disappeared.

But one person could not pass from the Batman scene without comment. And in the letters column of Detective #327 Schwartz tried to head off the complaints at the pass:

Detective #328 was indeed controversial. Alfred the butler (nobody back then knew he'd been given the last name Beagle) had been around since Batman #16 (Apr-May 1943). Originally conceived as a comedic foil for Batman and Robin, he very quickly became another serious member of the Batman cast. In the early stories he aspired to be a detective himself, but that aspect of his character had been gone for almost 20 years when he appeared in Detective #328's Gotham Gang Line-Up! With Batman and Robin out of town, Alfred is forced into action: 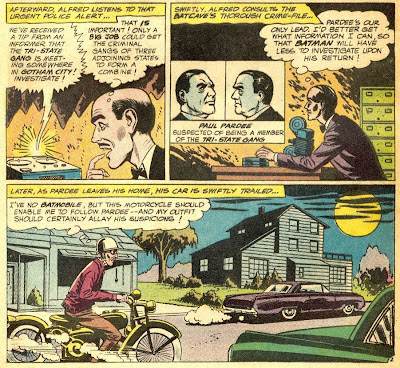 Batman and Robin return to find Alfred gone. Chasing the same leads he had, they fall into a trap. They learn that Alfred has also been captured by the gang, as criminals vie for the right to kill them. But Batman and Robin manage to escape quite cunningly, as does their faithful butler: 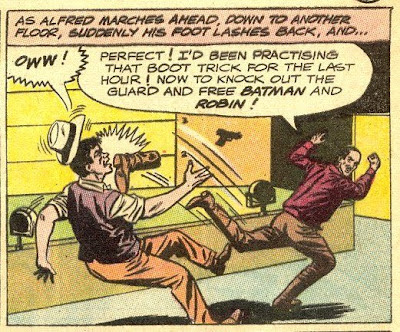 They meet up next at a construction site: 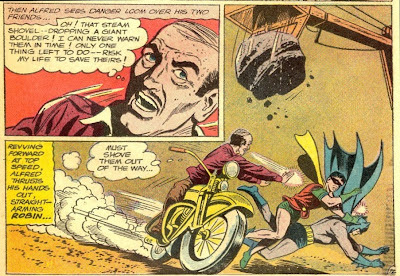 Tragically, the boulder goes on to crush Alfred. This was a stunning moment in DC history. True, they had already killed off Lightning Lad, but he was a relatively recent addition to the DC universe. This was a well-established backup character, who had appeared in many stories over the years. It was a stunning move, and I'm sure had to be approved by top DC brass.

The same issue featured the introduction of a new character to the Batman family: 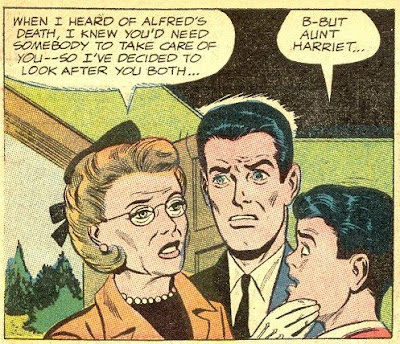 Aunt Harriet is reported to have been added to the series to quell the persistent rumors that Bruce and Dick were gay by providing them with an added opposite sex chaperone, related to the youngster. And of course it added plot possibilities with the pair suddenly unable to burst into action at the drop of a hat. Aunt Harriet became (to a lesser degree of course) kind of like the Lois Lane to Superman or Lana Lang to Superboy, a pest about his secret identity. This was unlike the Aunt Harriet of the TV show who was too dimwitted to ever guess that Bruce and Dick were the Dynamic Duo.

A couple of issues passed before the letters reacting to Alfred's death appeared. 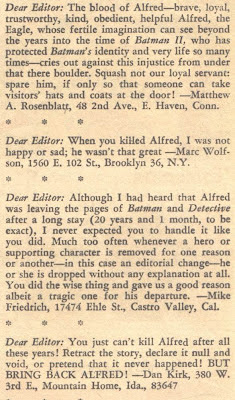 Well, not to spoil the story or anything, but Dan Kirk got his wish.

In Detective #334, the first story featuring the Outsider appeared. Batman discovers his possessions being ripped off by The Man Who Stole from Batman:

The thief is apparently the Grasshopper, shown in the panel above. But at the end of the story, after Batman captures him, it is revealed that he worked for another: 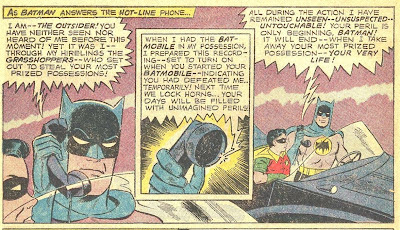 In Detective #336, Batman must face a witch with extraordinary magical powers. But once again she turns out not to be the real villain: 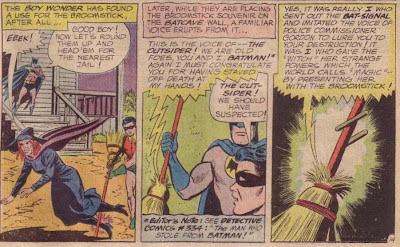 In Detective #340, we got our first look at the Outsider, albeit reflected poorly: 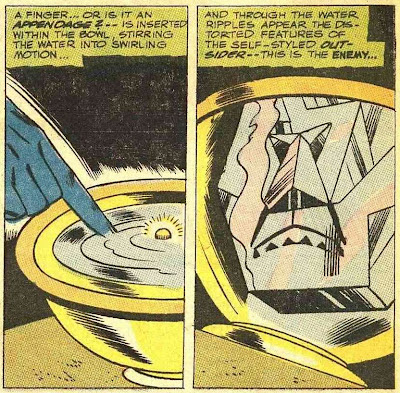 As we learned more about his abilities, they seemed clearly "magical". I mean, how else do you explain: 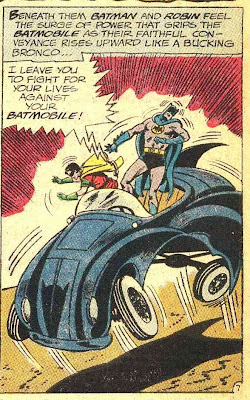 He turned the Batmobile into a bucking bronco? I rest my case. But what are we to make of this? 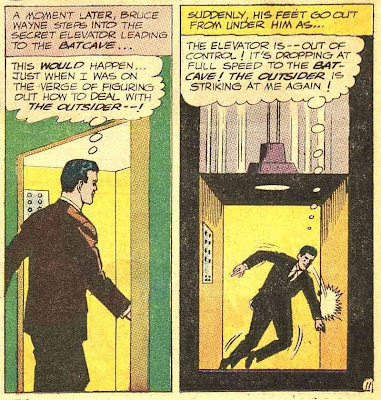 If he's tampering with the Batcave elevator, doesn't that indicate he knows Bruce Wayne is Batman?

The next clue came in the Letters Page of Detective 344: 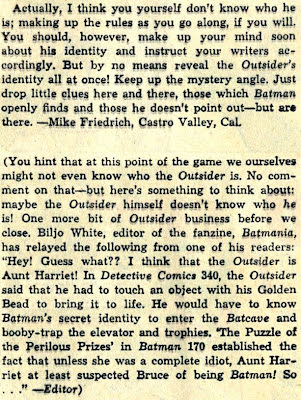 I don't know how long DC intended to keep up this serial, but events quickly forced their hand. In January 1966, the Batman TV series debuted. The show was a colossal hit, instantly sending sales of Detective and Batman through the roof. But there was one major problem. The TV show included both Aunt Harriet and Alfred the Butler.

The irony is incredible. When Alfred was first introduced in 1943, he was portly. However, in the Batman movie serial, a thin man portrayed him, and so Alfred was slimmed down (the explanation in the comics was that he decided he couldn't be a detective if he was that fat). Now another media adaptation was forcing the return of Alfred, although I have no doubt (given the clues that had been left in the earlier stories) that the intent was there all along to make him the Outsider.

In Detective #349 we see him again as a behind-the-scenes string-puller: 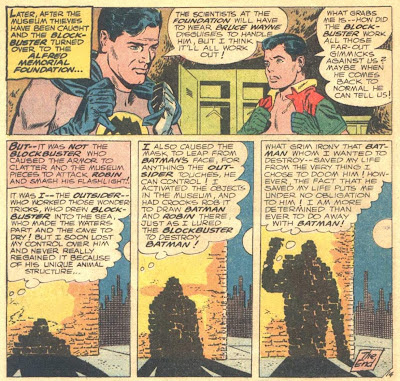 And in the letters page of that issue, Henry Goldman of Philadelphia guesses the answer to the riddle: 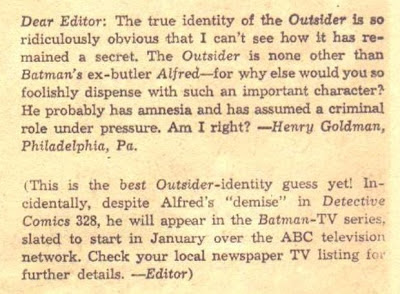 Note that he's working it out on the meta-level, not analyzing it inside the story but as "Why would an editor and writer do this?"

Finally, in Detective #356, we get the big reveal: 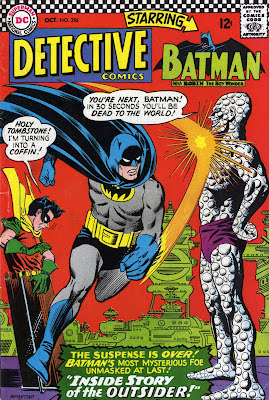 Bruce and Dick receive a delivery of two large and long crates. Inside they find two coffins. Dick's has a mannequin of Robin, while Bruce's has one of Batman. The mannequins stand up and tell them they have one hour to live, courtesy of the Outsider. They quickly deduce what they've suspected all along:

But there's still a surprise for us: 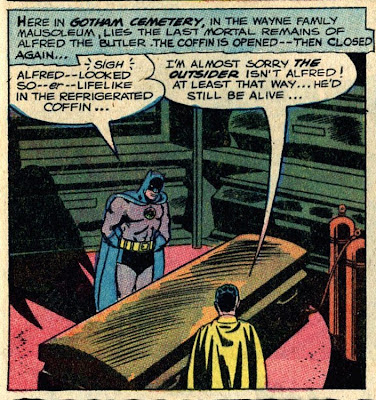 Following this we get a flashback to Alfred's death, and an explanation of what happened "Three days later" (no kidding). After Bruce and Dick leave Alfred that night, a nutty scientist (out looking for a rare insect) detects life. And fortunately he's a "bring 'em back from the dead" nutty scientist: 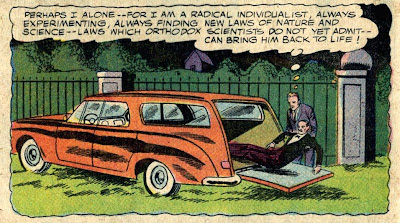 "Muahahahaha! They called me mad, but I'll show them!"

Well, you can probably see the fly heading rapidly towards that ointment, right? Yes, he's got a machine, but it's experimental and just a tad unreliable: 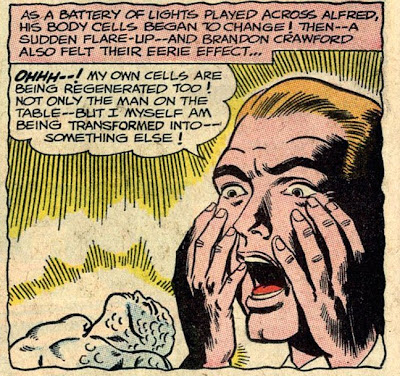 Well, you guessed it. The machine turned Alfred into the Outsider, with the kind of inside-out golfball image we saw on the cover. Oh, and the Mad Scientist? He turned into the spitting image of Alfred. But because Alfred's last thought was to save Batman and Robin, the Outsider's first aim is to kill them.

At the last moment Batman encounters the Outsider and hits the perfect punch: 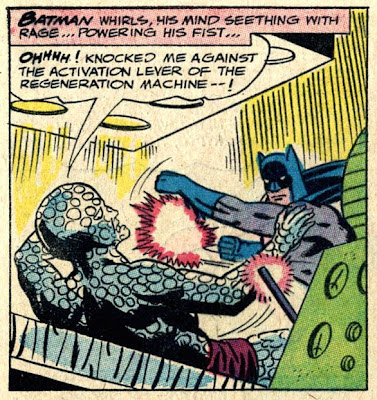 I don't need to tell the rest, do I? Aunt Harriet volunteers to leave at the end of the story, but Bruce, Dick and Alfie all insist that she stay. She did manage to survive to the end of the 1960s, but I can't recall her ever returning after that, except in reprints.

It was a long story arc, featuring the death and resurrection of a major character in the Batman series. Nowadays it seems trite, but it was something of a milestone back then.

Oh, and yes, Schwartz was wrong about the Outsider not knowing who he really was; he knew enough to put that mad scientist into Alfred's crypt.
Posted by Pat at 11:06 PM