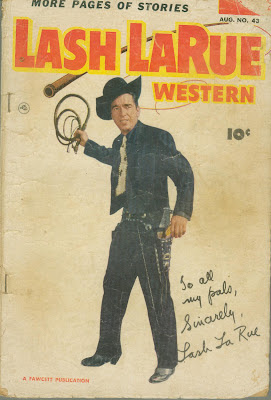 This is about as bad as they get. Let's start with the "non-action shot. Yes, old Lash may look menacing with the whip coiled in his hand, but it's not very dynamic. Second, note the plain white background. Third, look at the body proportions; there's something very weird about that left hand--it looks like a bad cut and paste job,

Fourth, look at the inscription: To All My Pals, Sincerely, Lash LaRue. Lash was never eloquent and flowery in his inscriptions, but he does manage to convey an image of sincerity. Fifth, look at the perhaps ominous blurb at the top, "More Pages of Stories".

Lash LaRue made it through to #46 for Fawcett, and then was picked up by Charlton for another 38 issues, so it made it through the entire decade of the 1950s. The series was based on an actual Western actor whose shtick was that he could really use the bullwhip for which he became famous. According to Wikipedia:

La Rue also made frequent personal appearances at small-town movie theaters that were showing his films during his heyday of 1948-1951, becoming the only cowboy star most children of the time ever got to see and meet in person. His skillful displays of stunts with his whip, done live on movie theater stages, also convinced young western fans that there was at least one cowboy hero who could do in real life the same things he did on screen.

Here's a clip from the climactic battle in a Lash LaRue western: