It's not even a contest:

Batman #169 had a grand total of 2 punches landed in 24 pages; ironically enough in the same panel: 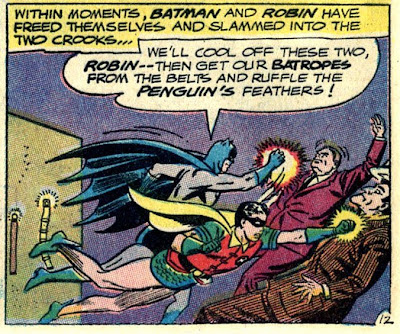 So the theory that Marvel comics were more violent than DC does not seem backed up by this analysis. It is possible that a larger study might find some differences, but I particularly picked two comics that were notable for featuring lots of fight sequences.

Update: One addition. It was definitely my impression that Spiderman had more panels with punches in them. Batman had some very concentrated violence. For example, here's the cover to Batman #174, which had the most punches thrown of any of the comics: 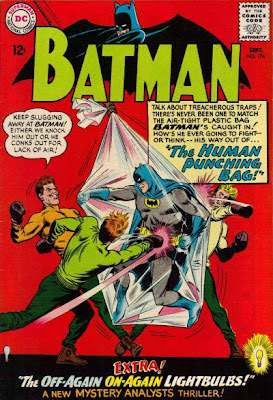 So the plot involves having punches thrown, which not surprisingly add up to a lot in a very few panels.

Still, my overall conclusion remains the same.
Posted by Pat at 3:02 PM