The Death of Lightning Lad

One of the more interesting sagas in the DC Silver Age was the death of Lightning Lad. Although these death and resurrection stories have been overdone since, back in the 1960s this was definitely something quite new and exciting.

The death takes place in Adventure #304. As the story begins, Saturn Girl observes a small capsule arriving near Legion HQ. She picks it up and reads it, then destroys it so that the others cannot learn the message. Next, she uses her power of super thought-casting to compel the other members to elect her leader of the Legion. Oddly, she then becomes a tyrant:

It turns out that the medallions siphon off the powers from the Legionnaires undergoing the tests, which Saturn Girl unreasonably declares they have failed. She demands that each of them refrain from using their powers for at least a month. Then, the Legion receives an urgent bulletin:

But Lightning Lad, learning of the message Saturn Girl received at the beginning of the story, disobeys her orders and heads into space with her, where:

Back at HQ, we learn that Mon-El, still in the Phantom Zone (he would emerge in the next issue), had seen the message, which revealed that a Legion member would die in the battle with Zaryan. Hence Saturn Girl's tyrannical behavior was intended to ensure that only she would die in the battle. We see Lightning Lad's last words: 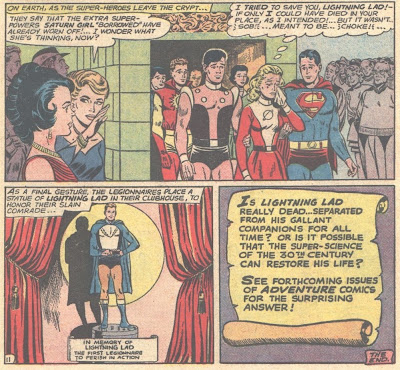 And in the next few issues, there was usually some mention of Lightning Lad's bravery:

As well as hints that he might be revived: 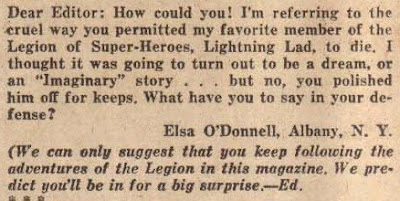 Of course, those who had been paying close attention knew that Weisinger had to bring back Lightning Lad, because in a story published about a year earlier, we learned that LL and Saturn Girl had married.

Finally, in Adventure #312, the story was resolved: 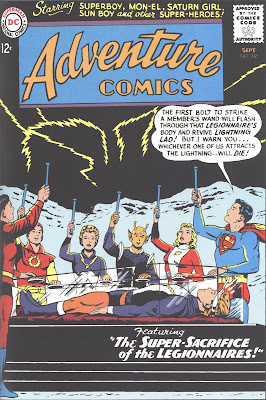 In Adventure #304, Mon-El had mentioned that he might be able to find a way to restore Lightning Lad to life on his home planet of Daxam. When he returns, he claims that his trip was in vain, but Saturn Girl senses with her telepathic powers that he's lying. Eventually she learns the secret; while there is a way to revive Lightning Lad (through lightning as shown on the cover), inevitably it kills the person who brings him back to life. So one of the Legionnaires must die. They decide the only fair way is for all of them to take the risk. Saturn Girl apparently gets the short straw: 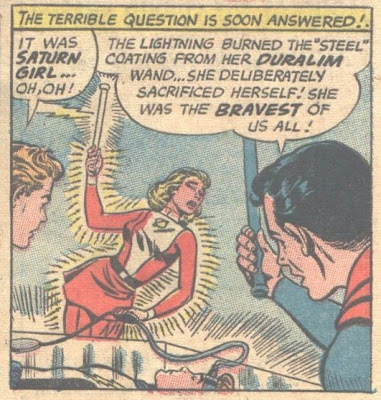 But it turns out to be Proty: 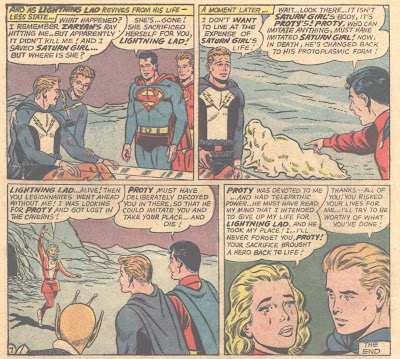 And a few issues later: 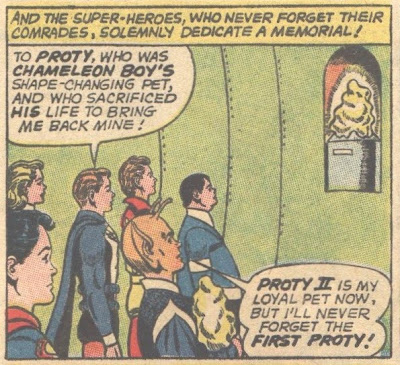 Of course, Lightning Lad's trials and tribulations were far from over in the Silver Age.
Posted by Pat at 11:26 PM

Anonymous said...
This comment has been removed by a blog administrator.
1:19 AM

Great post. Adventure 312 was one of a handful of comics whose cover I remember from my pre-teen years.

Ah, that strikes a deep chord within me. That issue of Adventure was my first comic book I purchased with my own sticky allowance. This "reading" stuff was still a great and new challenge and my young self pored over the fantastic assortment of alien images and superscience devices with absolute fascination.

I'm not sure what made me pluck that off the twirly rack.

Can't believe that the other two comments foreshadow what I knew I would write when I read this fine post.

1) For me also,CMN, this is a cover indelibly engraved in my memory. The black background created an atmosphere of seriousness, mystery and suspense I had not felt from the covers of the few other comics I can remember reading before this.

2) And Blaze, it is also the first comic I recall buying for myself.

Great post (as usual) for what is for at least three readers, an iconic issue.

Not only an amazing coincidence and the spontaneous formation of the Adventure 312 Fan Club!

Further reflection makes me marvel further at how this particular issue was my (our) first. It was a very serendipitous choice by a kid in Grade One. As described here, the previous #311 would have been a complete dud. It was character-driven, requiring the reader to have a certain familiarity with the Legion and know enough to be concerned and baffled at Saturn Girl's creepy behaviour.

#312 was a solid, plot-driven story. No previous knowledge was required to enjoy these colourful characters racing around the universe trying to resurrect their friend.