The Best Silver: Batman #127's The Second Life of Batman

Here's a story that's so far ahead of its time that I have to admit that I blinked a bit when reading it. There have been many "What If" stories over the years about Batman, but here's what surely must rank as the first: 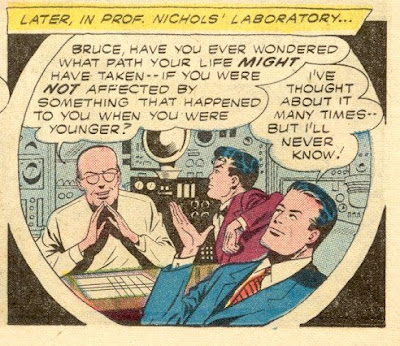 Well, you can probably guess the single event that Bruce would like to not be affected by; the death of his parents. So Dr Nichols hooked him up to a machine that told him what his future life would have been like.

A side note: This appears to have been mirrored by a terrific Superman story that same month, in Superman #132, called Superman's Other Life.

As it happens, Thomas and Martha Wayne did not survive much longer than they had in Bruce's original life; we learn that they perished a few years before this story in an automobile accident. We see the dissolute lifestyle that Bruce would have led with his, um, merry chums: Hilariously (and ingeniously) Bruce shows up as Superman. However the young playboys are distressed when a robber (dressed as Batman but called the Blue Bat) shows up. The real Superman arrives to save the day, but Bruce also helps out with his natural athletic ability.

When the Blue Bat's mob beats him up, Bruce decides to get revenge. He dons the Bat's costume and faces him down. And in the end he resolves: 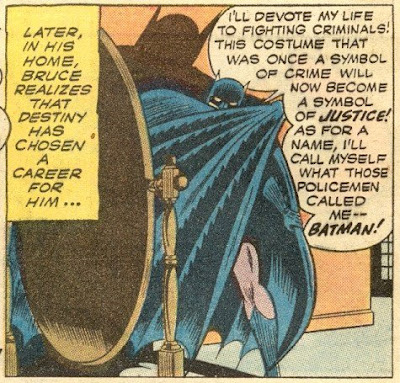 That is just beautiful. In the early days, Batman often did that bit with the cape across the lower part of his face, a la Bela Lugosi in Dracula, but it had been years since it had been seen. It's just a minor detail, but great stories always get the minor details right. And check out the closing panel: 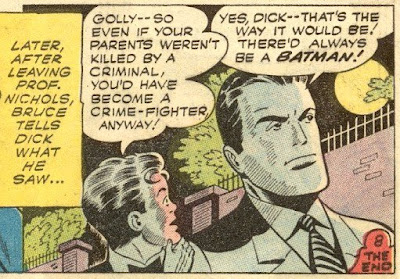 Wow. Art by Dick Sprang, Story by Bill Finger.  Note again the usual DC comics' inexorable nature of fate, in that Bruce's parents would still have died and Bruce would still become Batman.
Posted by Pat at 6:39 AM

Email ThisBlogThis!Share to TwitterShare to FacebookShare to Pinterest
Labels: Batman, Best Stories, Silver Age Comics, What If Stories
Newer Post Older Post Home
Contact me: pcurley49+6 at gmail dot com (do the arithmetic to get a usable email addy).