On the Dividing Line Between the Silver Age and Modern Comics

This came up tangentially in the most recent quiz. What is the Silver Age and what is the Modern Age?

I tend to go with the 1955-1970 timeline for the Silver Age, although there are numerous reasons why this doesn't always work. The key factor in my mind about Silver Age Comics is the influence of the Comics Code Authority, for the simple reason that it ceased to be a major factor after about 1970.

As evidence, consider the famed "drug" issues of Amazing Spiderman #96-98 (May-July 1971). They were the first comics by a major publisher to ship without the CCA seal of approval: 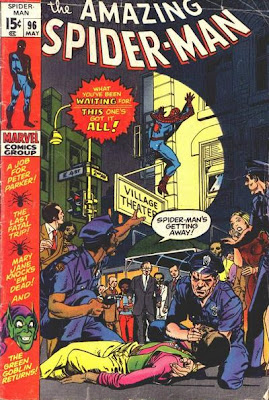 The series was almost ludicrously anti-drug, with the young man shown on the cover above falling off a roof because he was high on something (we are not told what). Harry Osborn becomes addicted (heh) to LSD by a guy who gives him his first batch for free. Stan clearly had about as much understanding of drug effects and distribution as Lawrence Welk did.

Contrary to expectations, the world did not end. Distributors still distributed the books, newstands (remember those?) still sold them, and the CCA was exposed as a paper tiger. And only a year later, DC would publish its famed Speedy on Smack series, with a much more nuanced plotline that managed to garner the CCA's approval.

So we can see that within a very short period of time, what the CCA was willing to endorse changed significantly.

Another indication comes in the kinds of comics issued towards the end of the Silver Age. For example here are the new comics that DC published in 1968 and the genres they fit into:

(Note: Publication date used to determine whether the comic was published in 1968, not the cover date)

As you can see, a variety of titles were launched, but the focus still was on superheroes. Now let's look at the titles DC initiated in 1971:

Quite a difference there; only one new superhero book launched, and that was part of Kirby's Fourth World series. By contrast, the horror genre, which had been virtually eliminated during the CCA's heyday, returned with a vengeance. And even that doesn't tell the whole story; several DC mags also reverted from superhero to horror or other genres, including House of Mystery, House of Secrets and Strange Adventures.

Similar things were happening at Marvel, although I don't have as good a database of Marvel Comics to do the numerical comparisons. However, once again, here are the comics that Marvel initiated in 1968:

Again, a very decided move away from superheroes. Indeed, all of Marvel's long-running superhero mags had been introduced by 1968, and all of their major long-running features (the solo series heroes/teams as well as Captain America, Sub-Mariner, Dr. Strange, Hulk) had been introduced before that. The only new series Marvel launched in 1970 that had any staying power was Conan the Barbarian, which I'd classify as an "Adventure" comic with horror themes.

Now it's true that all these things happen in a continuum; it's not like people woke up one day and the comics had changed from Silver Age to Modern. But if you have to draw a dividing line, I'd be much more inclined to point to Amazing Spiderman #96 as marking the true beginning of Modern comics than ASM #121, which others have argued for. The death of Gwen, while shocking was not all that new--see Ferro Lad, Alfred the butler (temporarily), Lightning Lad (temporarily), Proty I, Frederick Foswell, Captain Stacy... the list goes on.
Posted by Pat at 6:27 AM