The second book opens with the Martian Manhunter being transported to Earth by Dr. Erdel. Darwyn Cooke (the writer and artist for the series) clearly intends to follow the chronology of the Silver Age DC heroes, and thus MM is the first to appear, as he was in Detective #225 (November 1955). We see that Wonder Woman and Superman are both involved in missions in Southeast Asia, although it appears that they don't care much for each other. Diana has freed some women from the "rebels" who then turned on their captors and killed them. Superman is appalled and threatens to tell "the undersecretary".

This sequence appears to place in Vietnam, and from other context later we can see that it's in the mid-1950s, so Cooke has done some time compression. We learn that a police scientist named Barry Allen survived a close call with death when he was nearly hit by lightning that splashed some chemicals on him.

The Martian Manhunter has become John Jones, Detective. He teams up with Slam Bradley to try to rescue a young boy who has been kidnapped. They arrive to find that Batman is already fighting the kidnappers and they assist in the rescue of the youngster.

In the next sequence, Ted (Wildcat) Grant is boxing against Cassius Clay (later known as Mohammed Ali) in Vegas. This again gives us the time period as the very early 1960s, as Clay has not yet become the champion, but he has turned pro (which he did after the 1960 Olympics. Improbably Grant ends up beating him. Of course the real Clay was not beaten as a professional until the first Ali-Frazier fight in 1971.

After the fight is over, Captain Cold shows up to try to steal the purse. But he screws up by freezing Iris West while she is on the phone to her fiance. Barry (as the Flash) hotfoots it to Vegas and foils Cold's robbery attempt.

The politics in this issue is handled much more indirectly. Oliver Queen storms off when Lois Lane denounces the Flash as being every bit the criminal that Captain Cold is (for violating the laws against being a superhero). Of course, this is contra Queen's personality late in the Silver Age, when he never backed down from expressing his political opinions.

At the end of the story we learn that Chuck Yeager has arranged for Hal Jordan to get a job at Ferris Aircraft. We can see that he yearns for excitement.

Comments: Overall this issue is mostly a stage-setter. The characters are beginning to move into position, but the major plotline has only been hinted at so far. The Flash sequences are delightful: 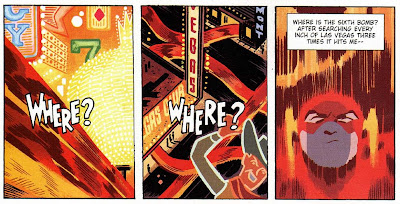 But Cooke still has some characters to introduce before the series really takes off.
Posted by Pat at 10:35 PM