Although the Silver Age of Comics ended (in my estimation) about 38 years ago, the market is still served via Archive Editions (DC) or Masterworks (Marvel). In addition, several modern comic book series have been produced to provide new looks at the Silver Age characters. Three that I have specifically in mind are the Silver Age series produced by DC around 2000, 1963 by Alan Moore, and The New Frontier, released by DC in 2004.

I thought I would take a look at that last series over the next few days. I will say right up front that while the series has a few unfortunate flaws, it comes with my highest recommendation. It is a fine achievement in storytelling and captures the essence of the Silver Age while clearly reflecting modern sensibilities as well.

The name, "The New Frontier", refers to a phrase used by John F. Kennedy in his acceptance speech at the 1960 Democratic National Convention:

We stand at the edge of a New Frontier—the frontier of unfulfilled hopes and dreams. Beyond that frontier are uncharted areas of science and space, unsolved problems of peace and war, unconquered problems of ignorance and prejudice, unanswered questions of poverty and surplus.

In the title it evokes the same era in comics, as DC began the great revival of superheroes that became known as the Silver Age.

The story begins with the Losers, several of DC's Silver Age WWII characters, stranded on an island with a T-Rex. This evokes the rather oddball "WWII and dinosaurs" era of Star Spangled War Stories in the mid-1960s, although the Losers (Captain Storm, Gunner, Sarge & Pooch and Johnny Cloud) came along later. The T-Rex kills all but Johnny Cloud, who avenges his fellow losers: 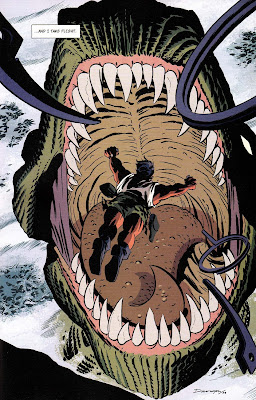 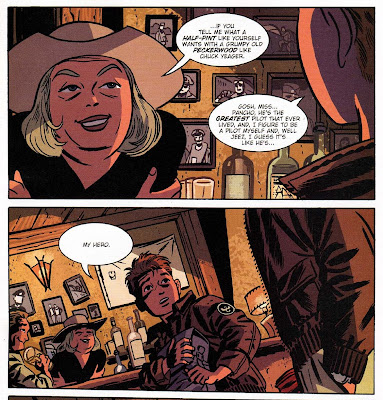 There is a moment in every great comic where the reader suddenly realizes that this is going to be really good. For me it came a few panels later, when it is revealed that the young lad who idolizes Col. Yeager is Hal Jordan. It's the missing piece of the puzzle, the moment where we understand why Hal became a test pilot for Ferris Aircraft in the Silver Age. It may seem minor, but an additional piece of characterization for one of DC's major SA characters that fits what we already know and yet adds depth to the character? Priceless.

This highlight is followed by a bit of tedious political correctness that has apparently become part of the DC mythos. We are told through an Iris West feature article that the Golden Age comic heroes of the DC Universe were banned and either retired or hunted down during the McCarthy-inspired "Red Scare" of the 1950s. This merges Earth-1 with Earth-2. We hear that Roy Raymond got caught up in the blacklist and that's why his show was canceled. We also learn that Richard Nixon was behind it all, and Superman was the enforcer of the edict against superheroes.

The negative of this nonsense is that it wasn't true. DC's Golden Age Superheroes were not forced to take a dirt nap by anything other than consumer (lack of) demand. Roy Raymond's series was canceled in 1961, well after the Hollywood Blacklist had been broken.

When this tedious bit is followed by the revelation that Hal has become a young fighter pilot in Korea, but that he refuses to shoot down enemy pilots, I resumed my skepticism that the story was going to prove pleasing. Fortunately I was wrong, but this was a silly attempt to shoehorn in the prohibition against killing. Perhaps we can buy Hal's refusal to become an ace, but how do we understand his commanding officer's acceptance of same?

The last part of the first issue weaves in Lois Lane and Jimmy Olsen. Hal actually does kill an enemy soldier, but solely because he cannot remember Korean for "The war is over."

Comments: This issue has some terrific moments but also slips into an annoyingly PC view of comic history at the end that actually had me wondering if it was worth continuing. If you get through the first book and are wondering as well, definitely read on. There will be more annoying moments, but the good parts outweigh the bad by a large margin.
Posted by Pat at 7:52 PM