Well, actually I have two of them, and although they appeared within nine issues of each other, one of them is in the Golden Age (Detective #211's The Jungle Cat-Queen) and the other is in the Silver Age (Detective #220's The Second Batman and Robin Team).

They're both terrific stories but while The Jungle Cat-Queen has been reprinted numerous times, The Second Batman and Robin Team has not appeared in print for 53 years. And that's a shame because it's a gem of a story.

It begins 700 years in the past, when famed scientist of the Middle Ages, Roger Bacon, notes a curious coincidence. He discovers that two strangely-garbed males (Batman and Robin) had appeared three times in the past and excited much comment. The oddity is that the places were separated by thousands of miles geographically and centuries in time; once in Ancient Greece, once in Ancient Rome, and a third time in the medieval Viking era.

Bacon deduces from these three appearances that Batman and Robin must be from the future, and further that this indicates that scientists in the future have learned how to travel through time. He puts his mind to the task and shares the results with two of his pupils, brothers Marcus and Guy Tiller (who happen to resemble Bruce Wayne and Dick Grayson:

Arriving in the future Gotham City, Marcus and Guy gape a bit at the skyscrapers and cars, and mistake a plane for a dragon. But they quickly realize that they are the only people dressed in strange costume. A policeman advises them that the Bat-Signal is in the sky and tells them to go to police headquarters. Commissioner Gordon notes that the pair talk a little oddly and have medieval weapons with them, but... well, he's learned not to ask too many questions, I suppose.

Meanwhile, the real Batman and Robin arrive just in time to see their counterparts entering Police HQ. Changing quickly to Bruce and Dick, they rush inside to see what the fake Batman and Robin team are up to. Commission Gordon tells the ersatz duo that the Speedboat Bandits are going to rob the Dock Street Bank, and that they should apprehend the mob.

The medieval pair head off in search of the Dock Street Bank, with the real Batman and Robin trailing behind. They are sure that the fake duo must be intending to help the crooks, but sizing up the situation quickly Marcus and Guy decide to foil the robbery. They succeed but are kayoed in the effort by a blast. Batman and Robin take the pair back to the Batcave, where they learn the true story. The Great Question comes up again: 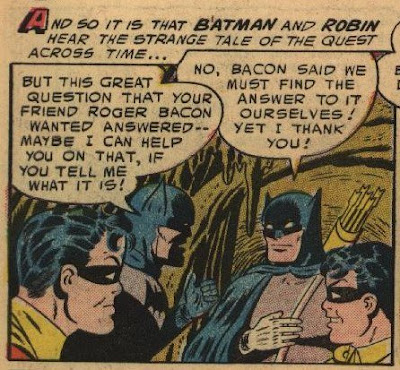 This is a form of foreshadowing, of reinforcing in the reader's mind that they want to hear the Great Question. We sense that a climactic moment in the story will be when the Great Question is finally revealed.

Batman and Robin suggest to their new friends that they remain in the Batcave while the Dynamic Duo wrap up the case of the Speedboat Bandits. But: 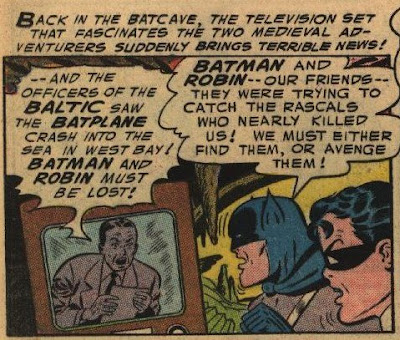 As it turns out, Batman and Robin had tricked the crooks, and the medieval pair end up alerting the villains, who were hiding out in a lighthouse. With the dual teams trapped nearby, they turn to the old methods, using a trebuchet (similar to a catapult) and a mantelet (a covering to prevent fire from above) to attack the lighthouse, and eventually defeat the villains. And in the end we learn the Great Question: 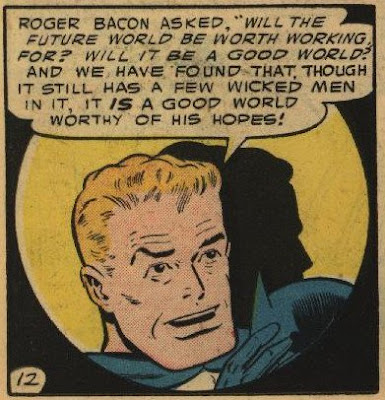 Wow. Now that is a Great Question, and a great answer. And the final panel does not disappoint either: 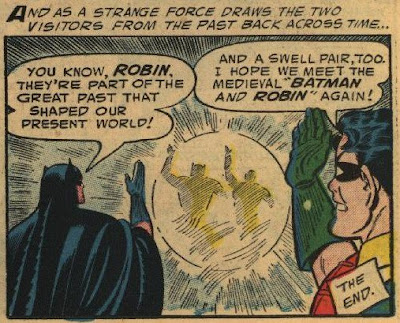 Note that despite the obvious "fish out of water" plot, the focus is not on what a pair of buffoons Guy and Marcus are. They are not played as the Beverly Hillbillies, but as good men from another time whose knowledge and experience may be different from ours but valuable nonetheless.

GCD tentatively credits the script to Bill Finger. The artwork of course is by Dick Sprang at his absolute peak.

Update: I'm going to tentatively credit the script to Edmund Hamilton. Note the very similar sentiments expressed by Batman in that panel and by Bruce in this one: 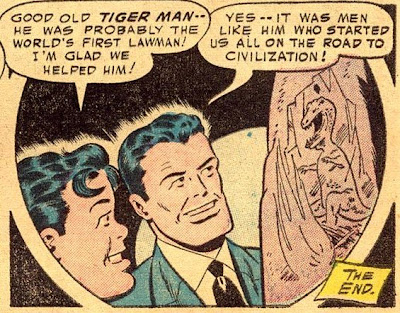 That's too close to be coincidental. That comes from The Caveman Batman in Batman #93, which GCD says was by Hamilton.
Posted by Pat at 6:43 AM