One of the oddities of the Silver Age is how secular comics often seemed, especially compared to the rest of society. It's even more obvious when you look back at comics in the 1940s, which often featured Christmas scenes; both Action Comics and Batman comics had annual Christmas stories until about 1947. And then... virtually nothing.

Ditto with Thanksgiving, perhaps even more so. It was almost never brought up in the Silver Age, with only a few rare exceptions, one of which was Strange Adventures #132 (September 1961).

I've talked about the splendid Atomic Knights series in the past. It was set in a post-apocalyptic America, after an atomic war had devastated most of the planet. A band of knights (in radiation-proof armor) had banded together to fight injustice and help humanity get back on its feet again. The series appeared every three issues in Strange Adventures and, uniquely for DC at the time, the story progressed a little bit with every appearance.

In Strange Adventures #129, the Atomic Knights had battled ancient Atlantis, which had apparently jumped forward in time due to their own apocalypse (caused by a cobalt bomb). They escaped with some seeds and fruits from that island, which they planted back in Durvale (their headquarters). Fortunately, the seeds grew quickly: 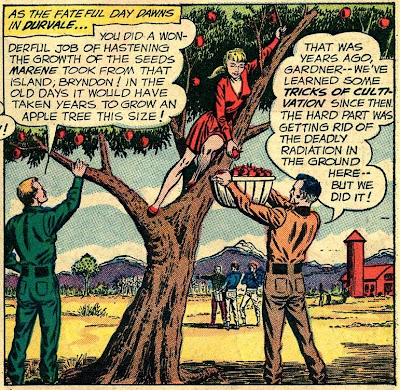 So they were able to have a Thanksgiving meal with several of the other small bands of survivors:

Gardner is distracted by a sudden attack by the Atlanteans (oddly called the Atlantides). They fend off the attack thanks to their armor, which protects them from an odd, mirror-laser contraption that the enemy uses for a weapon. And in the end, Gardner has an answer for Marene's question about peace on earth:

Comments: The story seems to have chopped up for presentation in several issues rather than one, book-length tale (which would include the AK stories in Strange Adventures #129, 132 and 135, all of which featured the villains from Atlantis).

Are there any other Thanksgiving tales you can remember from this era?
Posted by Pat at 2:52 PM