One of the highlights of the Superboy pilot which I posted last week is the scene where Superboy creates diamonds out of coal. It is my recollection that one of the 1950s Superman episodes on TV was the first place this happened. According to this list, the episode in question is #40, Jungle Devil:


The reporters are on a jungle expedition that involves a valuable diamond used as an idol's eye. Superman creates a diamond by compressing coal.


The episode appears to have originally aired sometime in 1953.

Reading through the Superboy stories in Adventure, I noticed that beginning around late 1956, the Lad of Steel made a whole bunch of diamonds. For example, in Adventure #231, he makes them as consolation gifts for other boys who were turned down for a job in favor of him: 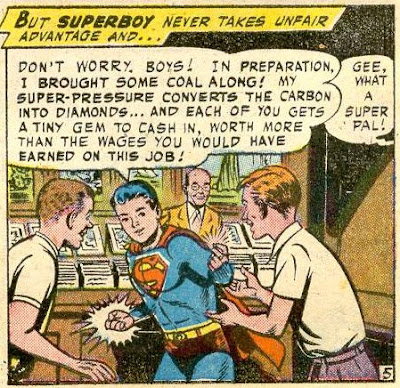 In Adventure #244, Ma and Pa Kent experience disaster as both their house and store burn down while they are away on vacation. To make matters worse, Pa had forgotten to mail off the insurance check before leaving, so they are paupers. Superboy tries to help them out here: 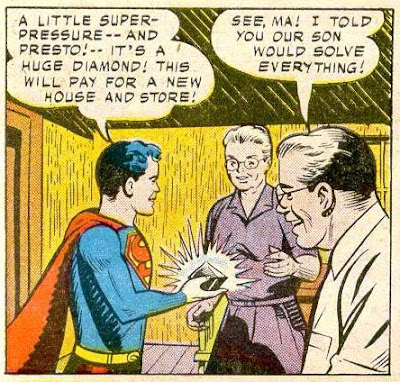 But the diamond turns out to be a problem, as the jeweler in Smallville doesn't believe it could be real and the one in Metropolis assumes they stole it.

In Adventure #257, Superboy goes into the past to help Hercules and Samson, who have been stealing jewels from the local tyrant and distributing them to the impoverished citizens, but there's something he can't do: 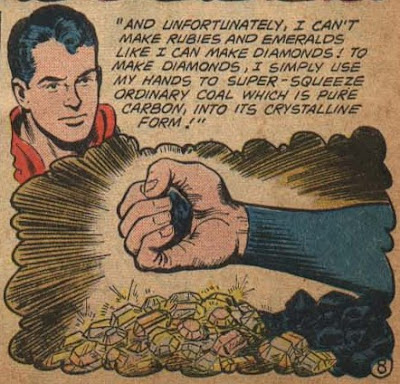 And in Superboy #88, in the story that follows the pilot for the TV show closely, Superboy creates replacement diamonds for those stolen so that a movie premiere can go off as planned: 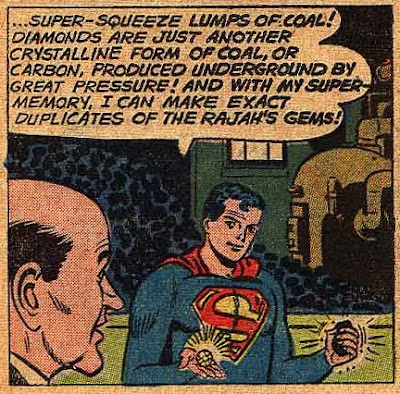 Cecil Adams, who writes the Straight Dope column that appears in many arts and entertainment newspapers around the country, tackled Superman's diamond-creating abilities a couple years back in a discussion with his assistant, Una:

I gave it a shot anyway. I pointed out that HPHT required an elaborate press of intricate geometry to concentrate the compressive forces. It wasn't as if Superman could just grab a lump of graphite and squeeze it like a tomato.

He's Superman, said Una. According to Wikipedia, he can withstand the impact of a nuclear explosion. You're saying diamonds are going to stymie him because he hasn't got the right belt-press jig?

Me: I'm saying if "he's Superman" is the answer to all questions, why are we having this discussion? He can do anything he wants by magic. We're trying to establish what somebody with unlimited strength could do in real life.

Una: Nobody has unlimited strength in real life.

Me: I know that. That's the point. We have to set some reasonable bounds on the question. Let's say you've got enough strength to manage 130,000 atmospheres. Is that alone enough to create a diamond? I say no. Never mind the special press, you still need a temperature of 3,100 degrees.

The ability to create diamonds was featured in the otherwise forgettable Superman III back in 1983:


Skimming over the trees, Superman sees a coalmine, and lands there with Gus. Walking over to a pile of coal, he grabs one piece and uses his super strength to make a large diamond in his bare hand.


I can't remember coming across another example of the diamond-making bit in an Adventure issue prior to #231. My guess is that it happened in that Superman episode I recall, and the writers/Weisinger picked it up from there. I will look for examples of Superman creating diamonds in the comics as well and will update this post as needed. Any help from my readers and other bloggers is, of course appreciated.

Update: We have a new candidate for earliest appearance: Superboy #26 (June-July 1953): 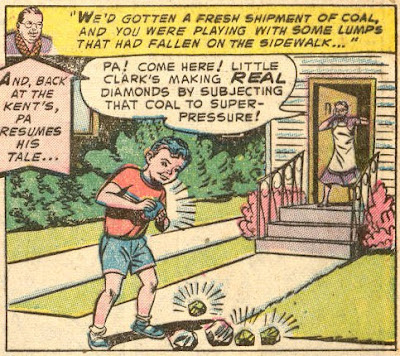 Update II:The diamond trick apparently goes back into the 1940s; in Superman #60, Supes pretends to be secretly Perry White in order to flush out a gangster, and a man asks him for financial aid: 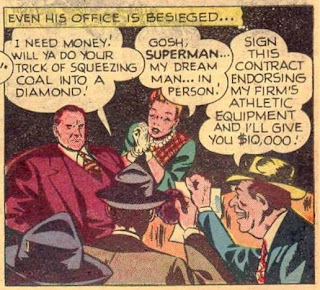 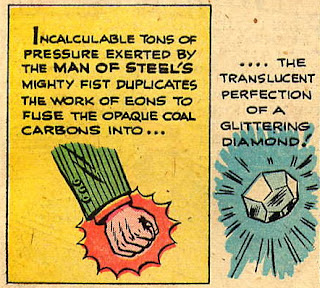 Superboy/Superman creating diamonds out of coal is one of my favorite things to see. While all his powers are impressive the idea of turning a lump of coal into a diamond was something I could really imagine and "see" as a little kid. Great stuff. I'd love to know if Adventure #231 is the first time in comics for sure.