A Graphic Analysis of the Adventure Comics Superboy Swipes

While making my way through reading all of the Superboy features in Adventure Comics, I've been quite startled at the number of swipes. But some things only become obvious when you look at things in a graphic fashion, and here's a look at what I've uncovered so far: 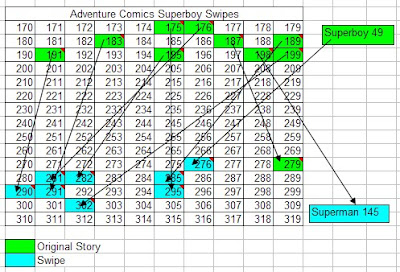 This may not be a complete look at the swipes, but I am confident I have identified most of them.

There are two obvious patterns in the data:

1. The swipes all fit into the course of 27 issues; in that run, there were 9 swipes. Thus, about 33% of the Superboy stories from Adventure #276-302 were swiped from earlier tales. These issues were published from September 1960 to November 1962. Note that this applies to the story in Superman #145 as well, which bore a cover date of May, 1961.

Of course, the question becomes why did Weisinger swipe so many stories during 1960-1962? I suspect the reason can be seen on this cover: 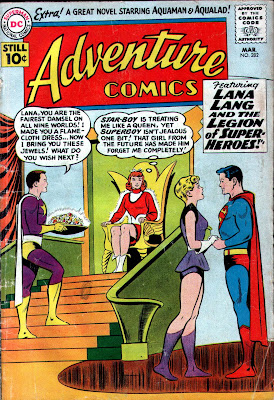 Do you see the clue? It's this:

The comics companies were all under pressure to raise their prices in the late 1950s and early 1960s. Dell Comics tried to lead the way to a 15-cent cover price in 1958, but eventually had to go back to 10 cents when the competitors didn't budge. But in December 1961, DC raised the cover price of all its magazines to 12 cents and their competitors followed suit.

I strongly suspect that Weisinger was trying to cut costs wherever he could to maintain profitability. It would make sense that he could pay his writers somewhat less for recycled stories; as I have documented, many of the stories were almost word for word swipes from the earlier tales.

Why did he stop the swipes? I suspect there are several reasons:

1. The price increase reduced the pressure to cut costs. Two cents may not sound like a lot of money, and in all probability DC split the increase with their retailers so that they only netted a penny. But in 1962, Adventure Comics was selling 415,000 copies an issue; that works out to an additional $4,150 in revenue to DC. It's true that circulation did drop with the price increase, from 460,000 in 1961, but if we assume again that DC was only getting half the old 10-cent cover price from their retailers, the net increase is still $1,900.

2. The increasing influence of fandom may have caused Weisinger to cut back on the swipes. Although I was unable to locate a letter in the Adventure letter columns complaining about the recycled stories, I doubt that it went completely unnoticed by the older fans.

And it's not as if Weisinger entirely discontinued the practice; he just became a little more transparent about it. In Adventure #317 this announcement appeared: 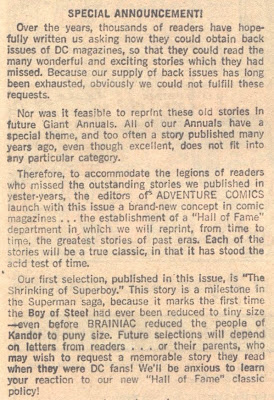 The Hall of Fame classics were published until Adventure #345, after which the Legion stories were expanded to book-length.

Incidentally, I first became aware of the Superboy swipes sometime in the 1960s or early 1970s when DC reprinted the story in Adventure #191 and its swipe in Adventure #290. I can see that the latter tale was reprinted in Superboy #147, but the GCD does not show when the former tale was republished. Anybody know what issue that was?

Update: Discovered that Adventure #279 was a swipe from #187; I have updated the graphic and a few other places in the original post.
Posted by Pat at 12:58 PM

This is one of my favorite blogs to begin with, but when you mine the data like this, it rises even further above the others. Keep up this perspective and the insights that follow. Great work!

Brilliant bit of scholarship there. I love the fact Weisinger couldn't reprint stories in the 80 page giants because they were themed! Just imagine....

Keep up the great work!

I agree with the foregoing, Pat. That's an excellent bit of analysis, and your conclusion makes sense.

In fact, it's got me wondering if the other DC editors also took cost-cutting measures, and if so, what were they?