While looking through the early 1960s letters columns in Adventure Comics to see if anyone had written in to complain about the Superboy swipes (see previous post), I came across this missive: 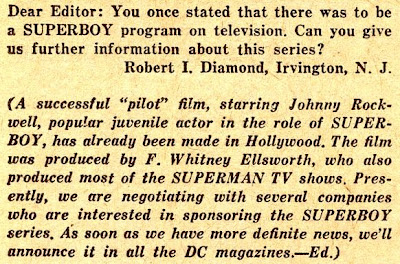 I had never heard about an early 1960s Superboy pilot, so I did some searching and found it on YouTube:

As you can see, after an origin sequence, the story starts out with a young man who's embarrassed because his dad's occupation is a lowly doorman at the local movie theater. I particularly love the speech his dad (the terrific and forgotten actor, Ross Elliott) gives starting around 5:10 about how if he gets his son through college and into his chosen profession, he'll consider himself as successful as anyone his son knows.

But that's not why I decided to do this post. I realized as soon as I saw the opening sequence in the school that the basic plot was swiped from a comic that I had read recently. Since I've been working my way through the Adventure issues featuring Superboy, I assumed it was there. But it turned out to be another swipe from Superboy #49. Here's a scene from that comic:

As you can see, the focus in the comic is on Captain Joe's phenomenal memory, while in the TV pilot, he's working on becoming an artist. But in both cases he identifies the crooks. The robberies are slightly different, with the criminals stealing diamonds from the movie theater in the TV version, while in the comic they stick up a bank nearby.

Both stories end with the young boy satisfied that while a doorman's occupation may be mundane, his father is not. And both include a job offer for the dad that he turns down: 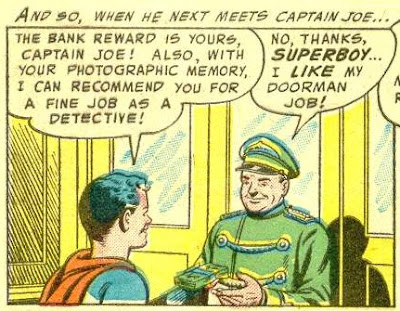 The other thing that is interesting in the pilot is the relationship between Clark and Lana. In the comics it was occasionally hinted that they were more than just friends, but more commonly Lana was just an annoying secret identity pest. In the TV show, it certainly appears that they are dating; note the way they're holding hands after class when they catch up to Jimmy at around 2:48 into the first part.

Here are the other two parts of the episode:

Update: Commenter Tmdess remembered the story being published yet again, and it didn't take me long to find it (with an assist from Commander Benson), in Superboy #88 (March 1961). As you can see, this story is even closer to the Superboy pilot, with the diamonds being stolen from the movie theater while Superboy is dealing with a crook shooting madly from a hideout. It even has the bit where Superboy makes replacement diamonds out of coal. 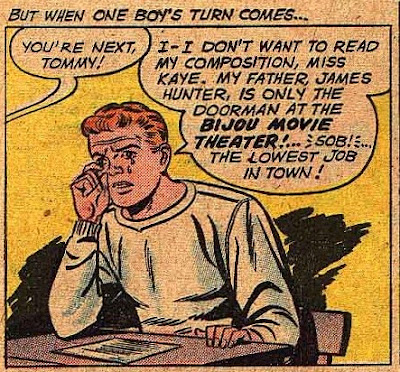 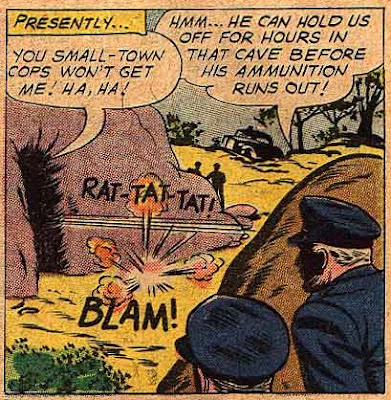 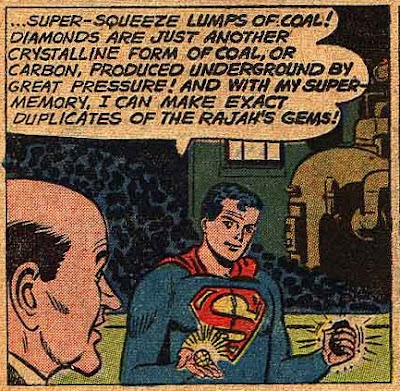 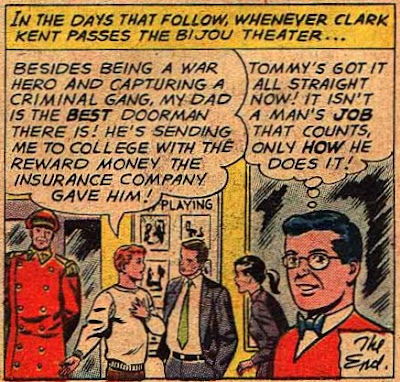 One thing I can't tell is whether this story is swiped from the TV pilot or vice-versa. Either way, it's pretty obvious that what we have here is a double-swipe from the Superboy #49 story. Here's a list of the other proposed episodes (which were written but never filmed). As you can see, there were other swipes from the comics planned. For example, Superboy's New Parents, which I discussed recently, would be another double swipe, and The One-Man Team was also published in Superboy #88: 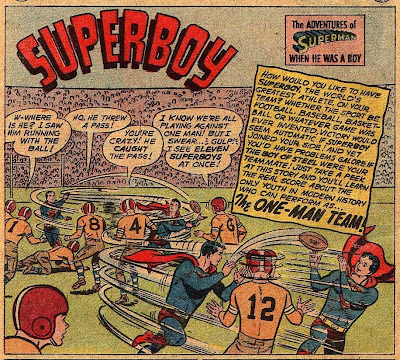 I've seen pictures from this, but never the pilot itself until now. I have to say it's a lot better than I expected. In fact, with all the location shooting and the relatively involved special effects, it's actually got higher production standards than the last few seasons of the George Reeves show. The only let down is the theme music, which is pretty limp.

What's really interesting is that it has a tougher edge to it than the Superman show; despite being about a "kid," it feels more grown up. That, and the fact that Rockwell looks about 25 years old, may have been what did it in. I know they were eager to keep milking the cash cow, but it would take another 20 years for the public to accept anyone but George in that suit.

Oh, and with all due respect to the editor who wrote that note, wouldn't a "successful pilot" be one that sells a series? This one goes in the "failed pilot" file next to "Batgirl," "Dick Tracy" and now "Wonder Woman."

David, I wonder if the issue wasn't simply the format. By the 1960s it was pretty much ironclad that half-hour shows were comedy and dramas were hour-long. I did like the episode, aside from that oddball opening where the guy says "Superboy" in that mysterious, down in a tunnel voice.

BTW, although I agree with you about Rockwell looking older, Wikipedia indicates he was 17.

Maybe it was my imagination, but he seemed to have picked up a few of George's mannerisms, which was nice. However, he had none of the charisma, despite being a pretty good actor.

Not so sure the format was the sticking point, here. There were at least a handful of very popular half-hour dramas still around at the time. "Have Gun Will Travel" springs to mind, and "Dragnet." At the end of the decade, "Adam-12" was still at it.

More likely, the tone of this pilot made it too hard to know what to do with it; it's not fun enough to pitch as a kid show, yet too outlandish to fly (ahem) with adults. And realistically, assuming no aliens or super-villains were in the cards, how many times could you really have gangsters and the like threatening a quiet little town like Smallville before it wore thin?

Personally, I have a feeling nobody else in Hollywood was quite as gung-ho to keep the franchise going as Whit Ellsworth and his DC bosses. Most people probably figured the "Superman on TV" craze had run its course.

I think that doorman story was swiped in the early '60s-- I think the robbers were going after the theater jewels...anyone else remember this?

"The Loneliest Boy in Town" was reycled as "The Saddest Boy in Smallville" in Superboy # 88 (Apr., 1961). As with the television retread, some of the cosmetic details are changed--e.g., in "The Saddest Boy", the father and son are James and Tommy Hunter.

The crooks' "big caper" in "The Saddest Boy" is identical to the the television-show swipe; they rob the jewels on display in front of the theatre where James Hunter works as a doorman.

Little people in animal heads and human clothes on the leftover sets from SUPERMAN. Stars Billy Curtis who was Mr Zero on the George Reeves series (as well as one of the Mole Men I think) as Bark Pant. I am NOT making this up.

A few years back I saw an interview with Johnny Rockwell online. Probably still out there somewhere.

Steve, while researching this post, I heard about that pilot. But I didn't feel up to actually trying to find it. Sounds excruciating.

Amazing World of DC Comics did a piece on this years ago (back when the chance of seeing it was nil). The writer of the article said that it was the comics borrowing from the TV show.
The article also suggested the problem with the episode was that it was very fifties teen-centric and that a more spy-oriented episode might have worked better.