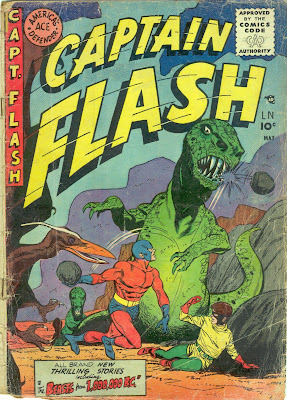 Most casual comics fans know that almost all superhero comics began to die out in the late 1940s. Then the movie skips forward to 1956, when Julius Schwartz, Bob Kanigher, John Broome and Carmine Infantino collaborated on Showcase #4, bringing back a Golden Age hero with a new name, and a new uniform.

But in fact, there were several attempts to launch (or relaunch) superheroes in the mid-1950s. Marvel (then known as Atlas) had three tryout issues of Young Men Comics featuring the Human Torch, the Sub-Mariner and Captain America in 1953-1954. Charlton dusted off the Blue Beetle in 1950 and 1955. And Sterling Comics, a short-lived publisher, attempted a new hero called Captain Flash in 1954-1955.

Captain Flash was actually Professor Keith Spencer. When he clapped his hands together, he would set off a small atomic explosion in his body, giving him super-speed, strength and invulnerability.

As others have noted, the series has a Silver Age feel about it, perhaps because it was drawn by Mike Sekowsky, who went on to illustrate the Justice League of America among other features. Captain Flash had the inevitable youthful sidekick, named Ricky, who does not appear to have superpowers himself, and who (of course) is not his own son.

The opening story concerns "Muscles" a strong-man type who appears to have superpowers of his own: 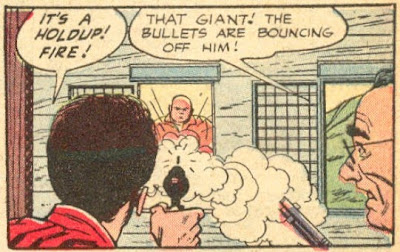 Captain Flash interferes with the robbery of a train, but is kayoed by Muscles (apparently his powers weaken over time and he needed an "atomic charge". Worried that the public will lose confidence in him, Captain Flash offers to box Muscles for a $1,000,000 purse. Here's the action: 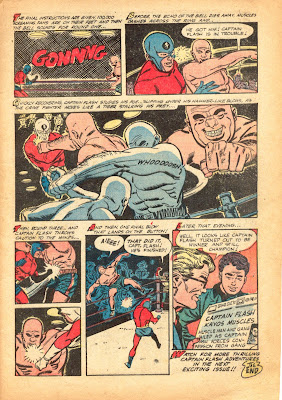 Comments: A pretty dull story, and the climactic fight sequence (shown in its entirety above) is too quick and lacks drama.

The second story is the cover one. Professor Spencer goes to Africa to find out why the uranium being sent back to Atom City is substandard. While there, Ricky is poisoned when he drinks something intended for the local chieftain. There's only one cure and it's located beyond the ice mountains (in tropical Africa?). Using the sonic force of his hand clap, he destroys the ice mountains. Unfortunately a couple of dinosaurs were located behind it. We learn that Captain Flash's moral code is a little more flexible than Superman's: 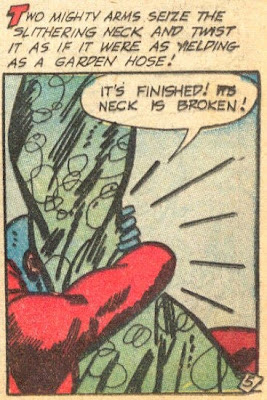 He gets the cure and defeats the bad guy who was trying to poison the local chieftain, who was also responsible for the lower grade uranium.

Next up is the real highlight of the issue: Tomboy! 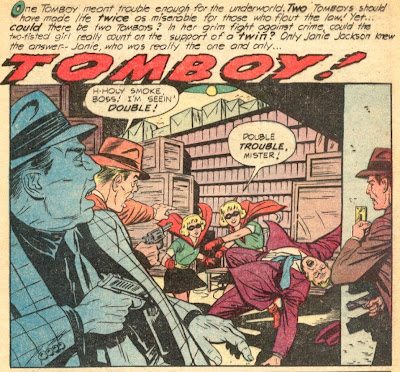 Terry, a local girl is disappointed that Bill Jackson doesn't seem interested in her any longer. Tomboy has supplanted her in his heart as we see here: 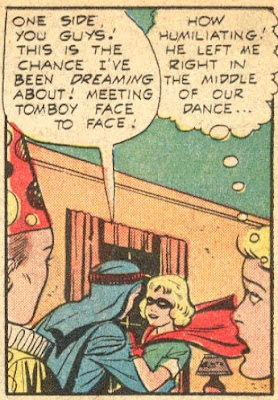 To add a little "ick" factor, Tomboy is actually Bill's sister (although he doesn't know that). Terry, observing how taken Bill is with Tomboy, decides to dress up as her the next day when the police (including their father, who's a lieutenant) are planning to honor the crimebuster. Of course, how she knows the real Tomboy won't show up is never explained, but as it happens Janie Jackson is dragged along by her father to the ceremony, and can't get away to change into her secret identity, so it works out for the best. But after the award is given out, a limo comes to take Tomboy away, but it's filled with gangsters looking to get revenge on her: 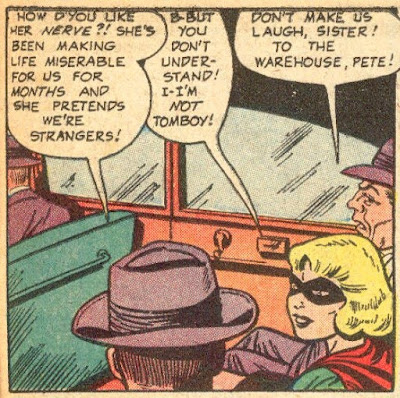 Fortunately Janie's managed to get away in the confusion and takes after the crooks on her motorcycle. She shows she's pretty good with her fists here: 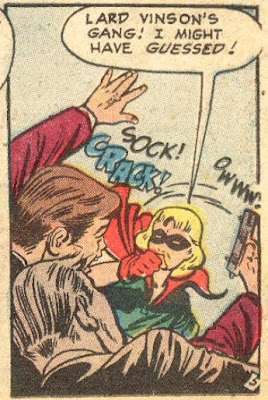 She makes short work of the mob, and frees Terry. Now Terry and Bill both have something in common: Their admiration for Tomboy.

Comments: Although it's way too short a story, I certainly enjoyed the concept of a teenaged girl fighting crime. The only earlier example I can think of offhand is Merry, the Girl of a Thousand Gimmicks.

The final story is another Captain Flash tale. It's a convoluted plot involving an attempt to steal an atomic submarine that involves men in shark suits. Somebody forgot to tell Sekowsky that people can't speak underwater: 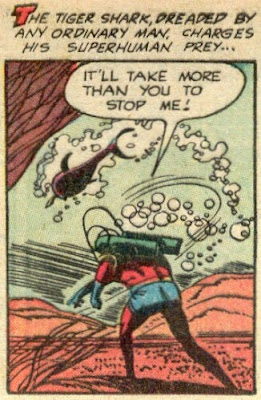 Comments: Dull and predictable. Overall I can see why Captain Flash did not become a big hit; the stories lack any real suspense. I did enjoy the Tomboy tale, however, mostly because of the novelty of the feature and the interesting art by Edvard Moritz (according to the GCD).

Because this issue is out of copyright, it can be downloaded from the Golden Age Comics UK site. I should mention too that the spark for this post came from a poll over at the Silver Age Gold blog about whether Captain Flash was the first Silver Age hero. Amusingly, the options were Yes, No, and Who's Captain Flash, which garnered all the votes.
Posted by Pat at 11:04 AM