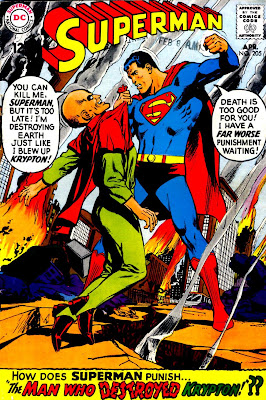 This issue combines almost all of the worst elements of the Silver Age in one horrific tale. Superman is summoned to Washington for a briefing on a new villain:

We learn that he has no fingerprints, purple eyes and a forked tongue. Obviously an alien, he has been encountered by one of our spies: 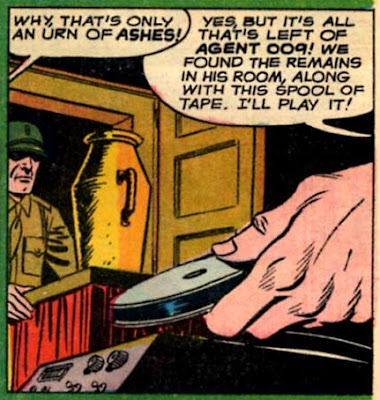 Agent Double-O Nine reports on the tape that Black Zero intends to wipe out everybody on Earth with some secret in his brain. Supes brings Chief Inspector Watkins of Scotland Yard (who was at the DC meeting) to his Fortress of Solitude. Why him? No particular reason is given, but it turns out to be fortunate because: 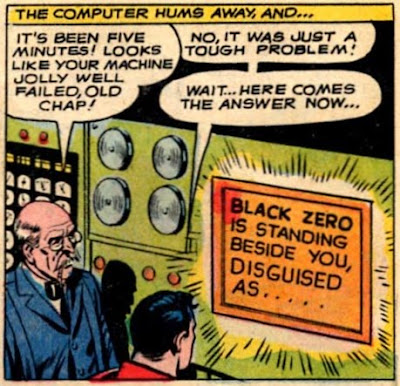 Superman summons help from Kandor, but Black Zero surprises him by countermanding his order--in Kryptonese! How did he know that dead language? The villain explains: 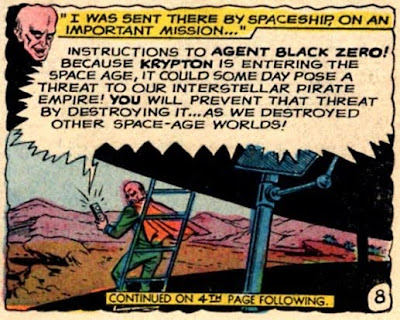 He quickly discovers Jor-El's prediction that Krypton is doomed. Maybe he doesn't have to destroy the planet? No: 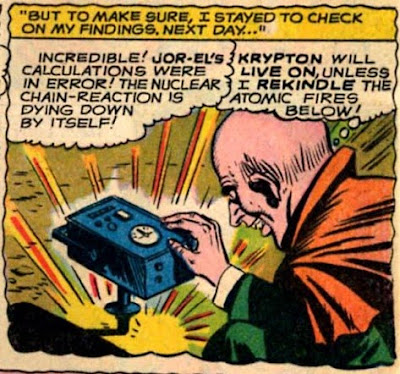 Argggghhhh! How could Weisinger allow that to be published? Jor-El really was "God the Father" back in the DC Silver Age; the wise and benevolent leader of the Science Council. And now we were learning that his calculations were in error, and that in fact Krypton would have survived. Terrible characterization!

Superman initially "sentences" Black Zero to death. But he can't kill the villain because of his code of honor. Jax-Ur, one of the villains from the Phantom Zone offers to help, but Black Zero changes him into a series of snake-beings by projecting a Red Kryptonite bullet into his body. Black Zero sends a bomb towards Earth, which will explode even if Superman stops it. But instead Supes drilles a hole completely through the planet, letting the bomb come out the other side. Meanwhile Jax-Ur has caught up to BZ in a different form: 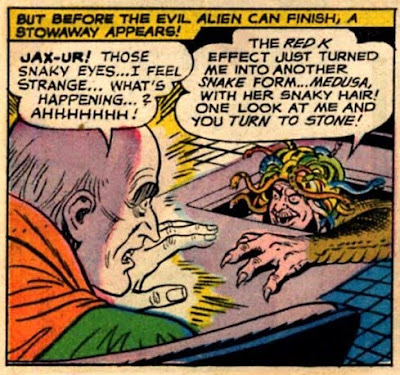 Ending the menace once and for all.

Comments: Ugh! Lousy characterization for Jor-El, revealed once and for all as a crackpot whose prediction of doom for Krypton would have been wrong, had Black Zero not "saved" it. And while I enjoyed Jax-Ur's role in the story, the fact that he avenges Krypton and not Superman is somewhat galling as well.
Posted by Pat at 12:43 PM