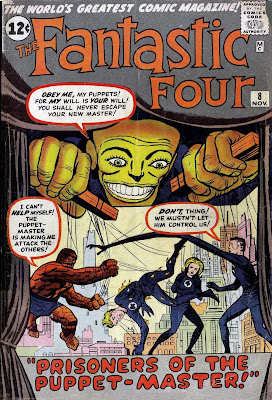 I just realized that one of the reasons many of these early FF adventures seem so padded is because Stan was making sure that he explained the abilities of each of the members. This was also why we kept getting that stock scene in the early X-Men issues with them in the Battle Room; it served as an introduction as well as entertainment.

So it is with the somewhat typical introduction in this issue. Thing is upset that Johnny and Sue won't let him into Reed's laboratory. This allows Thing to remind us that he's a really strong guy and that Johnny can flame on at will: 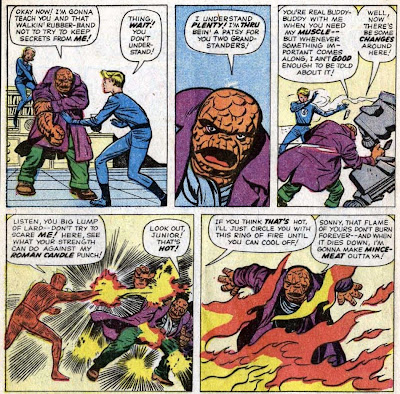 A little later we see Sue use her invisibility and Reed his stretching ability. Johnny flies out and saves a man from being forced (by the Puppet Master) to jump off a bridge.

We learn that the Puppet Master has radioactive clay, which he can use to control anyone he wants. He creates a puppet of the Thing, and forces him to come to his apartment. Sue follows, but is detected by the blind step-daughter, Alicia. We see that Alicia's (who has been disguised as Sue Storm) sense of touch is a little zany here: 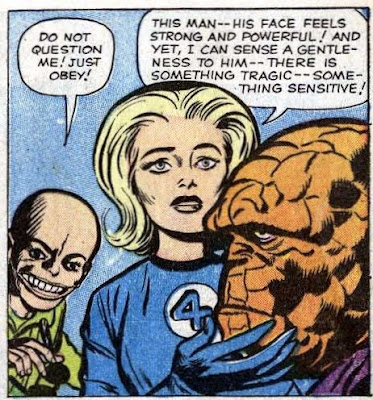 They go back to FF headquarters, where Johnny lets them in. A battle ensues with Alicia standing to the side, but at a crucial moment Ben crashes into a vial of chemicals and: 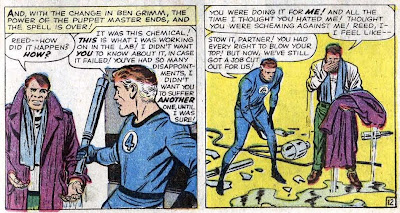 The transformation apparently breaks the Puppet Master's hold on him. But the irony becomes apparent a moment later when Alicia at first reacts less positively to the new Ben Grimm than she did to the Thing. Then he changes back.

The Puppet Master frees the inmates from the local prison by controlling a trustee who has access to the warden's office (no explanation as to why he didn't just control the warden). Meanwhile, Sue escapes long enough to sent a flare up to the FF, who battle the Puppet Master's robot and save Sue, while the villain gets away on a flying robot horse (apparently his puppet skills are limitless).

The FF manage to stop the jailbreak in its tracks. Meanwhile, the Puppet Master returns to his apartment and gloats a bit in front of his daughter: 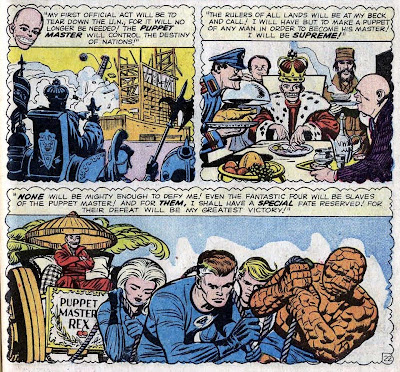 Like any dictator in the 20th century would want to be pulled around on a rickshaw. Anyway, Alicia is determined that he not take over the world, they fight a bit and: 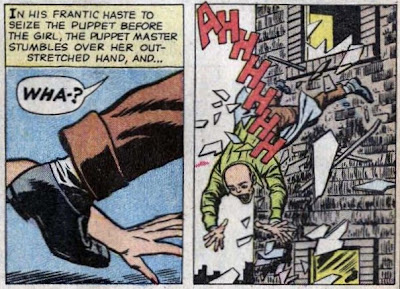 Comments: The Puppet Master isn't a bad villain, and his daughter became a notable part of the Silver Age Fantastic Four. In fact she became the first recurring friend to the FF in general, and the Thing in particular.

As kids I think we all wanted the gruff guy to turn out to have a heart of gold, and that's certainly what we got with the Thing. One oddity that I would point out: At this point all the members of the FF became basically involved in stable relationships. Reed and Sue, Ben and Alicia, and Johnny and Dorrie/(later Crystal). Really the only hint of a soap opera they had going was the bit between Subby and Sue, which may explain why that remained a theme for at least the near future.