Bill Jourdain has another entertaining podcast up, this one discussing the Plot Against Christmas, a Golden Age Captain Marvel tale. If you've never listened to any of Bill's podcasts, I actually envy you, because you have hours and hours of listening pleasure ahead of you.

Bill also puts out a call for support for the Vintage DC Comics Calendar. I reviewed that calendar a few months ago, and loved it. There's one hanging in my breakfast nook right now.

Review the calendar over there to help out the folks at Asgaard Press.

Another new blog for the blogroll! Black 'N' White and Red All Over is posting complete stories, this time mostly from the terrific Warren Magazines like Creepy and Eerie. Check out this Christmas tale from 1973.

Sherm Cohen has been posting some terrific old ads from comic books, showing all the wondrous things that products advertised in comics could do. Columbia Bikes could outrun Roman soldiers and lions! And if you have US Bike Tires on the bicycle, you could capture a dangerous lunatic.

Karl at the House of Cobwebs has a very weird British "romance" comic to discuss. I thoroughly enjoyed his dissection of Mirabelle. Here's a panel to whet your interest: 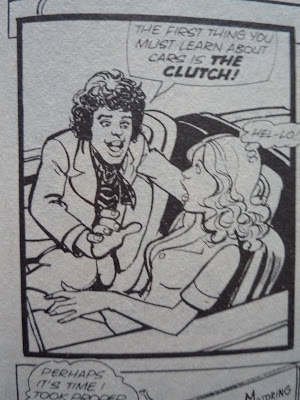 "Continuity" in the Golden Age? Yep, as I show over at Nothing But Batman, a lot of the flashback sequences in old Batman stories really were showing scenes from earlier stories.
Posted by Pat at 9:49 AM