This is something I hadn't noticed before and given that it involves DC's two most famous characters, it seems worthy of a post. For starters, consider this famed story: 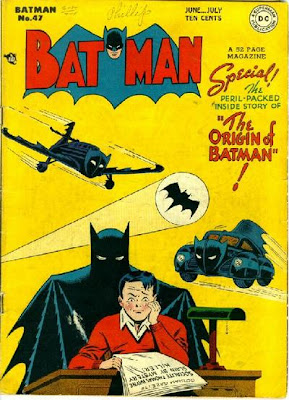 It appeared in the June-July 1948 issue of Batman. Now why was that particular date chosen? It's just a little over nine years after Batman's first appearance in Detective #27, so it's not like it's some big anniversary.

Well, not for Batman, anyway. As it happens, the comic was dated on the tenth anniversary of Action Comics #1, the first appearance of Superman. And, as you might expect, the anniversary was also celebrated over at the Man of Steel's own mag as well: 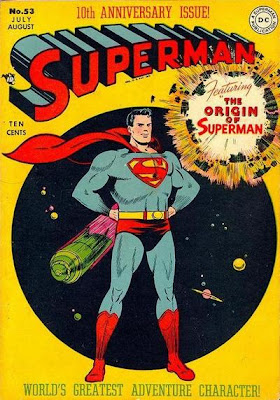 So roughly within a month of each other both Batman and Superman had their origins retold in extended forms. But that's not all the story, by any means.

In Batman #127, Professor Carter Nichols came up with an improbable new invention, which projected what a person's life might have been like had he or she not had some particular event happen. Bruce tries it out and a fantasy story ensues where his parents were not killed by Joe Chill. As it happens, they did not survive much longer, dying in a car accident a few years later, and Bruce actually becomes an indolent playboy for awhile, before an incident turns him into the Batman. I discussed this terrific story a little over a year ago.

That issue was cover dated October 1959. That very same month saw the appearance of Superman #132. Batman and Robin want to give Superman a special present for helping them out of a recent jam. They come up with this unique idea: 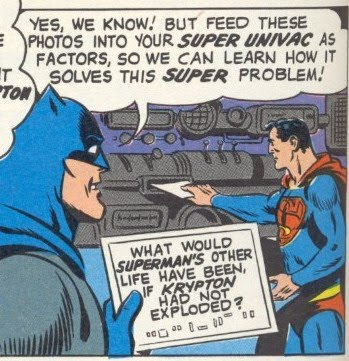 As it happens, Jor-El and Lara do not survive for long, either. Their rocket crashes on a small asteroid and: 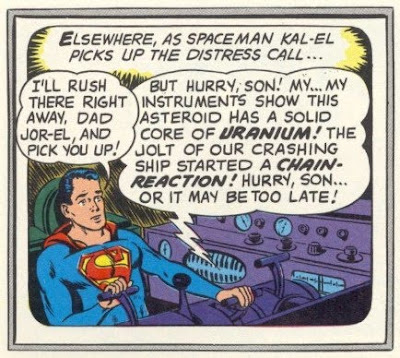 Yep, that's young Kal-El in a Superman suit; apparently the Space Patrol of Krypton would have had the same emblem had the planet survived. The asteroid explodes, killing Jor-El and Lara (and Kal's younger brother Zal-El). It's that weird DC fate working its way again. And in the end, Kal-El becomes the Superman of Krypton with the help of a ray invented by a friend: 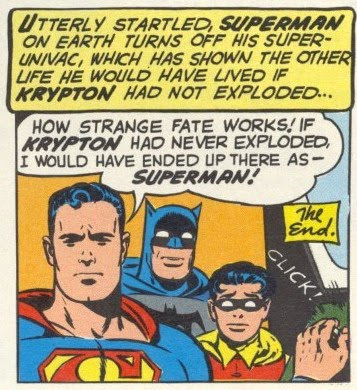 Well, once is happenstance, twice is coincidence, and the third time it's a trend. Ladies and gentlemen, we have a trend, as I have located the third example. It's not a perfect example, because the dates are a few months apart, but otherwise the pattern holds quite strongly. In Detective Comics #235, the famed story The First Batman appeared. This is one of the most-reprinted Batman stories ever, appearing in Batman Annual #4, Batman #255 and The Greatest Batman Stories Ever Told. The story shows Batman's father, Thomas Wayne, fighting crooks in much the same way that his son later would, even wearing a strikingly similar costume to Batman's: 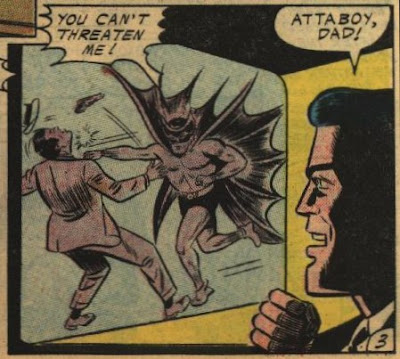 The story includes an intriguing additional detail to Batman's origin. It is revealed that one of the mobsters that Thomas Wayne defeated had vowed revenge on him. And sure enough: 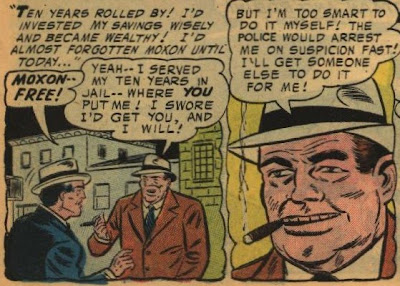 As implied, it turns out that Moxon had hired Joe Chill to kill Bruce's parents. But there's a catch; Moxon now has amnesia and doesn't remember the incident. But when Batman confronts him using his father's old costume it triggers the memory. Moxon tries to escape but is hit by a truck and dies. 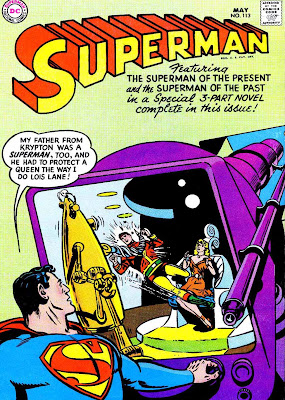 As you can see, the story involves Superman's father, Jor-El, being a Superman before Kal-El ever took on the role. Superman discovers tapes of his father describing a key event in his life. While viewing other planets, including Earth, Jor-El's favorite alien world, Jor discovers that the queen of the planet Vergo is planning to destroy Krypton. He travels to the alien world and discovers that he has super powers there, which enables him to duplicate his son's later feats and defeat the plan to destroy his home world. But, as with the Batman story in Detective #233, this tale includes a significant addition to the Superman origin: 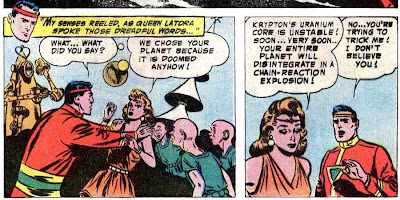 Yep, this is the moment when Jor-El first learns his planet is doomed. Queen Latora had planned to catapult Krypton into her sun, which was dying. And as it the Batman story, the ending requires Superman to provide the finale. As it happens, Queen Latora's sun has not yet succumbed, and Superman is able to gather up lots of uranium and send it into that star, saving her world.

Incidentally, the Superman #113 story has only been reprinted once, in a Pizza Hut replica edition. Jor-El's costume had not yet become the familiar green outfit with the yellow star in the center.

Note in particular that these are not swipes, which generally require an intervening passage of time. They rather appear to be intentionally synchronized stories. I'll be looking for more examples; if you know of any please mention them in the comments.
Posted by Pat at 4:44 AM