I've been reading some earlier Silver Age Superman lately and came across this rather obvious swipe. In Superman #95 the Daily Planet office has to contend with The Practical Joker. He's Poindexter Wells, a nephew of the publisher, and the title character as we see here: 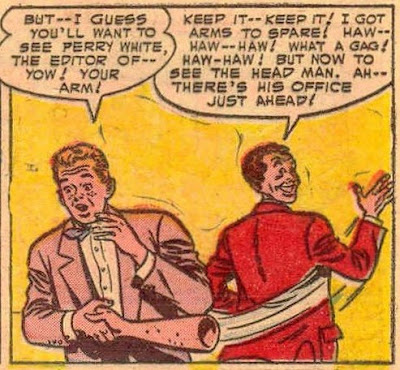 Wells goes on to give Perry White an exploding cigar, and frightens Lois with a rubber snake. Later he gives Clark a hot-foot, which causes a bit of a secret identity crisis when Kent doesn't react at first.

In Action #289, the story was dusted off as The Super-Practical Joker. This time the young man is the nephew of a major stockholder, named Dexter Willis. He pulls the fake hand joke on Jimmy Olsen, the exploding cigar on Perry and when it comes to Lois: 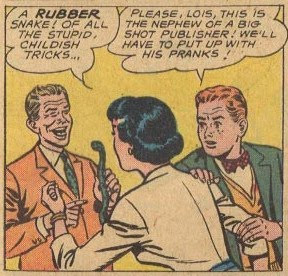 A good deal of the dialog is word for word from the original as well, which accounts for Jimmy's mistake of referring to him as a nephew of a big-shot publisher. There is a slight change in the prank he tries on Kent; this time he attempts to snip off a bit of the reporter's hair and the electric razor he's using breaks on Clark's invulnerable follicles.

In the original there is a brief sideplot about an escaped gorilla (yep, it's a DC Silver Age story), which Superman quickly subdues. But Poindexter Wells dresses up in a gorilla outfit to scare Lois and Jimmy.

Later, someone calls Wells and lets him know that hitmen from the Avenue 10 mob are going to rub out Kent. He dresses up in Kent's outfit and lets them kidnap him instead, but Lois is caught up as well. Superman saves Lois but the crooks get away with Wells. Fortunately, they had handcuffed the practical joker's fake arm, and by grabbing his toy gun, he was able to turn the tables on the gang. But when he shows off the gun: 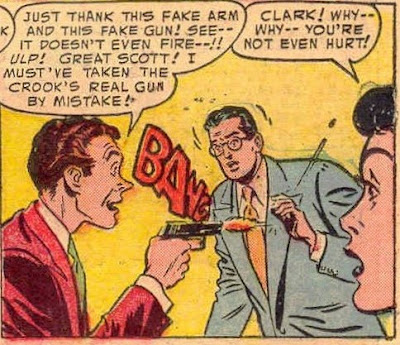 Clark shows Lois and Poindexter that he was wearing bullet-proof armor, even on his ankles, which accounts for him not feeling the hot-foot earlier, and the practical joker swears off his gags forever.

In the swipe? Yep, there's an escaped gorilla, which Dexter dresses up as to scare Jimmy: 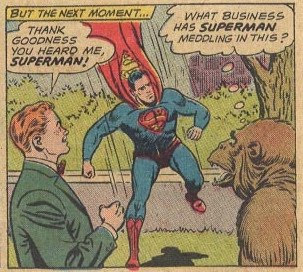 The Avenue Ten mobsters kidnap Clark and the practical joker, but Dexter's got on his fake arm and slips the rope they used to tie him up. As they battle the mobsters, one of them conks Kent on the head, but it doesn't affect him. Clark explains: 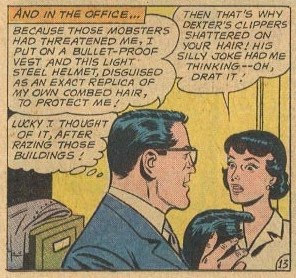 So as you can see, the swipe is virtually complete. Oh, there are a few changes; in the original Jimmy convinces Poindexter that Perry has a heart condition and this causes him to repent his gags, while in the swipe Dexter falls victim to some Superman pranks, giving him empathy for his victims.

Weisinger reportedly believed that his readership turned over every seven years or so, and these stories fit that belief, as the first version was published in February 1955 and the swipe in June 1962.

Since we're on the topic of Action #289, let me mention that Silver Age Gold had a review of the rather creepy Supergirl story in that issue just the other day.
Posted by Pat at 5:08 AM