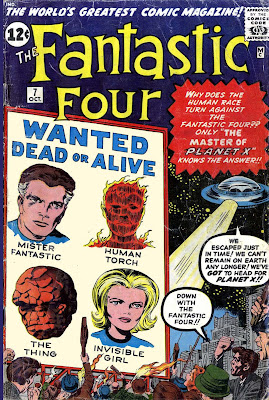 Looks a little similar to the theme of the Skrulls issue (#2), doesn't it? But in fact the story is quite a bit different. We learn that Planet X is doomed, as an asteroid is about to hit it. Kurrgo, the ruler of that doomed world, sends a ship to Earth to bring back the Fantastic Four.

Meanwhile, the FF is about to make a trip to Washington for some honor or other. We get the inevitable griping from Ben and Johnny: 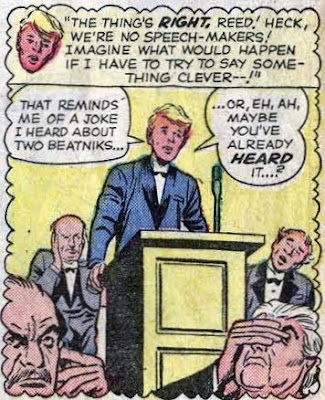 And when they arrive, the politicians and the people turn against them violently, influenced by a hate ray beamed by the robot that piloted Kurrgo's ship. The FF head back to their headquarters, where they encounter the robot.

Of course, a reasonable person might notice that all this is so much padding on the story. Why did the FF have to go to Washington? Why didn't the robot just come to their office, beam the hate ray, and then demand that the FF join him (as he now does)? 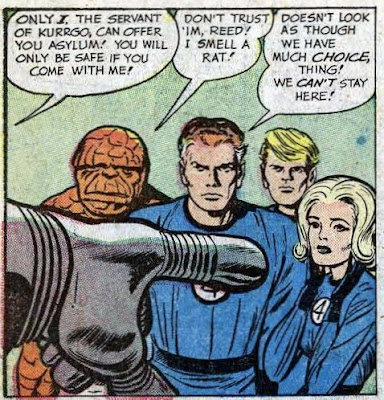 They go to Planet X, where Reed wonders why they don't just get on another space ship. Kurrgo explains: 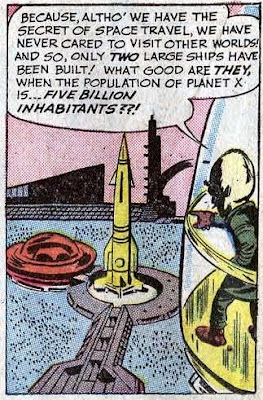 We also learn that Kurrgo is not a benevolent ruler: 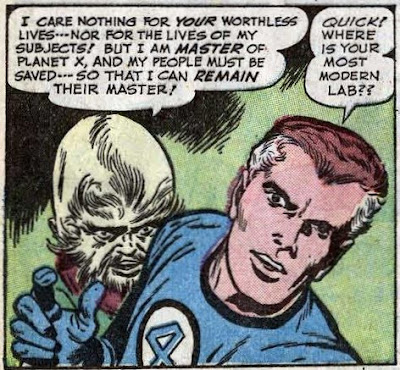 Reed comes up with the solution: A gas which shrinks everybody on the planet to a much smaller size. Thus, they can all fit on the ship, travel to and colonize another world and be restored to their normal size by an enlarging gas. Satisfied, Kurrgo lets the FF escape on the second rocket. But (as you might expect) Kurrgo lets his imagination get the best of him: 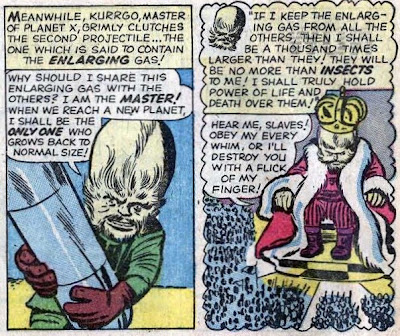 Weighed down by the heavy gas capsule, Kurrgo is unable to make it to the space ship before it takes off, and dies with Planet X. Reed lets the rest of the FF in on a little secret: 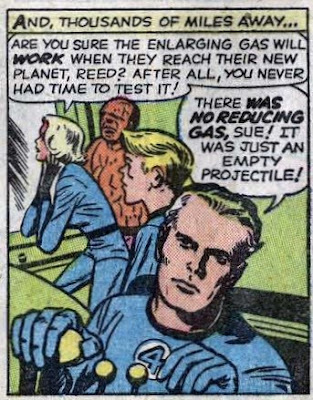 Obviously that's an error; what he means to say is that there was no enlarging gas.

Comments: This one seems like a throwback to the Atlas era, with aliens with strange names (which always include at least one repeated letter) menacing the protagonist. The story is extremely padded, which is why the synopsis is relatively short. I do like the irony at the end of Kurrgo being doomed by his own megalomania. But the FF was still pretty much hit or miss at this point, and I give this one a miss.