The last post took us up through Tales of Suspense #64, so we'll pick up with #65. This is a battle between the old Iron Man and the new Iron Man, as a crook manages to steal Tony Stark's new armor, forcing him back into the old suit.

After another one-off against Sub-Mariner foe Attuma, Tony faces the former Count Nefaria, known now as the Dream-Maker, because he can project his enemies into dangerous nightmares, like this one: 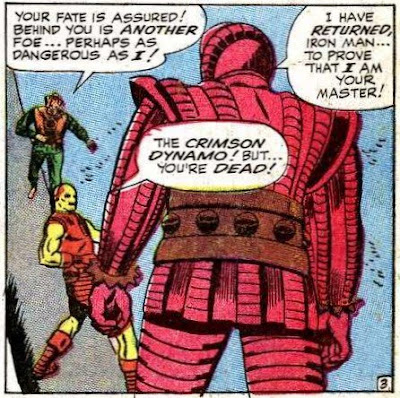 His dreams can be deadly as well. So Iron Man faces a gantlet of many of his old foes, even Gargantus, the robot from outer space. In the next issue, Count Nefaria blackmails Tony's ne'er-do-well cousin Morgan into attempting to drive Stark mad with hallucinations, but Iron Man again saves the day.

ToS #69 begins a longer tale involving another communist version of Iron Man, this time called Titanium Man. His origin is very similar to the Crimson Dynamo; he's an aggressive communist who dreams of taking over the reins of the Soviet Union after defeating Iron Man. He issues a challenge for a battle in a neutral country, to be televised worldwide. Tony's initially reluctant as his heart's been giving him problems, but Senator Byrd puts pressure on his to accept the challenge.

One oddity; Tony agrees to go along to the foreign country, bringing Happy and Pepper with him. But this seems to be a boneheaded mistake as they of course spend a good deal of time while watching the battle remarking on how Tony's not around to see the main event.

Iron Man soon realizes that he needs more power to defeat the Titanium Man. There's a transistor back at his hotel room, where he quickly flees after the first round of the battle is over. Unfortunately, an old flame named the Countess has stolen it from him: 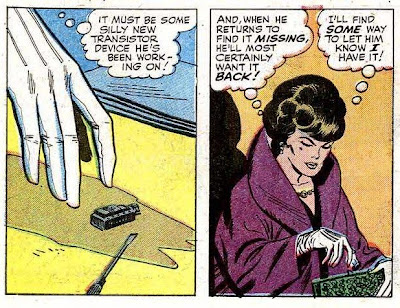 Iron Man tells Happy Hogan to track down the Countess and get back the transistor. He does so, but not before the battle begins again. Happy is not willing to wait for the round to end, so he ventures onto the battlefield and gets hit by a ricochet. 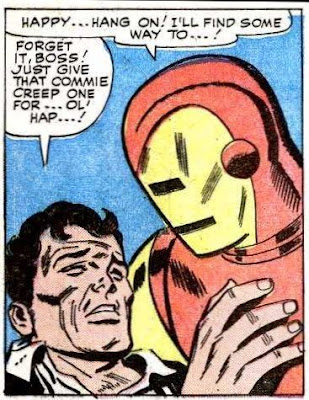 As you can see, he's also figured out that Tony Stark is Iron Man. With the extra transistor power he makes short work of Titanium Man. Meanwhile Happy is undergoing emergency surgery and (not surprising), Pepper's quite frosted that Tony is not there to maintain a vigil at his side (as he has to recharge after the battle).

This creates an oddball situation in that now Pepper respects Iron Man, but not Tony Stark, especially when he explains his absence: 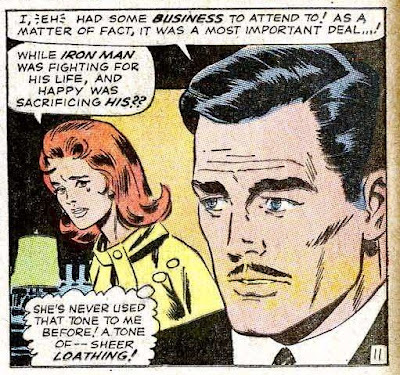