I'll pick back up with Tales of Suspense #72, which is a one-off story featuring the Mad Thinker (a whiz at predicting the future) and his giant android. Senator Byrd is demanding that Stark reveal Shellhead's true identity, because Iron Man's armor is valuable to the government as a weapon.

This gives the Countess, whose advances Stark spurned, an idea of how to get back at him. She approaches the Mad Thinker, who agrees to solve the riddle of Iron Man's true identity. His android kidnaps Stark, who only gets away because the Thinker mistakenly opens Tony's briefcase: 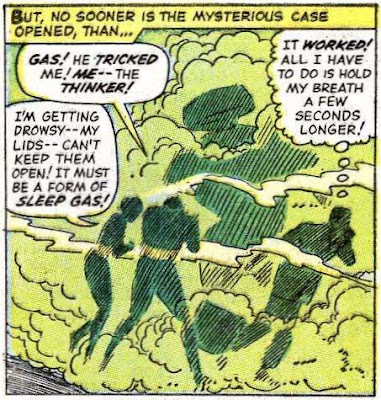 Thus allowing Tony to switch into Iron Man's uniform and defeat the android.

The next issue returns to the subplot of Happy's near-death at the hands of the Crimson Dynamo in #71. Happy's been kidnapped from the hospital, and the only clue is a hoofprint on the windowsill (three stories up). Iron Man naturally comes to the conclusion that the Black Knight must be to blame (especially since he kidnapped Happy in an earlier story as well). He tracks the BK down and defeats him. BTW, here's a classic Stan Lee cliche`:

I only intended for you to die, not me! Incidentally, this issue introduces a longtime artist on the feature, Adam Austin. Say what? Adam Austin? I assume that Gene Colan was using a pseudonym for some reason because you can see this is his work: 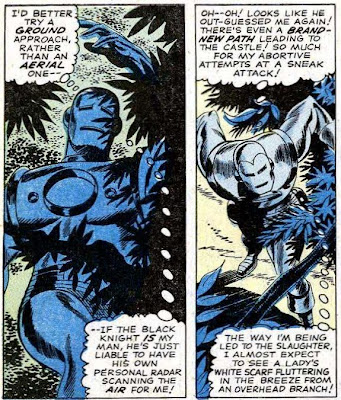 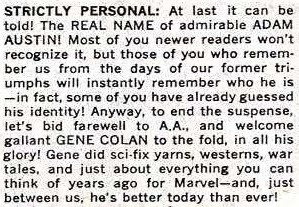 After calling for an ambulance for Happy, Iron Man collapses. He manages to contact Pepper, who drives to the Black Knight's castle and recharges him from the car battery. We see that at this point Pepper's in love with Iron Man (and despises Tony Stark). Poor Happy, he's always the backup!

When Iron Man gets to the hospital, he learns that Happy has indeed been changed into a freak, a mindless but powerful opponent. And unfortunately, IM didn't fully charge, so he's weak. He tries to lure the Freak back to Stark's plant, but runs out of power at the gate. The Freak continues on, searching for Pepper, who's in a meeting with Senator Byrd. Although the Senator has been portrayed as something of a weasel in the past, he shows courage here: 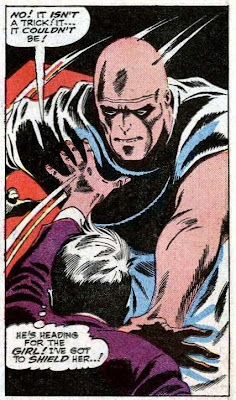 The Freak carries Pepper to the window, where he appears ready to jump. The police reason that if they shoot him, he might fall backward into the building, but he doesn't; instead he drops Pepper. Fortunately Iron Man has just enough charge left to save her with his repulser ray. He manages to convert Happy back into a normal human being, but his buddy has suffered the convenient memory loss that afflicted almost anybody in the Silver Age who learned the secret identity of a hero.

Senator Byrd demands that Stark come back to Washington with him immediately. But as they are being driven towards the capital, the Mandarin teleports Stark into his castle. This infuriates the senator who orders Stark's plants shut down. Meanwhile, the Mandarin is showing Stark his latest evil genius creation, a giant android called Ultimo who shoots laser beams from his eyes. But Stark angers the Mandarin, who blasts him from his sight, assuming he has killed Tony. Due to his chest plate, he survives and is able to recover his briefcase and change into Iron Man. He manages to defeat Ultimo by conning the android into shooting at a critical place, unleashing the force of a volcano.

But when he returns to the US, Tony's got nowhere to turn to with his factories closed and a warrant out for his arrest. Which seems like a good breaking point.

Comments: By this point, Iron Man was hitting on all cylinders. Lots of subplots, lots of interesting characterization, excellent villains and oh, that Colan artwork! If the series has a significant negative, it's that Stan falls back a little too often on the "undercharged transistors" excuse. This is very similar to the "Odin reduces Thor's powers as punishment" theme that was common in Journey into Mystery at the time. Having created these incredibly powered superheroes, Stan found it tough to put them into serious danger.
Posted by Pat at 9:40 AM