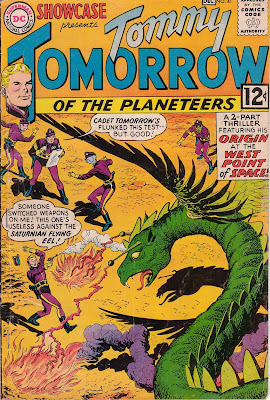 DC had good success relaunching some of their Golden Age superhero characters in the early 1960s, so it was only natural that they'd try the same treatment with some of their sci-fi heroes as well.

Tommy Tomorrow debuted in 1947 in the pages of Real Fact Comics #6, which at least puts in doubt the trustworthiness of the title, because of course his adventures were completely fictional. After a few appearances in that magazine, Tommy got a big break, being promoted to Action Comics with #127. I'd have to look around to be sure, but I believe that he replaced Hayfoot Henry.

At any rate, TT held down the fort at Action for a long time indeed, finally being bumped to make room for Supergirl in Action #252. Ironically, for most of his run, Tommy Tomorrow was drawn by the man who would go on to fame as Supergirl's first major artist, Jim Mooney.

Tommy moved over to World's Finest with issue #102 and lasted for another 23 adventures ending in #124; Aquaman coming over from Detective bumped him, and for the first time in 15 years TT had no home in the DC Universe.

The story begins as Tommy is a lowly cadet at Planeteer Academy, the West Point of the Solar System. In an early test, Tommy apparently pulls out the wrong gun by accident when facing the dragonlike creature shown on the cover. But he later discovers that he was "accidentally" issued two of the same gun, and none of the one he needed. Tommy also meets Lon Vurian, the spoiled son of the commander of the Venusian forces.

In another test, Tommy mistakenly takes water rather than forasic acid into a test chamber. Or did he? 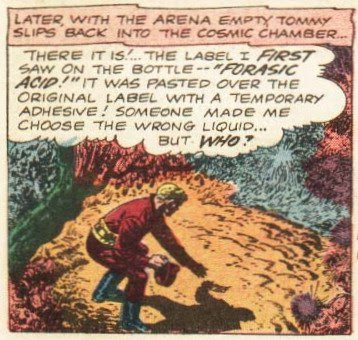 One night, Tommy observes Vurian fiddling with Tommy's controller for a test the following day. But when he accuses the young Venusian, he's embarrassed as the techs test the controls and discover them to have been recently repaired but working fine.

Despite those errors, Tommy is tied with Vurian at the end of the semester for best student. It will all come down to a war game, with the two young men in charge of their respective teams. But there is a revolt in the ranks: 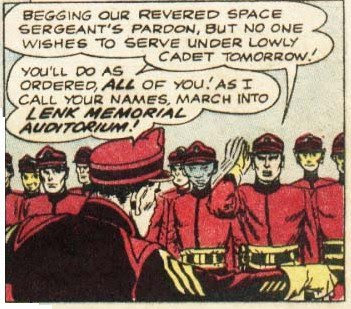 After they land on an asteroid tasked to locate a powerful gem, Tomorrow's men mutter sarcastically that he has probably already sabotaged the other team. Sure enough Vurian's directional finder isn't working. Meanwhile Tommy's team has encountered another problem: 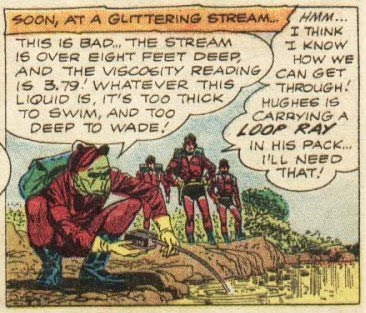 But the young cadet figures out that he can use the local version of giraffes to cross the stream. Meanwhile the Blue team has prepared an obstacle for Tommy's men. They broadcast them about the directional finder, which is the last straw for the Red team, who now refuse to help TT. But Tommy is determined to succeed and eventually he breaks into the chamber where the gem was being held, only to discover Vurian entering from the other side, and the gem missing.

It turns out that Lo Duey, a Martian cadet had been sabotaging both teams, with his goal to steal the powerful gem. He blasts off before the cadets can get back to the ship, but he does cause Tommy and Lon Vurian to join forces: 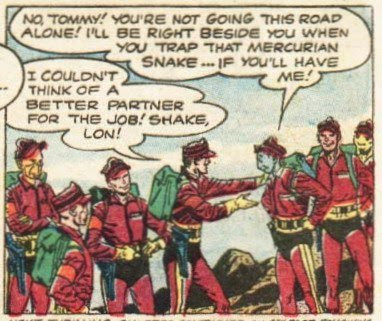 The gem grants its owner invulnerability when the gem is exposed to the sun. They track down Lo Duey and almost catch him when the sun goes down on a planet where he's stealing something from a hydrogen generator plant. Unfortunately, it looks like Lon Vurian gets killed: 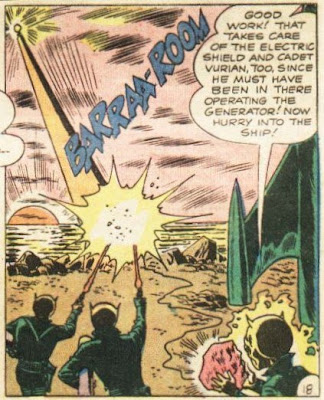 Lo Duey's plan is to create two miniature suns orbiting around Venus so that his powers will work permanently. But Tommy Tomorrow has figured out a plan to get rid of the suns:

And Lon survived the collapse of the lighthouse, so it's a happy ending all around.

Comments: I really like the story in this one, particularly the part where they stop to check the viscosity of the stream. I guessed that Lo Duey was the real villain early on, although mostly it was the usual "Okay, they introduce this guy early on and then don't do anything with him for the next 11 pages, so he must secretly be the baddie." Lee Elias provides the art, in a style very reminiscent of Milt Caniff. About the only major negative to the story is that there are no women; the Planeteers apppears to be a males-only bastion.
Posted by Pat at 8:03 AM