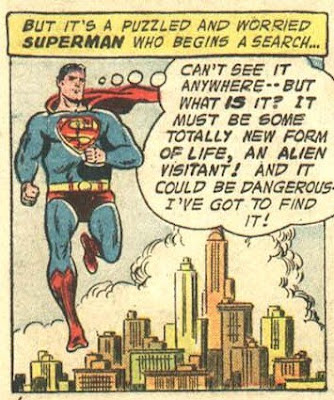 I've mentioned in the past my biggest criticism of Wayne Boring; the man simply could not put eyeglasses on the nose of Clark Kent to save his life. But Boring was a terrific artist in many other respects, and this is one of them. Boring realized that if Superman wasn't flying simply by jumping from place to place, then there was no earthly reason for his feet to be trailing behind him. So he often made Superman look like he was out for a leisurely stroll in the park, which I always thought was pretty cool.

I keep recommending Sequential Crush, because Jacque keeps coming up with interesting posts. I was particularly interested in her post on men's belted sweaters, an apparent fashion trend of the early 1970s that I completely missed. But she's got the evidence!

Of course my idea for Neat Stuff is a ripoff of Mark Engblom's Random Coolness, and as it happens he's got a post up on that topic covering the Cosmic Treadmill, Kirby Krackle and Peter Parker's Pessimism.

Ol' Groove's got a tribute to the covers of John Buscema. And a Batman fan like me can't resist his coverage of Marshall Rogers' all-too-brief stint on Batman in Detective Comics.

Bill Jourdain covers Jules Feiffer's groundbreaking reprint book, the Great Comic Book Superheroes. I remember reading that book in the late 1960s at the Ridgewood Library; I was most impressed with the Plastic Man story from Police Comics #1 and was disappointed in the Spirit story (a 1941 tale, while most of Eisner's legendary stuff was after the war. But as he notes, it was definitely the first exposure for many young comics fans to a significant number of Golden Age stories.

Dave Olbrich has a long post up about the proposed casting for the Johnny Quest movie. I remember being completely jazzed by the show back in the 1960s, with kids having great adventures with frequent sci-fi themes. Remember the lizardmen?
Posted by Pat at 4:53 PM