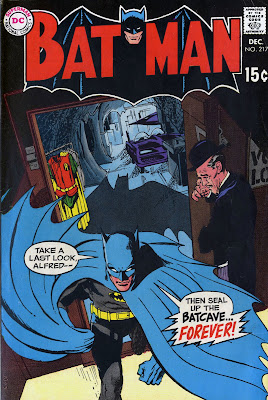 Or, farewell to all that. Most of the time, these covers turned out to be just teases, and you knew by the end of the story that all will be back to normal. Just two issues earlier the cover had depicted Batman blowing Wayne Manor to smithereens; needless to say, that didn't actually happen. But this really was the end of the Batcave for all intents and purposes, and thus this is a significant story.

And that's not the most important ending in this issue. Dick (Robin) Grayson had been around as Bruce (Batman) Wayne's crime-fighting partner since 1940, when he appeared to be a lad of about 10. But if the clock ticks a little slower in the comic universe than in our world, it ticks remorselessly:

His fashion sense leaves a little to be desired, but obviously he loves his new university (Hudson U, to be specific), and is thrilled at the thought of beginning this new phase of his life (which would include solo adventures as Robin in Detective Comics), while Bruce and Alfred contemplate life without him. This was effectively the end of the Bruce/Dick partnership; although they have worked together on many occasions since, it was always on an ad hoc basis. As I presume most of you know, Dick grew into adulthood and became Nightwing, and there have been two (or more) new Robins since, and at this point Dick is the most likely candidate to become Batman in the Battle for the Cowl while Bruce is thought dead although he's really alive back in the caveman era.

But all that was in the unknown future at the time. One rather jarring note that the story is indeed set in 1969:

I don't even know if they have draft cards these days; you still have to register even though the last draft was held in 1972. Dick tears up a bit as the cab drives him away, and suddenly Batman is on his own again as he was in 1939. Bruce decides that it's time to close up old Wayne Manor, and move into new digs:

The first time that building was shown, I believe. Quick trivia: What was the original name of the Wayne Foundation? Answer at end. By the way, the building was remodeled later to house an atrium with an enormous tree, which featured in innumerable "establishing shots" later. It looked neat, but the commercial real estate analyst in me has to question the amount of rentable area lost.

This is not what the Wayne Foundation became, but it's an interesting start as it gives Bruce Wayne an excuse to look into crime from his real identity. Bruce starts, not terribly coincidentally, with the shooting death of a doctor (like his own father's murder). Jonah Fielding was killed after treating a hoodlum who had been shot. Unfortunately, his wife did not see the crook, but she knows that he had been wounded in an extremity, and yet he wasn't limping so they know to look for a man with his arm in a sling.

So Batman baits a trap for the killer, letting it be known in his "Matches Malone" identity that the doctor's wife was going to tell all to the police. Unfortunately, his deductions turn out to be wrong, as the real killer was the man who originally shot the victim the doctor was treating. Batman manages to save the wife of the doctor by taking a bullet intended for her. Oddly, the story ends with Batman deducing who the real killer was, but the police end up picking him up.

Comments: Some poignant moments at the beginning, with excellent characterization for Bruce, Alfred and Dick. It was cool to see more of the personal side of their lives for a change. Bruce muses about how messy Dick is (apparently messy means leaving a shoe visible underneath a well-made bed). It was very cool to read this back then as I was approaching college age myself. The story is good, although even as I read it I wondered if Batman wasn't assuming too quickly that the killer was the guy the doctor treated. Excellent art by Irv Novick.

Quick Trivia answer: The Wayne Foundation was originally named the Alfred Foundation. As I discussed last year, Alfred was apparently killed in Detective #328, giving Bruce the inspiration to create a foundation in his honor. After Alfred returned from the dead in the Outsider series, Bruce renamed the charity for his parents.

BTW, sorry for the lack of posts in the last week or so. I have been battling a back injury that made it uncomfortable to sit at my desk, although things seem to be returning to normal.
Posted by Pat at 8:59 PM