The Life of Pie, Part I

I have mentioned the character Pieface in Green Lantern before and always intended to get around to doing a couple of posts on him. At first blush he appears to be one of those racially insensitive (to our modern eyes) comedic characters, like The Spirit's Ebony, or Blackhawk's Chop-Chop.

But he was never really played that way despite the unfortunate nickname. And he has a pretty interesting history, so I thought I'd put together a post or two on Thomas Kalmaku, also known as Pieface.

He did not appear in the initial tryout run for Green Lantern (Showcase #22-24). That series featured Hal/GL and Carol Ferris. In Green Lantern #1, Julius Schwartz published an interesting (and slightly longer than shown) letter from a young man in Missouri:

Is this Roy Thomas' first created character? What do you know, in Green Lantern #2, a mechanic and confidant appears. We learn that Hal's mechanic, Thomas Kalmaku, is planning to resign from Ferris Aircraft. Hal goes off to try to convince him to stay on and: 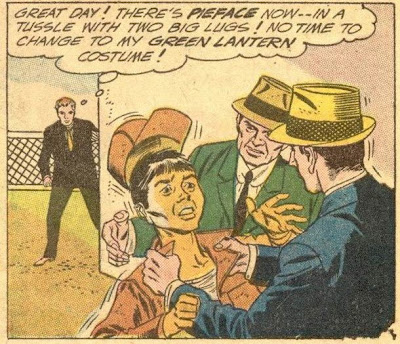 But Pie convinces Hal to stop when the guys run off. We learn that his father had discovered a great gold mine with a partner and they had split up a map to the fabulous treasure. But his father passed away (leaving his half of the map to Thomas) and the partner had not returned, which was why Pie was in the lower 48 to begin with.

Then Pie realizes that he's missing his piece of the map, obviously stolen by the crooks whom he bumped into. Fortunately, GL, who arrives after a convenient absence by Hal, can reconstruct it: 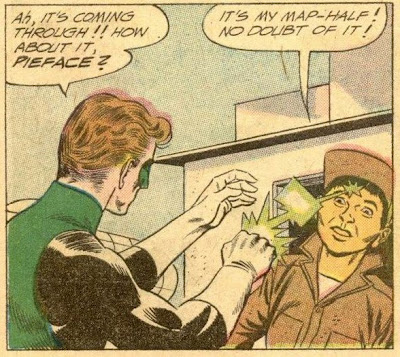 This is a cool and credible use of the Power Ring. GL and Pie resolve to pursue the treasure with only half the map. They come to a deserted mining town that turns out to not be quite as deserted as advertised. And in the heat of battle, Pie notices something:

Non-superheroes in the DC Universe who knew that a particular superhero had a particular secret identity at this time: Alfred. Now it is true that at times somebody had discovered a superhero's secret identity during a story, but traditionally those stories always ended with the discoverer either convinced that he'd been wrong, suffering from amnesia, or dead. Not here: 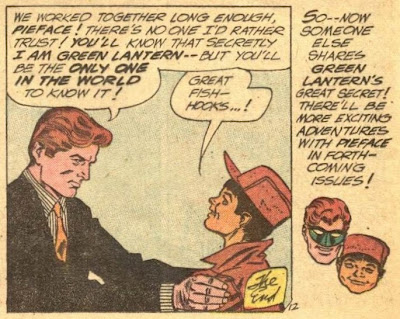 And having found the mine which will keep his people comfortable, Pieface is free to go on being Hal's mechanic.

In Green Lantern #3, Pieface plays a crucial if somewhat unbelievable role in the opening story. GL's power lamp is stolen, but Pieface happens to be adjusting his landlady's TV antenna and intercepts a broadcast from the thieves to their home world of Qward: 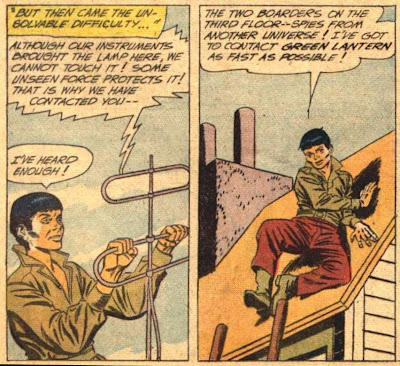 What are the odds that the only person on Earth who knows Green Lantern's secret identity would be the one to intercept that transmission?

In GL #4 Pieface makes a heroic effort to save his buddy:

He becomes poisoned by radiation and GL must visit the evil universe of Qward again to save him.

In GL #5, Pie got some pretty singular honors. His first cover appearance, for starters: 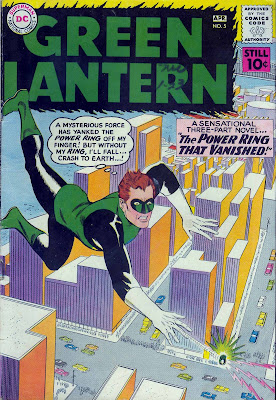 That's not Hal Jordan, but Tom Kalmaku in that spandex as we learn later: 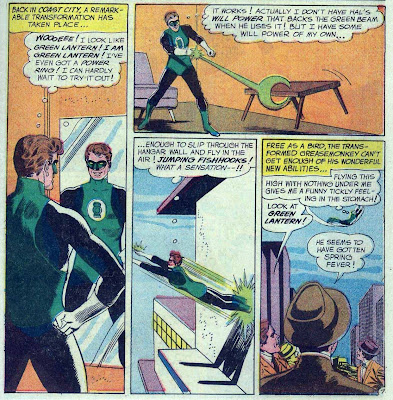 Of course, the enjoyment of that moment is somewhat counterbalanced by this scene: 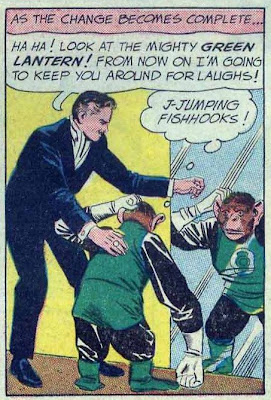 And a chimp is not the only animal poor Pie is turned into, for in the very next issue:

So if anybody asks you who was turned into a chimp and a seagull in consecutive issues of a DC comic, you know the answer: 3.14161....

The story itself sounds pretty gripping; an airliner under control of a gang of hijackers with both Hal, and Pie's childhood sweetheart Terga aboard. Unfortunately, GL conks himself out and so Pie, the bird, must crash into one of the plane's windows, survive, and... okay, we've established that the plot is a little shaky.

With Pie's considerable assistance, GL subdues the hijackers and eventually returns his Eskimo buddy back to normal. And we see that he and Terga are quite smitten with each other: 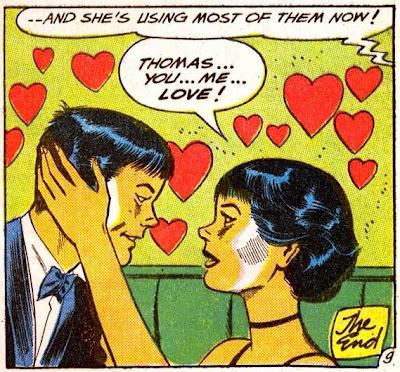 This seems like a good breaking point.
Posted by Pat at 6:30 AM