My previous post on the Iron Man run in Tales of Suspense took us up to issue #49.

In #50, we get the first meeting of Iron Man with one of his principal enemies; the Mandarin. We also get the first look at the new Pepper: 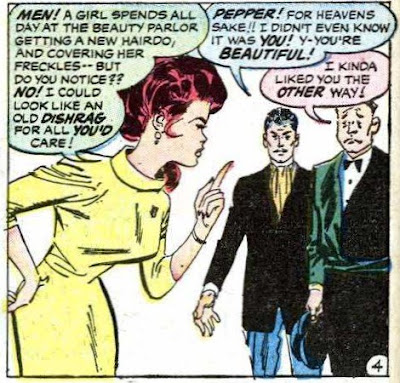 And of course, at this point, Tony starts doing the classic Marvel, "If only I dared tell her that I love her," bit. Meh. At least Happy's reaction shows that he cares for the real Pepper. And as the series develops, Pepper gets less and less antagonistic towards Happy, and even begins dating him, although at first it seems mostly a ploy to try to make Tony jealous.

One other oddity of the series around then. It seems like anytime Stark had to go someplace, Pepper would ask if she could come along, but Tony would say no, then Happy would ask which car he should drive and Tony'd say, I'm driving. And yet, these two remained extremely loyal to Stark.

During a brief period where Iron Man is forced to keep his entire uniform on to prevent dying of a heart attack, Stark leaves orders that Iron Man is to be in charge during his absence. This leads to some weird scenes like this: 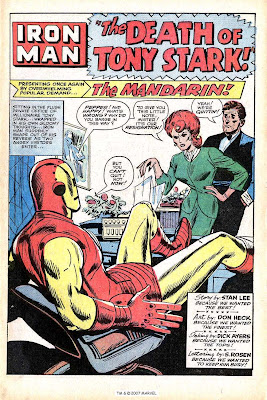 You don't see a superhero in full costume sitting behind a desk with his feet up very often. We also get quite a bit less of the Tony Stark, international playboy routine around then. It really never made much sense; how frisky can you get with a metal chestplate under your shirt?

The hit or miss quality to the villains continues. The Scarecrow, from ToS #51 is definitely a miss; he's a former "rubber man" in a sideshow who takes up crime with the aid of some trained crows. On the other hand, ToS#52 introduces the Black Widow, a long-running and terrific villainess who later became a heroine. The Unicorn makes his first appearance in #56, while Hawkeye debuts in #57. 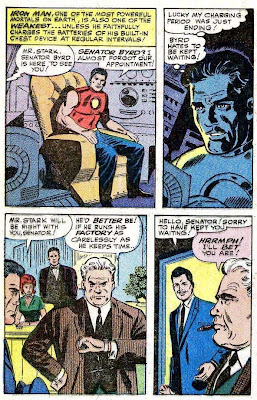 Senator Byrd? Now as it happens, there was a Senator Byrd at the time the story was written, and he's still there (in fact he's the longest-serving senator in US history). Byrd first appeared in ToS #46 as an unnamed senator.

Overall, this is a strong era for the character, with some excellent villains and some interesting plots. Don Heck's artwork, while never of the quality of Marvel's two star artists (Kirby and Ditko) is capable; I particularly like this splash: 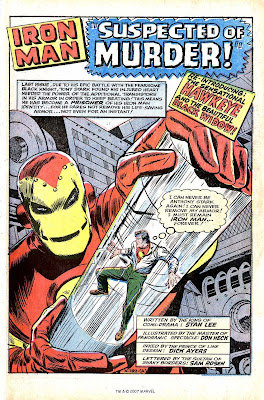