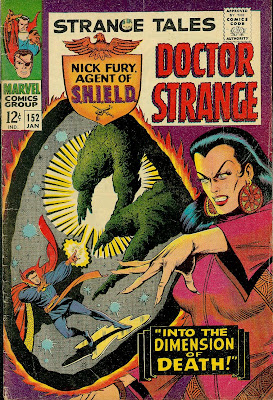 Strange Tales by this time was shared by Nick Fury, Agent of Shield and Dr. Strange. The opening story features the former, and is a continuation. Fury had escaped from Hydra in the previous episode, but realized too late that Hydra intended for him to get away. His ship's radio did not work and thus Shield's men may shoot him down. He avoids that trap by flying upside down and wiggling his wings; an international distress signal. But he also realizes that his plane is carrying the Overkill Horn, which will explode every atomic pile on Earth when it sounds, so he can't relax just yet.

The layouts are by Kirby but the pencils are by Steranko, in his second issue. 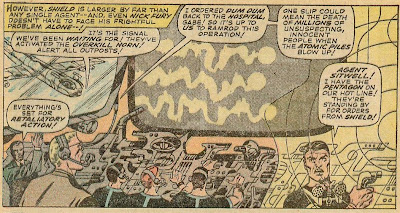 Sitwell orders that something called the Strato-Mine be launched, even though it will probably kill Fury. Meanwhile at Hydra: 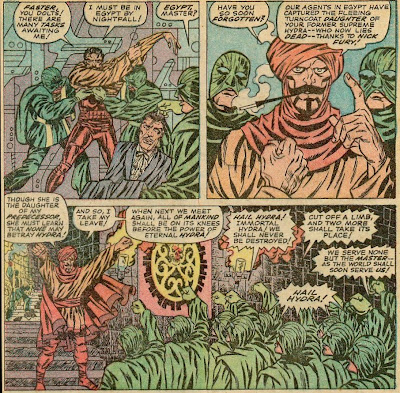 You can see Kirby's influence in there, but the inks are all Steranko. Anyway, Fury aims the plane at Hydra's base, bails out over water and is rescued by a Shield submarine. The Strato-Mine zeros in on the horn and destroys it and the Hydra base.

But the job isn't over yet; Fury's gotta rescue the daughter of the former Supreme Hydra, which he accomplishes with the help of another gimmick: the Electro-Spear, which makes the enemy's weapons too hot to handle. There's a cute little gag at the end as Sitwell celebrates his successful stint as temporary head of Shield: 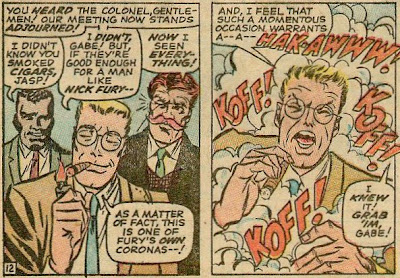 Comments: Entertaining little story with the usual overload of gadgetry. Steranko was just getting started with his extremely influential run; there are only hints of the psychedelic work that was to come.

The second story introduces Umar, the sister of Dormammu. As you can see, there isn't much of a family resemblance: 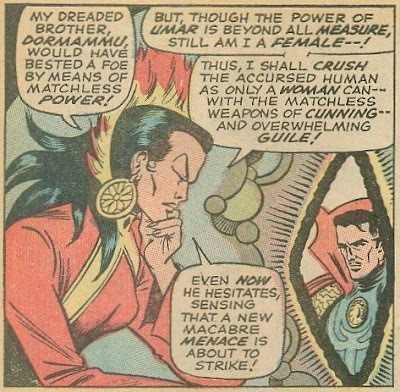 In fact, she looks more like the Sub-Mariner, which may be because the art is by Bill Everett (Subby's original creator back in the Golden Age). She explains why she has called Dr Strange to Dormammu's former dimension: 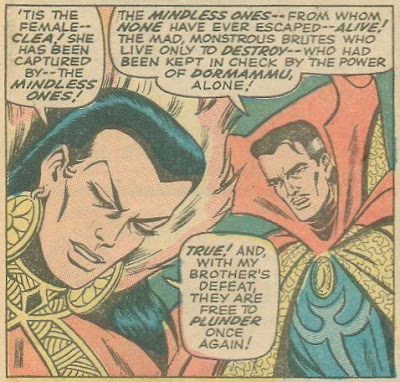 Dr Strange is not fooled by her friendly demeanor; he knows that she's got something planned, but with Clea in danger he cannot avoid facing the Mindless Ones.

Comments: Everett does a decent faux-Ditko in this issue. While the concept of a sister of Dormammu is interesting and works, the story itself seems padded as we wait for Dr Strange to fight his way to her chambers.

A note: These Marvel anthlogy mags really don't work well for the single-issue review concept, especially after about 1965, when Stan started writing more serial stories. I think from now on I'm going to tackle them more like I have been with the Iron Man series lately. Thoughts?
Posted by Pat at 12:52 AM