Of all the characters in the Batman Family, it is safe to say that the two which draw the most scorn from the fans are Bat-Mite and Ace, the Bathound. I am not going to deny that some of that scorn is well-deserved. Both characters had their grating moments, and neither was really missed when they disappeared from the Batman family in 1964.

But... Ace was really much more of an important character in Batman than even I realized until I started to check out his adventures. Remember, this was at the time that Lassie was a major TV star. DC had a comic book during the 1950s called The Adventures of Rex, the Wonder Dog; it lasted for 46 issues and over 7 years.

Ace, the Bathound appeared in 15 different stories. He appeared on the covers of Batman #92, #97, #103, #123, #133, 143, 158, as well as Detective #254. It's pretty safe to say that Bathound appeared on more Batman covers than any other character than Batman, Robin, Batwoman and the Joker during the entire Silver Age; he'd probably appeared on more covers than stalwarts like Commissioner Gordon and Alfred had in their entire histories to that point. No, he's not as important a character as either of those men, but there's strong evidence that DC thought he could sell comics better than they could.

Ace first appears in Batman #92, June 1955. An aside: Superboy/Superman's dog Krypto had debuted in the March 1955 issue of Adventure, so both of DC's main characters added dogs to their families within a few months of each other. In the story, Ace is needed to track down his owner, an engraver named John Wilker who has been kidnapped by forgers who plan to use him to create bonds. At one point, Ace rescues Batman and Robin from captivity, and at the end of the case they express hope that he will help them out again sometime.

Batman #97 features The Return of the Bathound. Discovering that a criminal mob is using a highly trained dog to commit crimes, Batman borrows Bathound from its master in order to assist on the case. In this story and the following one, Ace's mask is colored blue and black, much like Batman's cowl, but usually it's just plain black.

In Batman #103, Ace becomes a movie star. He and Batman and Robin are recruited for a Hollywood movie in return for a large donation to charity. What they don't know is that the prop man is secretly an escaped convict looking to get revenge on Batman. Fortunately Ace recognizes the man's scent and they capture him.

Ace helps track down a missing high explosive in Detective #254's One Ounce of Doom. In typical Bathound fashion, he saves Batman as shown on the cover: 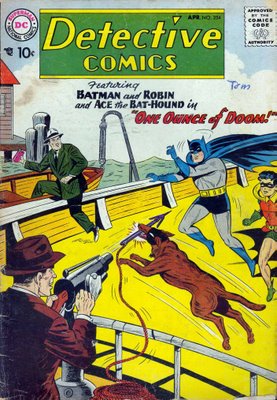 In Batman #123, Batman is a fugitive from justice, being pursued by Robin and Ace. Of course, in typical Silver Age fashion, it's all to fool some crooks into accepting Batman as one of them. Ace helps by preventing one crook from getting a shot off at Batman.

In Batman #125, DC finally got rid of Ace's former owner altogether; at this time John Wilker had probably appeared in more Batman stories than anybody other than Commissioner Gordon, Robin, Alfred, Professor Nichols, and the villains and girlfriends/love interests.

Ace's new role in Batman's life is reflected in some changes: 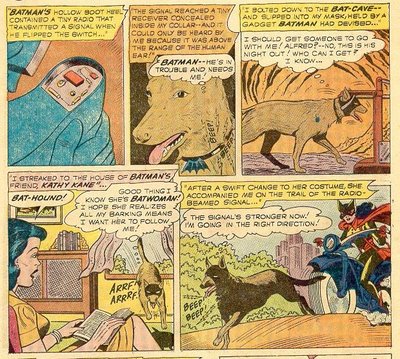 He leads Batwoman to Batman and Robin, saving them. Later, while chasing the villain of the story, he's confronted by a challenge: 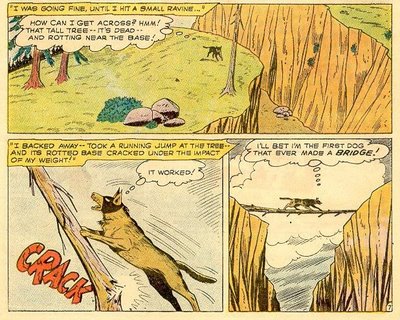 In Batman #133, Ace is featured on the cover, but his role is mostly a cameo. Batmite falls in love with Batwoman and decides to help out her career. Unfortunately, as always Batmite finds it unsatisfying when his hero seems likely to win too easily, and so to make things fun, he shrinks them and the crooks down so that normal-sized props seem enormous (an interesting twist on the traditional Batman stories where Batman's normal sized and the props are huge). However, he didn't shrink Ace, who proves the difference in the fight.

In Batman #143, Bathound saves an alien, and it then saves Batman and Robin.

Ace gets a good workout in Batman #152's Formula for Doom. First he is specifically called for over police radio, the first (and perhaps only) time I can recall this happening: 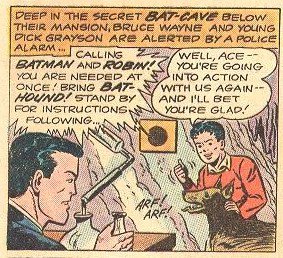 Of course, the old Batsignal wouldn't have done much good as far as telling Batman that Ace was needed too. Ace saves Robin from being separated from his legs: 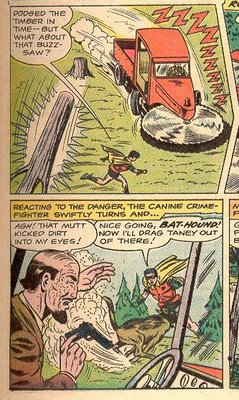 Ace had a starring role in Batman #158's Ace--The Super Bathound. Batmite turns Ace into Krypto for a story, but somehow coal gas interacts with Ace's power and makes him susceptible to control by crooks, so his super powers must be given up.

Ace had a cameo appearance in Batman #162.

(Note: I'd like to acknowledge the use of The Encyclopedia of Comic Book Heroes Vol 1, Batman, by Michael Fleisher, as a source of information on appearances and background of Ace, the Bathound. This is the premier source of information about Batman prior to about 1966, and a terrific read if you can find it.)

Previous Posts on Batman & Robin:
Robin's Romance with Batgirl
Worst Batman Story of the Silver Age
A Salute to Batman Annual #1
The Disappearance of the Catwoman
Gay Batman?
Favorite Covers of the Golden Age: Batman #23
The Horrifying Batman Era in Covers: Detective
Batman 1957
Batman and Guns
Batman 1956
Batman 1955
Classic DC Sagas of the 1960s
The New Look Batman
Posted by Pat at 6:24 PM

Email ThisBlogThis!Share to TwitterShare to FacebookShare to Pinterest
Labels: Ace the Bathound, Batman