Will he save the West? Or ruin it?

That was the tag line for DC's rather interesting Bat Lash series from the late 1960s. First off, I don't have a clue as to why DC named a series Bat Lash in the summer of 1968. Batmania had died down, the show was canceled and so there did not seem any obvious reason for the name of the character.

Bat Lash is interesting because he's really the first DC anti-hero. He reminds me of Maverick, in that he's as likely to cheat at cards as he is to defend a lady from being kidnapped: 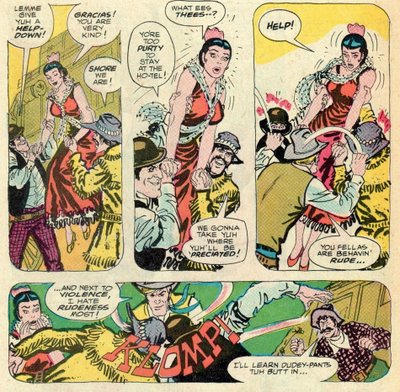 (Art by the amazing Nick Cardy, story by Sergio Aragones and Denny O'Neill)

The comic appears to be aimed at a slightly older demographic than most of DC's other titles given this gag: 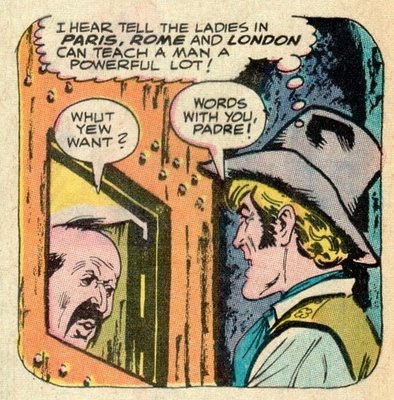 Amusingly, Bat Lash professes to hate violence (and wears a flower in his hat), although he engages in it with appalling frequency. One notable thing about Bat Lash: There seems to be a lot of killing going on. He kills three or four men at least in the first issue of his own magazine. This is fairly atypical in a Silver Age comic.

I'll try to read a couple other issues and see if there's anything substantial I've missed with the character.

Update: I read Showcase #76, the only tryout issue for Bat Lash. Same general theme, with the guy who wants to be a poet and a lover forced to fight for his life. Oddly the Bat Lash #1 story doesn't quite mesh with this issue. The debut ends with Bat Lash locking up his new girlfriend for trying to poison him, while Bat Lash #1 starts with him in jail and her busting him out. Maybe different women, same look?

Bat Lash #6 might be considered the origin tale of Bat Lash. He was the son of a farming couple with a young sister and a girlfriend next door. His family is excited when a traveling preacher discovers oil on a desolate section of their land. The preacher suggests that they sell the farmland for the money needed to develop the oil wells. Of course, it all turns out to be a scam, there was no oil. When Bat goes into town he discovers that the preacher and the sheriff were in on the deal. He confronts them and shoots the sheriff in a gun battle.

After evading a posse, he heads back to his family's farm, where he discovers that his parents and his girlfriend's parents have been killed by Rickett, the man behind all the land purchases. His sister and his girlfriend were fortunately out picking berries, but his brother is missing. After seeing the girls to a convent, he starts avenging his parents' murders. Eventually he tracks down the final man, the preacher who started it all. Then he heads back to the convent, only to learn that his sister and his girlfriend have decided they want to become nuns. They are afraid of him, because he's become so violent and so hard.

Overall I enjoyed the three books I read in this series. The art is by Cardy and the stories are entertaining and lighthearted (except for that origin issue, which is pretty grim). Bat Lash was a much better character than I had remembered.
Posted by Pat at 1:06 PM