Spiderman (no, I'm not going to use the hyphen) debuted in Amazing Fantasy #15. It was the final issue of that title. Reportedly sales of the comic were good enough that Marvel decided to grant Spidey his own magazine.

The first major story arc ran from Amazing Spiderman #1 to #19. In those issues we saw the beginnings of the themes that would dominate the decade and turn Spidey into one of the hottest characters in the comic book world. 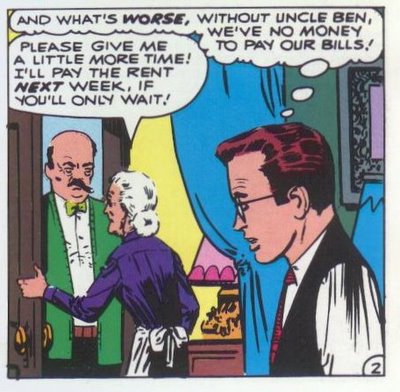 Money of course is a common problem. Peter briefly considers a life of crime, but can't live with the fear that he will be caught and break Aunt May's heart.

Gee, lack of popularity? None of us have ever had to deal with that!

Parker meets with a booking agent and puts on a show as Spiderman. But because he is not willing to divulge his identity, he asks that the check be made payable to Spiderman. This leads to his third problem: 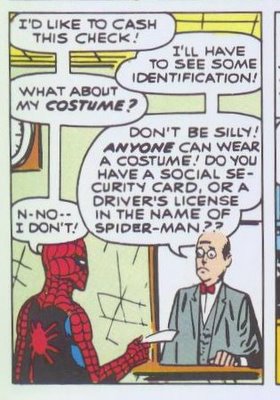 The fourth problem comes from a local newspaper editor. J. Jonah Jameson goes on a crusade against Spiderman, calling him a negative influence on youth.

None of his problems are resolved by the end of the first issue. In the second issue Peter realizes that he can make money by photographing himself fighting crooks. He attaches a camera to his belt, and goes into action against the Vulture, the first major villain in Spiderman's Rogues Gallery. The second issue also introduces Flash Thompson, Peter's high school nemesis.

The third issue introduces Spiderman's second most important villain: Dr Octopus. It also includes the first example of Spidey doubting himself, after being beaten in a fight by Doc Oc.

ASM #4 introduces the romance element into Peter Parker's life. Betty Brant is a perky brunette working for JJJ, while Liz Allan is a cute blonde who had actually agreed to go on a date with Peter. But with the Sandman causing problems and Peter broke, he can't keep that engagement.

The following issue has a crossover by Dr. Doom. Marvel, much more than DC, frequently had villains from one magazine crossover into another. It makes a lot of sense from a creative standpoint; why have to keep creating 10 villains for every hero, when you can just reuse a bunch that have been popular against another hero, especially when it gives you a different matchup. In the sixth issue, we meet Dr. Curt Connors, aka the Lizard. The seventh brought back the Vulture for a second battle with webhead.

The eight issue features two stories, including a Kirby short featuring a semi-serious battle between Spiderman and the Human Torch over the latter's girlfriend, Dorrie. The main story features Spiderman battling a robot.

All this time, Lee and Ditko were doing little things with the character. Peter and Betty Brant seem to be getting closer in this scene from #7: 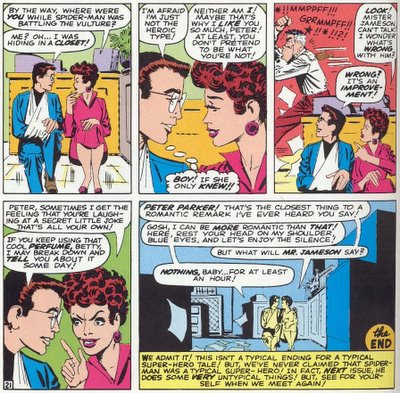 We discover that there is some secret in her past in Amazing Spiderman #9: 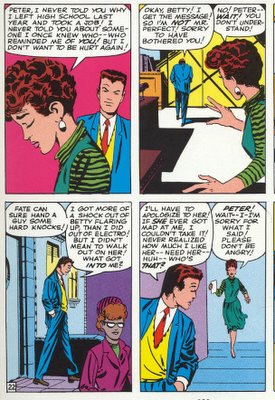 This issue also introduces the handy plot device of Aunt May's fragile health, which adds to Peter's woes immeasurably over the years.

In the tenth issue, Betty gets involved with some minor crooks; apparently she borrowed money from a loan shark. By the end of the story she has disappeared, including leaving her job. Spidey finds out where she's gone in the following issue, in which, to his shock, she picks up Dr. Octopus when he is released from prison. We learn that she's doing it to protect her brother, a lawyer who made the mistake of gambling over his head and now must do the bidding of the crooks. Unfortunately, while Spiderman is battling the hoods, a stray bullet kills Betty's brother. Betty irrationally blames it on Spiderman, unknowingly driving a wedge between her and Peter Parker.

The next two issues featured solid battles with Doc Ock and Mysterio. Amazing Spiderman #14 introduced Spiderman's biggest enemy, the Green Goblin. And we pretty quickly see that the Goblin is unlike many of Spiderman's other foes. He starts out determined to destroy Spiderman, while the others have only gotten angry at him when he starts foiling their crooked schemes.

He plots to get Spiderman to agree to appear in a movie featuring himself and the Enforcers, a fighting trio that had battled Spidey in ASM #10. Of course, Spiderman thinks it will simply be fake fighting, but the Goblin and the Enforcers are planning on battling for real. But their plan goes awry when it turns out that the cave that they are fighting in also contains the Hulk, who battles both sides. The Goblin escapes.

ASM #15 and #16 were mostly one-offs featuring Kraven the Hunter, a new villain, and the Ringmaster and his Circus of Crime, who had previously battled the Hulk. The latter also featured an early crossover by Daredevil into ASM.

The Green Goblin appeared again in ASM #17. Flash Thompson has started a Spiderman Fan Club and everybody's going to show up to demonstrate their support for Spidey. But the Goblin arrives as an uninvited guest, and he battles the wall-crawler. The crowd at first enjoys the fight, assuming it's all an act. But at a crucial moment, Spiderman overhears somebody on the phone saying that his Aunt May has had another heart attack and is in the hospital. He runs away from the battle, but fortunately the Human Torch is there to convince the Goblin to leave.

This issue also introduces (on the telephone) Mary Jane Watson. In a long-running gag, Peter would often hear of this wonderful young lady that Aunt May wants to fix him up with, but they never quite seemed to meet.

In the next issue the town is buzzing with the news that Spiderman has turned yellow. It's apparently confirmed, when he ducks a fight with the Sandman in front of a crowd. The Bugle of course publishes the news prominently and worse still, he finds out that Betty is dating another young man. In a fit of anger, Peter resolves to give up web-slinging. But then he finds Aunt May out of her wheelchair and walking about. She gives him a little spine-stiffening here: 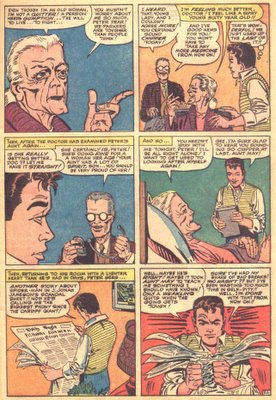 Of course, this little pep speech results in Peter resuming his career as Spiderman, and in the following issue he strikes back in convincing fashion.

The themes and plot devices explored during these issues would recur many times over the years. Betty Brant blamed Spiderman for her brother's death; Gwen would blame him for her dad's; Harry for his father's; and Ned Leeds for Gwen's. His romances would continually be threatened by his Spiderman identity. His Aunt would always get sick at inconvenient times. And he would often contemplate giving up crimefighting.
Posted by Pat at 4:38 PM