A Team of Freaks and Outcasts

Led by a man in a wheelchair. Sound familiar? Well, yes, it describes the X-Men. But it also describes a group who debuted months before the mutants: the Doom Patrol. 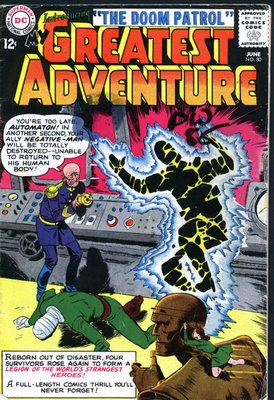 Sounds a bit like Marvel ripped off DC for the X-Men, but then again they were just returning the favor, since DC had clearly ripped off Marvel when creating the individual members of the Doom Patrol. Compare the DP to the Fantastic Four:

Elastigirl, despite the name, does not really stretch so much as she can vary her size from huge to tiny. Negative Man is charged with energy which means he can leave his body and fly around much like the Torch. And Robot Man is very comparable to the Thing in that he's constantly griping about his exterior appearance. Of course, there is no comp for the Invisible Girl; I suspect DC did not find her interesting enough to copy.

In addition, the members of the Doom Patrol frequently bicker among themselves. This was clearly inspired by the FF's continual taunts between the Torch and the Thing. No other DC team of the time had that pattern. Indeed one could virtually guarantee that if two DC heroes argued in an issue it meant either a) they were deceiving somebody; b) one was an imposter, or c) they were under some weird influence like magic or red kryptonite.

The Doom Patrol debuted in My Greatest Adventure #80, the June 1963 issue. MGA was a long-running title that previously had features stories written in the first person, with titles like Free Me from the Bewitched Bell or The Creature We Dared Not Kill In the early 1960s it had turned into the monster of the month club, much like the other DC mags edited by Jack Schiff at the time.

The story began with three people summoned before a mysterious stranger in a wheelchair. The Chief (as he is known) explains that he has trained himself to be an expert in virtually every field of knowledge (shades of Doc Savage!) and that he goes on adventures of the mind. But there are adventures he cannot undertake because of his physical limitations. He wants the three to undertake those adventures for him.

We meet Rita, the actress who inhaled volcanic fumes while filming a movie which gave her the power to change her size dramatically (and uncontrollably at first). We meet Larry, who was subjected to radiation while testing an experimental plane which caused Negative Man to appear. We learn of Negative Man's, err, negatives--while active Larry's human body is weak, and if he doesn't return in 60 seconds Larry will die. And we meet Cliff, who destroyed his body in a racing car accident, but was saved only by transplanting his brain into a robot--a transplant performed by the stranger in the wheelchair. Cliff hates his new body because he was a former world class athlete and now nobody will compete against him because he's not human.

The second part of the story shows the crew in action. A bomb has been left at the docks; can the Doom Patrol find and deactivate it in time? Negative Man searches for a bomb with a device made by the Chief. Once it's there, Elastigirl shrinks down and defuses it. Robotman shows his value by holding the bomb against himself to shield the Chief. Errr.

And in the third part of the story we see them up against a real villain. General Immortus was described as "as old as time". When the Doom Patrol battles him, he claims to have weapons that will nullify each of their powers. Sure enough, as Robotman attacks, a polarization ray shuts him down. Similarly General Immortus has a radio interference gun that allows him to trap Negative Man outside Larry's body. But there is one thing he hasn't counted on: 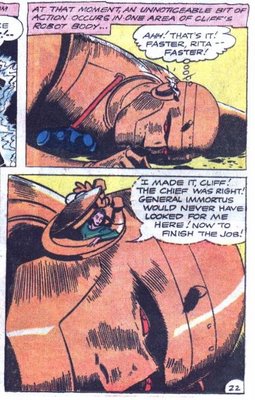 Rita is able to shut off the polarization ray, freeing Cliff, who can then save Larry by crushing the radio interference gun. It's a neatly designed ending to an interesting debut. DP would be featured in the next five issues of MGA, with the title changing to Doom Patrol effective with issue #86.

In something of an oddity, MGA #82 features both Rita and the Chief smoking cigarettes, which is required in order to introduce a camera that has been concealed in Rita's lighter. 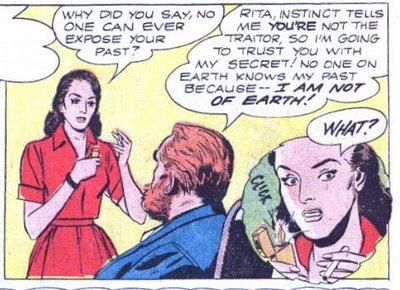 Several DC characters had smoked over the years; Bruce Wayne's early appearances often showed him with a pipe. But I can't recall another female character who smoked. Is Rita a trailblazer (and a trailender)? Of course, the story about the Chief being from another planet is just a trick.

Doom Patrol made it to #121, but it was cancelled after that Sept-Oct 1968 issue. Their knockoffs, the X-Men, would last another year and a half before also slipping into hibernation.
Posted by Pat at 4:58 PM

Were the X-Men a copy of the Doom Patrol and the DP swiped from the Fantastic Four? Maybe. But then, some people suspect that the FF were influenced by the Challengers of the Unknown.