As I have remarked before, there was a vast difference in the origins of DC heroes and Marvel Heroes. The Marvels, perhaps reflecting early 1960s paranoia, frequently owed their amazing powers to radiation--The Fantastic Four and Spiderman, for example.

The second major Marvel hero was the Hulk. Yes, I know the Ant-Man technically debuted before him, but that's trivia. The Hulk stepped right into his own magazine, while Ant-Man appeared in just one issue of Tales to Astonish before disappearing until a few months after the Hulk's debut.

The story begins in Hulk #1. Dr Bruce Banner is supervising a gamma ray weapon's testing. His assistant, Igor (Lee never was one for subtlety), is jealous that Banner has guarded the details of the weapon. As the device is about to be tested for the first time, the scientist is horrified to spot a teenager driving his jalopy onto the range. He races out to rescue the boy, but his assistant, seeing his opportunity, makes sure the ray is fired before Banner can get out of the way.

At first there seems to be no significant ill effects, but then suddenly Banner feels a weird change coming over him: 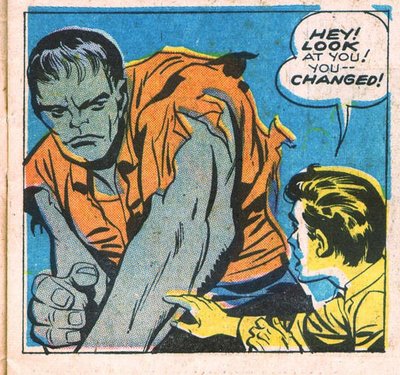 He escapes from the army facilty. He and the teenager (Rick Jones) catch Igor trying to steal the secret of the gamma ray weapon. But then we discover what has turned Banner into Hulk and vice versa: 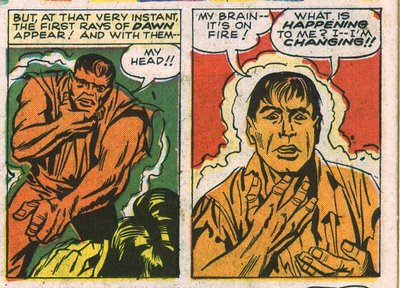 This explanation would not last long, for it would have made the Hulk's transformations far too predictable.

The Hulk was obviously inspired by Robert Louis Stevenson's Dr Jekyll and Mr Hyde. In the first issue he and Rick are kidnapped by a hideous mutant named the Gargoyle, but when Banner offers to help him live a normal life, he lets them escape.

The second issue is a rather pedestrian alien invasion story. Marvel seemed to do this with a lot of their heroes in the second issue--the FF faced the Skrulls, Spiderman battled the Terrible Tinkerer (who turned out to be an alien) and The Avengers battled the Space Phantom. The aliens in this Hulk story turn out to be the Toad Men, whom Banner is able to defeat with his gamma ray weapon.

The interesting part of this adventure is that Rick Jones and Banner come up with a way to apparently lock up the Hulk at night. He's buried behind a 10-foot wall of concrete until the sun comes up in the morning.

In the third issue, there are three separate stories. In the first, General Thunderbolt Ross, who's always hated the Hulk (and Banner) tricks Rick Jones into decoying the Green Giant into a rocket ship. The General then sends the rocket into space, getting rid of the Hulk forever. He turns into Banner briefly, but then is bombarded by radiation. Apparently this transforms him so that his switches from Hulk to Banner are no longer governed by dawn and dusk. The second story is simply a brief retelling of the Hulk's origin.

The third story is more interesting; it features the first appearance of the Ringmaster and his Crime Circus; they would later appear in two issues of Amazing Spiderman and one issue of Journey into Mystery/Thor. The Ringmaster has the ability to hyptnotize people with his tophat; but Rick is quick enough to send a mental message to the Hulk for help, who busts up the crime scheme.
Posted by Pat at 8:21 PM