The first Batgirl was the niece of Kathy Kane, who had become Batwoman in Detective #233. When Betty Kane comes to visit for a vacation, the young girl quickly realizes that her aunt is secretly Batwoman. She decides to emulate Kathy and quickly designs a uniform: 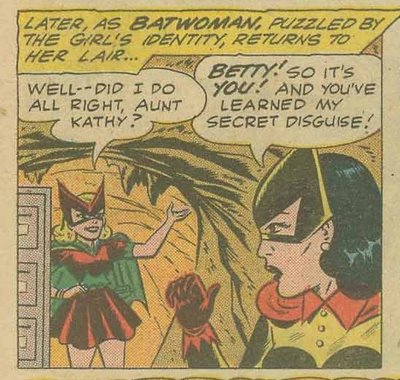 Kathy is of course worried for the youngster, and after consulting with Batman, decides to require that Betty receive significant training before she can start crime-fighting, with the idea that this will discourage the young lady. Inevitably, Betty decides that she's ready on her own and attempts to capture the criminal gang Batman, Robin and Batwoman are hunting at the time. She gets caught instead, but is able to signal her location, which results in the gang getting caught. In the end, she displays some rather obvious affection for Robin despite his obvious embarrassment: 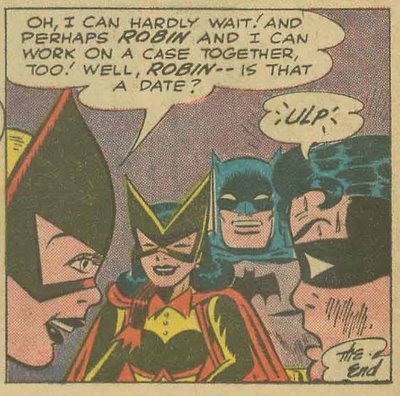 Over the next couple of years, this relationship was always a part of the Batgirl appearances. The next time Batgirl popped up in a story was in Batman #141, and she started pushing forward the romance a bit, still despite Robin's obvious timidity:

Batwoman knows a good thing when she sees it.

Batgirl returns in Batman #144, and this time she's determined to let Robin know how she feels:

Batgirl is upset that there's another woman in Robin's life. Batmite appears and offers to help her win the Boy Wonder's heart. Through a series of incidents, we see that Robin really does care for her, and that the other "woman" is the statue in the background of the panels above: Lady Justice. He explains: 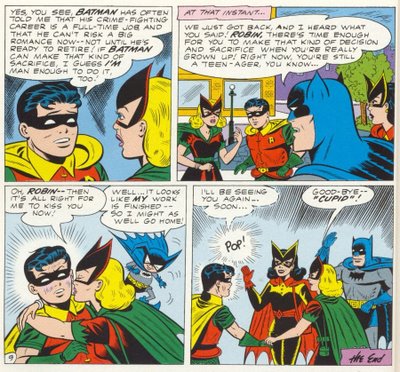 After that it was a full year before Batgirl appeared again, in Batman #153. But DC made up for the lapse by making this Batman's first ever book-length story, and one that featured prominently the continuing romance between Robin and Batgirl:

As usual, Batgirl makes the move, but this time Robin seems noticeably less resistant, especially considering this sequence later in the story:

And we can see that Robin is quite pleased to see Betty in this sequence: 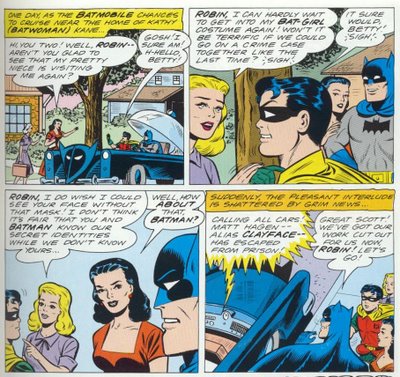 Even Auntie Batwoman feels that Betty pours it on a little thick here:

The story ends with Robin expressing his appeciation for Batgirl here: 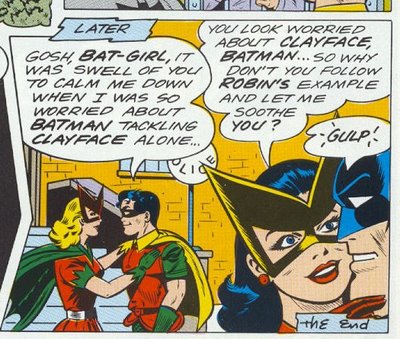 I'd love to say that DC developed this romance throughout the decade, but in fact Batgirl was basically through. She popped up in Batman #163 but this was one of Alfred's fantasy adventures of Batman II and Robin II. In Batman #164 DC inaugurated the "New Look" Batman, in which most of the characters who had become the Batman Family were killed off either literally (in the case of Alfred) or politically (like former Soviet heroes who disappeared from official photos).

Betty was disappeared, as was her aunt Kathy. This whole terrific little romance that DC had built up over time simply blew away like autumn leaves. It was a sweet little sequence that deserves to be remembered among the general mediocrity of the Silver Age Batman.

Previous Posts on Batman & Robin:
Worst Batman Story of the Silver Age
A Salute to Batman Annual #1
The Disappearance of the Catwoman
Gay Batman?
Favorite Covers of the Golden Age: Batman #23
The Horrifying Batman Era in Covers: Detective
Batman 1957
Batman and Guns
Batman 1956
Batman 1955
Classic DC Sagas of the 1960s
The New Look Batman
Posted by Pat at 5:49 PM

So I think we know now who Dick lost his virginity to then? I mean, it's fairly obvious, isn't it? Kind of a sweet little touching bit of backstory that usually never gets (and never *should*, tbh) discussed in-universe :D

Everyone does it, we all wonder weird, silly, stupid and private things about our heroes and etc. "Does the Thing have an orange rocky penis?", "Does Wolverine indulge in bestiality when he turns feral?", "Does the Hulk have green toejams (and other bodily excretions?", etc. etc. etc. etc.

And for the most part, those discussions are fine, healthy and funny...and they should be left exactly where they belong: on the schoolyard playground where the recess and lunch bell rings :I but all too often, grown up children at comics-books companies make "stories" out of retarded concepts that stem from ideas like these and don't really belong anywhere but in the silly, *unprinted* imaginations and discussions of underdeveloped, underexposed and overaged adolescents and pre-teens.

It's really quite refreshing to see a cute little story of young love such as this because, even if it necessarily skirted around the issue and kept things rather *innocent*, it still showed exactly what the power of inference and the technique of "show don't tell" does when they are used to heighten the events rather than to spell out blatantly for all to see ("Hey, Batgirl...you wanna do sex?", see? Doesn't really have the same effects :D)