The Dev-Em Made Me Do It!

Dev-Em was a teenage boy who lived with his parents next door to Jor-El and Lara. First appearing in Adventure #287, he was a juvenile delinquent, as we can see here: 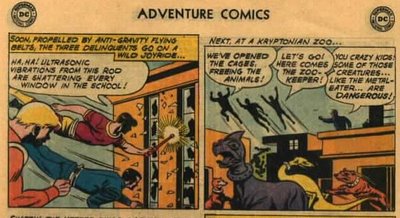 He likes to steal inventions from other people. Sensing that perhaps Jor-El is onto something with predictions of doom for Kryton, Dev-Em secretly steals scientific equipment to turn the lead-shielded bomb shelter in his backyard into an escape pod, at one point getting caught by Kal-El and vowing revenge on the tyke. When the planet finally explodes, he survives in suspended animation along with his parents until they reach Earth. Discovering that Superboy is the planet's greatest hero, he decides to get even.

The story continues in Adventure #287. After luring Superboy back to his pod, Dev-Em surprises the Boy of Steel with a Phantom Zone projector (aka Punishment Ray). He disguises himself as Superboy and commits nasty acts both great and small, earning his enemy a despised reputation in Smallville and beyond. Then he allows Superboy to return, knowing that he's ruined the lad's life. Dev-Em flies off with his parents "to a bright future".

Superboy tries to explain to the townspeople about his double, but they don't want to hear about it, and he prepares to leave earth forever. But then Chief Potter discovers that an award Superboy had received contained a small amount of red Kryptonite which he claimed had caused Superboy's wild behavior. Since red Kryptonite never affects him the same way twice, the people know he won't go wild again and they forgive him. Afterwards Chief Potter admits privately to Superboy that there was no red K, that he just faked it because he believed Superboy's story. In the end, Superboy vows to pursue Dev-Em into the future someday.

Oddly this did not happen for quite some time. In fact it wasn't until Adventure #320 that Dev-Em returned, this time 1000 years in the future during the era of the Legion of Super Heroes. Superboy and Mon-El catch him trying to break into the Legion HQ. When they threaten to turn him into the ICC (apparently a CIA successor), Dev-Em laughs: 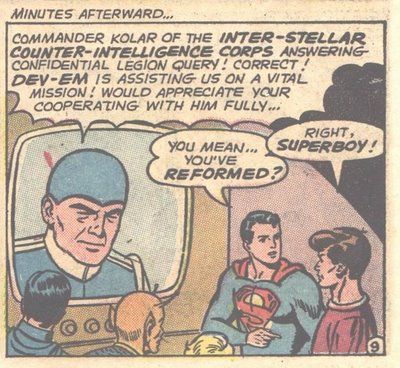 Dev-Em's assignment is to locate and capture Molock, the leader of a criminal spy organization called the Cosmic Spy League. But since Superboy now knows of the operation, the ICC decides to put him in Dev-Em's place. Is Dev-Em jealous? Superboy notes an odd look on his former enemy's face.

It turns out that when Superboy (disguised as Dev-Em) meets Molock, the crook has a surprise for him: 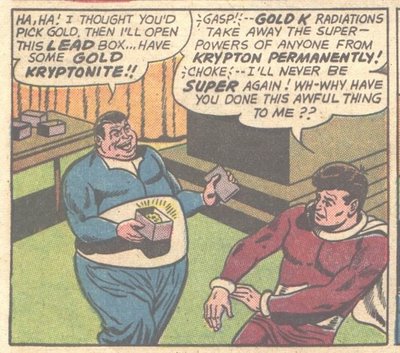 Fortunately it was not really Gold K in the box, but Proty II (See comment below), who had changed himself to look like the power-stealing metal and gotten rid of it. As a result of this deception, Superboy is easily able to defeat Molock and bust the spy ring. It turns out that Dev-Em had worried about the Gold K, and Proty II had read his mind and realized the potential danger.

There is an amusing bit at the end where Dev-Em is offered membership in the Legion, but turns it down in favor of continuing his career as a spy. Mon-El is shocked, so shocked that his memory is faulty. He thinks: "Sizzling comets! This is the first time in the Legion's history that anyone ever turned down a chance to join it!"

Of course, that is not true; in Adventure #315, Stone Boy of the Legion of Substitute Heroes had been offered a chance to move up to the big club, but decided to stay with his former mates.

Dev-Em had a major "appearance" in Superboy #128. Superboy has a series of dreams where Krypton survived, so Kal-El grows up next door to Dev-Em. Somehow Dev-Em doesn't age, so when Kal becomes a teen, Dev is only a couple years older. In the next dream, Dev turns Kal to evil with the help of a special gem, and Kal is eventually sent to the juvenile wing of the Phantom Zone. In the following dream, Jor-El decides to send Dev-Em to Earth as Krypton's sole survivor. But Superboy finally realizes what is happening; an evil dog that Dev-Em had on Krypton is imitating Krypto and using its telepathic powers to influence Superboy's dreams. So Dev-Em does not really appear or resume his life of crime in this issue.

He did not appear again in the Silver Age. DC had reformed a few characters before this, including the Catwoman/Selina Kyle and Mr Element (Al Desmond), but those conversions were tenuous. Dev-Em's transformation appeared to be complete and thus to a certain extent he ceased to be an interesting foil for Superboy.

Comment on Proty. It seems obvious that Proty I and Proty II should have been full-fledged members of the Legion of Super-Heroes. The two had performed heroically, with one laying down his life for Lightning Lad and the second saving Superboy's powers. The only reason for them not being in the Legion was that Proty I had behaved like a pet in terms of showing affection for Chameleon Boy. But both Protys showed high levels of intelligence and the ability to communicate that intelligence. Indeed, in Adventure #323 Proty II devises a puzzle to determine the next leader of the Legion. I suspect that Proty suffered from rank speciesism, that the Legion could not contemplate a member who wasn't basically humanoid.
Posted by Pat at 6:20 PM