The first member of the Inhumans to appear was Madame Medusa (later mostly referred to simply as Medusa). In FF #36, three villains team up. Paste-Pot Pete and the Wizard, two Human Torch villains from his series in Strange Tales, align themselves with a former Spiderman nemesis, the Sandman. The Wizard suggests calling themselves the Frightful Four, but obviously they are one female member short of matching up with the Fantastic Four. He knows of a woman they can recruit, who has the amazing power of using her long, red hair as a weapon:

Sue and Reed wonder where she came from here: 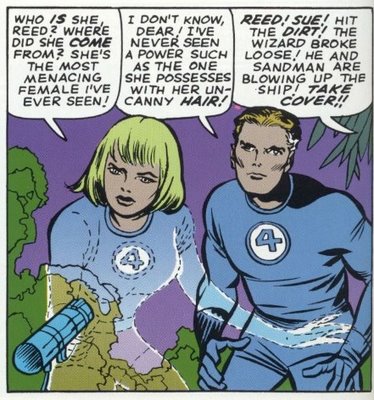 But although the Evil FF are featured quite prominently over the next several issues, appearing in FF #38, 41, 42 and 43, we do not find out any more about the background of Madame Medusa until #44. At the end of FF #43, the three male members of the Frightful Four are captured and turned over to the police. But Johnny inexplicably lets MM escape here: 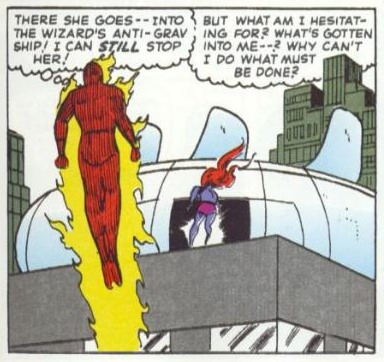 The next issue occurs following the marriage of Reed and Sue (which took place in FF Annual #3). Madame Medusa is being chased by a new character named Gorgon, who has immense power in his hoofed feet. Gorgon gives us a bit of an explanation here: 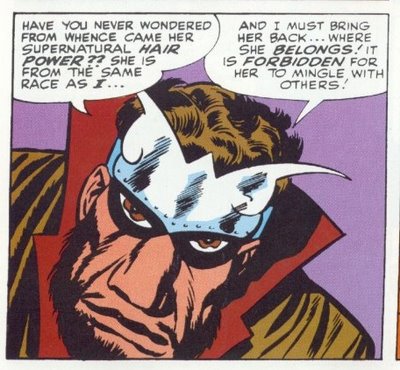 At the end of the story, Gorgon has apparently captured Medusa and vanished. The story picks up again in FF #45. Johnny, upset that his girlfriend, Dorrie Evans, has a date with another man, finds himself walking aimlessly through a deserted neighborhood of the city: 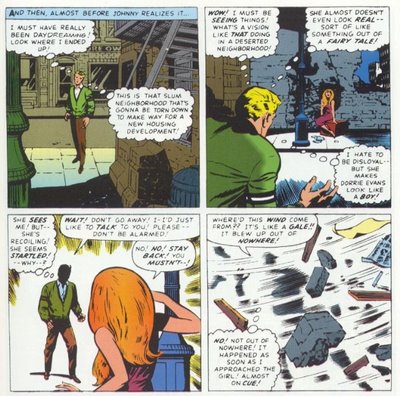 The girl turns out to be a member of the Inhumans. Believing Johnny to be one of them due to his superpowers, she confides in him: 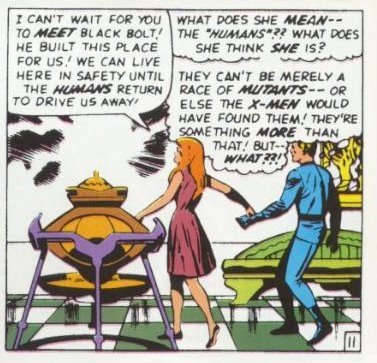 But she quickly learns that Johnny is not among her race when they encounter Gorgon and Medusa. The Torch is briefly imprisoned, but he escapes and calls for his buddies.

The battle spills over into FF #46, where Black Bolt tangles with the Thing. At first we are unaware of BB's power. He's clearly a good fighter, as he's able to battle Ben to a standstill. Reed deduces that the tuning fork on Black Bolt's forehead converts energy into strength and speed. Oddly enough, the only member of the Inhumans who doesn't burst into fighting the Fantastic Four is Madame Medusa.

The next part of the background of the Inhumans is revealed here:

The Seeker? Hmmm, the Who had a song about this time (1966) called The Seeker:

They call me the Seeker,
I been searching low and high.
I won't get to get what I'm after
Till the day I die!

Anyway, we meet the Seeker here: 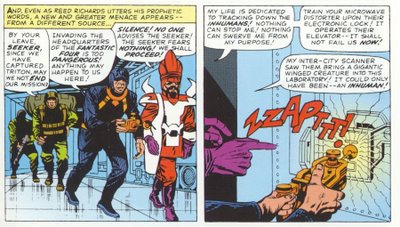 The FF eventually catch up to him, and he explains their history. They were an advanced race on Earth, with the ability to manipulate genes at will. As a result, they set up a super-powered society. However, the humans multiplied faster and battled against the Inhumans upon sight. So the Inhumans hid themselves away in the Great Refuge.

Black Bolt should rule the Inhumans, but his brother Maximus the Magnificent has usurped the throne. An aside: Ever notice that in the DC universe, other societies frequently are run by some sort of Science Council-e.g., Krypton, the future Earth of the Legion of Super Heroes, while in the Marvel universe they tend more towards dictatorships (benevolent or otherwise), like Asgard, the Inhumans, the Skrulls and Latveria?

Medusa is betrothed to Maximus, although she really loves Black Bolt. We also learn that Black Bolt is a mute due to some "accident". But Black Bolt seizes back the crown from his brother. Meanwhile, the FF has found the great refuge, hidden high in the Andes of South America. Maximus uses his Atmo Gun in an attempt to destroy the FF and all humanity, but it fails. This convinces Medusa that the Inhumans are not a separate race, but are related to humans. However, before we can absorb that, Maximus pulls the ultimate gambit. He seals off the Great Refuge from the rest of the world with a "Negative Zone". The FF, despite Johnny's attempt to remain with Crystal, escapes before the Zone can become hardened.

This takes us midway through Fantastic Four #48, but the story shifts abruptly to the Silver Surfer and Galactus' first appearance, followed by the introduction of the Black Panther in FF #52 and 53. There are abortive attempts to free the Inhumans in several issues that follows, but it is not until FF #59 that Black Bolt himself finally shatters the barrier.

Previous Posts on the Fantastic Four:

Another Embarrassing Mistake
The Fantastic Four
Posted by Pat at 6:36 AM

Madam Medusa was the best member that The Frightful Four ever had. It would be neat to see Medusa fight Sue Storm again.

What a nostalgic storyline it would be as we approach the 50th anniversary of the Fantastic Four, to see Medusa become evil once again and return to the Frightful Four to capture the lovely Sue Storm.

Medusa was/is one of my favoriate Marvel females. I don't know why but her hair is just a cool look! Thanks for posting these panels.

Interesting to be reminded of the origin story of the Inhumans. Surely can't be the only person who's thought - Aren't the Inhumans very similar to the Eternals? Some of their key members are obviously based on characters from Greek Myths (Medusa, Gorgon). Or as the Eternals would have it their contact with humanity has furnished the stuff of Greek Myths. Think Jack may have been the one who came up with this plotting and not having been able to fully develop it returned to it later via the Eternals.