The Night of March 31st!--Updated

Superman #145 contained an interesting surprise for its regular readers; an oddball little adventure: 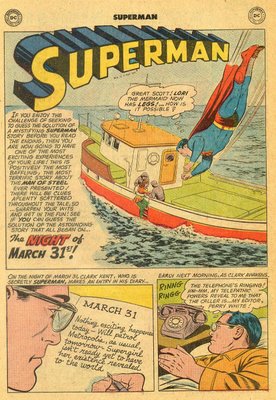 As you can probably see (click to expand pictures), the story featured lots of intentional goofs; for example, in the last panel above, Clark thinks about his "telepathic powers", which we know don't exist. This panel gives an idea of the goofiness going on: 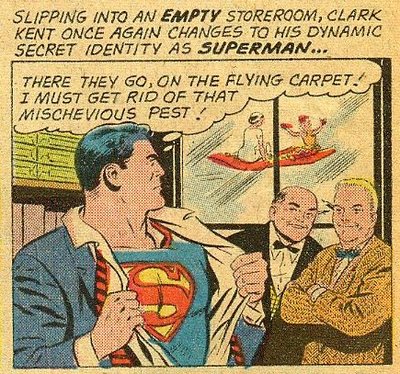 The explanation wasn't forthcoming until the very end of the story, which featured Luthor and Brainiac saving Superman from a villainous Lana Lang. After the action was over, you were supposed to turn the final page over for the solution to the riddle: 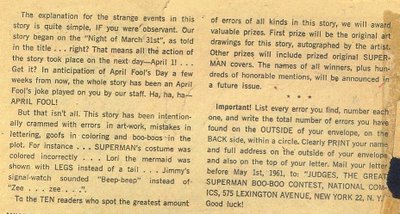 The results were announced in Superman #149: 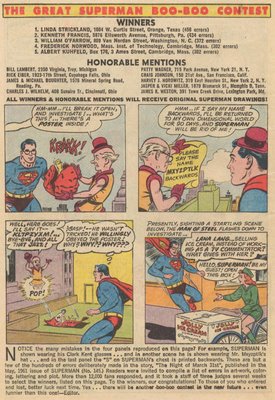 One hopes that Linda Strickland went on to become a great editor of Time Magazine or something similar. 456! And note one of the winners was at MIT--who says comics aren't educational?

Let's see how many errors we can find in the eight panels of the story I posted above:

4. Wouldn't Clark include the year in the date at the top?
5. Clark doesn't need his glasses when he's at home alone.

6. Superman doesn't have telepathic powers.
7. Even if Clark did wear his glasses at home, he wouldn't wear them in bed.

8. The description says the storeroom is empty but there are two men inside (possibly Weissinger and Swan?).
9. Superman changes in front of the two men.
10. They show no surprise at Clark changing into Superman
11. Clark is not wearing his glasses.

See the problem? We're about a quarter of the way through the story and we've got less than 1/18th of the errors that Linda Strickland found. You can argue for a couple more, but basically there should be about 10 errors per panel, which I'm having a tough time finding.

DC did a couple more contests during the Silver Age, including "The Great DC Contest" in Superman #169 and "Puzzle of the Wild World" from Action #388. The latter was another run at the "how many errors can you find" story, while the former in an oddity did not have the letters D or C anywhere in the text of the story, except for one place, which you were supposed to find. It turned out to be one of those "Continued on fourth page following" notices.

While we're on the topic of contests, Dial B for Blog has one involving my personal hero, BEM!

Update--Commenter StevenR points out that the MIT student who finished in the top 5 turned out to have an abiding love of comics. Frederick Norwood, we salute you!
Posted by Pat at 5:39 PM


"swan even got to draw himself and buddy Stan Kaye in one panel, watching Clark Kent change into his not-so-secret identity".